I don't know that much about electronics, but I was able to put together this PIR module: 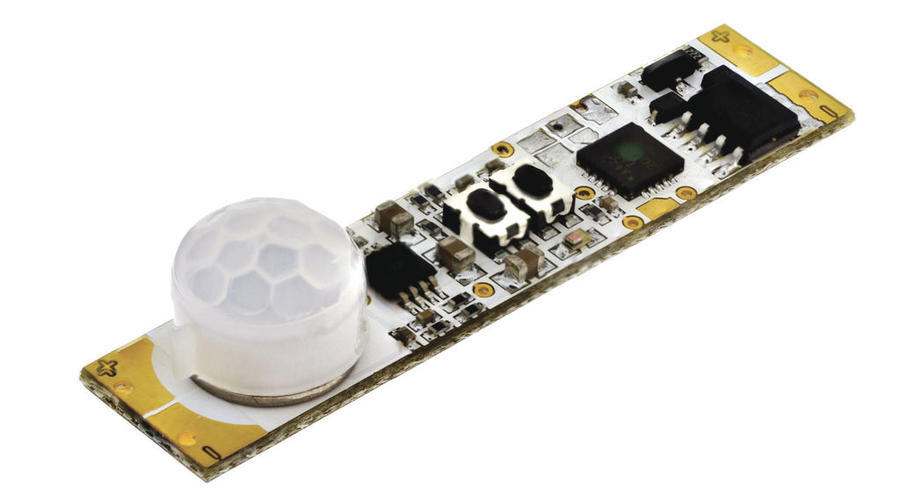 and a LED strip and everything works just fine, when the PIR detects motion, it turns the strip on. Then after set time (you can configure that with the buttons on the module, as well as brightness and other things) it turns off..

I would however like to have some sort of manual control over the thing - I just want to turn on the strip manually If I want to, I don't care about manually turning it off - I can do that at the side of power supply/socket. I thought I could just take my multimeter, probe a few points for continuity and finally end up soldering a simple on/off switch between the input and output of +12 rail on the sensor board (the two gold plates).

Would that work? Is there any possibility of damaging the board that way? If I am not mistaken, this should basically simulate two switches in parallel in a circuit right?

I understand that I would lose brightness control I programmed onto the board. Right now when the PIR tells the board to turn on, it only gives about 80% of input voltage on the output and that controls the brightness (I didn't see any flickering on camera, so it should't be PWM, but I could be wrong). Would there be another simple way of soldering a switch that would keep the board programming? Bypassing just the PIR and not the whole board maybe?

Sadly I don't have any schematic for the board.

Thank you very much, sorry for my english, not a native language. 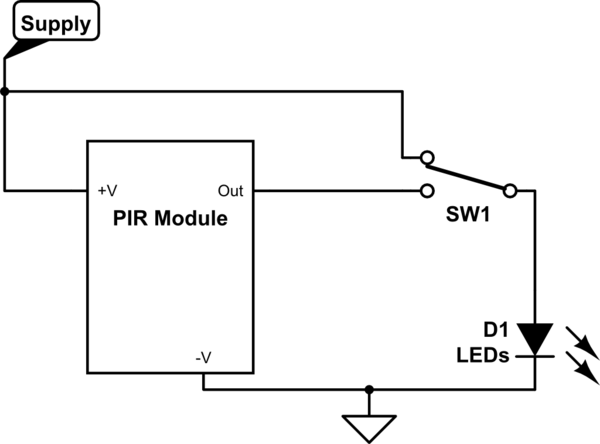 Without reverse-engineering the PIR module, you can't tell if applying +12V to the output when it's supposed to be low will damage it.

One solution would be to use a two-way switch to select either the output of the PIR module, or to override it.

Not the answer you're looking for? Browse other questions tagged led basic pir bypass or ask your own question.

0
How to amplify 3.3v to 12v (PIR and led strip light)
0
Triggering a LED and interrupting it quickly (with a PIR sensor). What do I need for this?
1
PIR sensor led strip with N channel mosftet
1
PIR sensor 3.3V output driving a mosfet loaded with 24V power LED
0
PIR motion sensor with MOSFET, optocoupler or Relay to turn on LED ribbon
0
Which N channel mofoset should i use for PIR sensor to turn on LED strip 12v 6A
2
TIP120 LED strip dimming with flickering problem + questions delay