How to solder to this glass pcb?

I have this glass PCB I took from a calculator that I'd like to get working with my Arduino as a numpad, but it's a glass PCB. Is there any way I could solder wires to it? 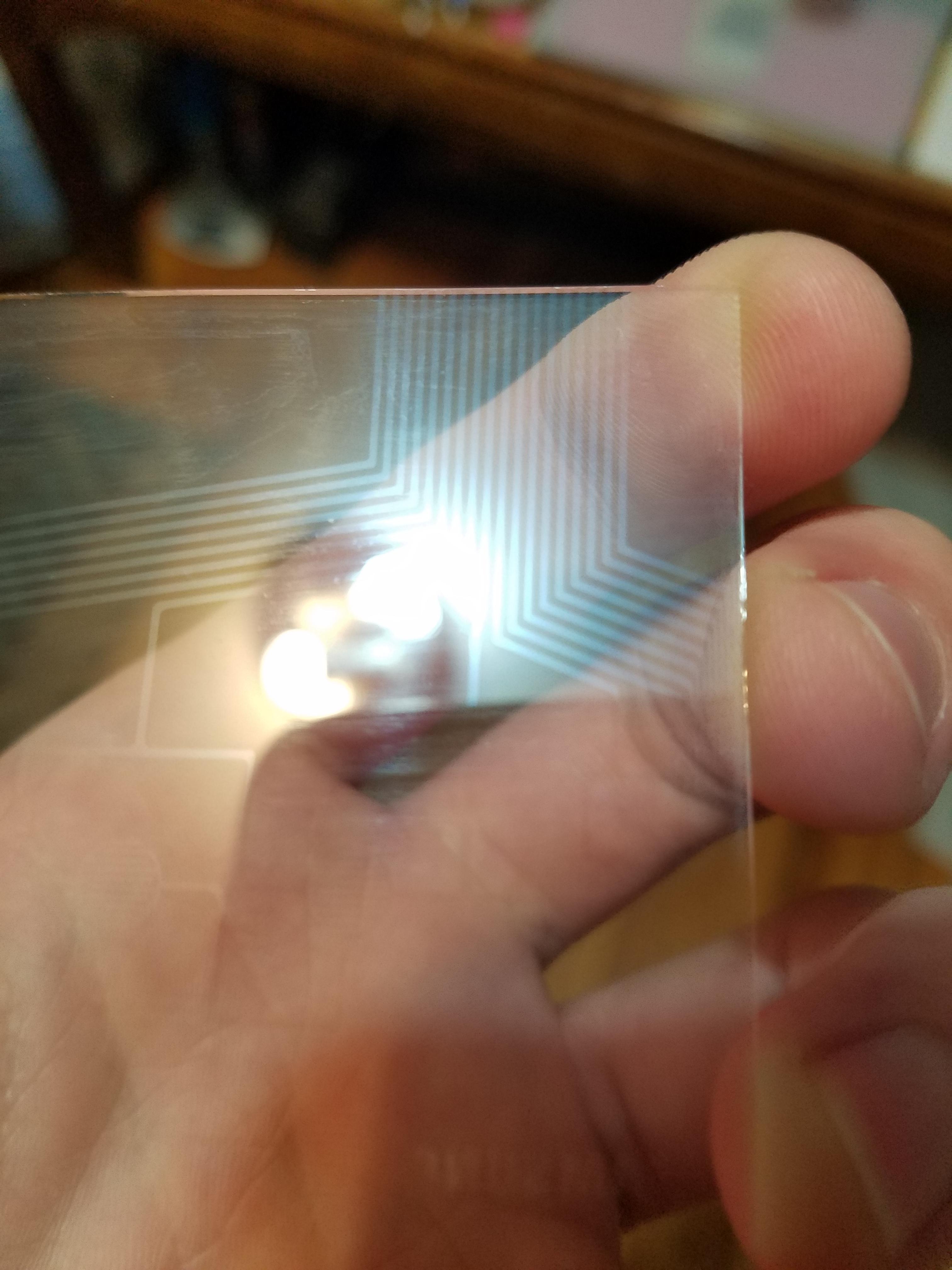 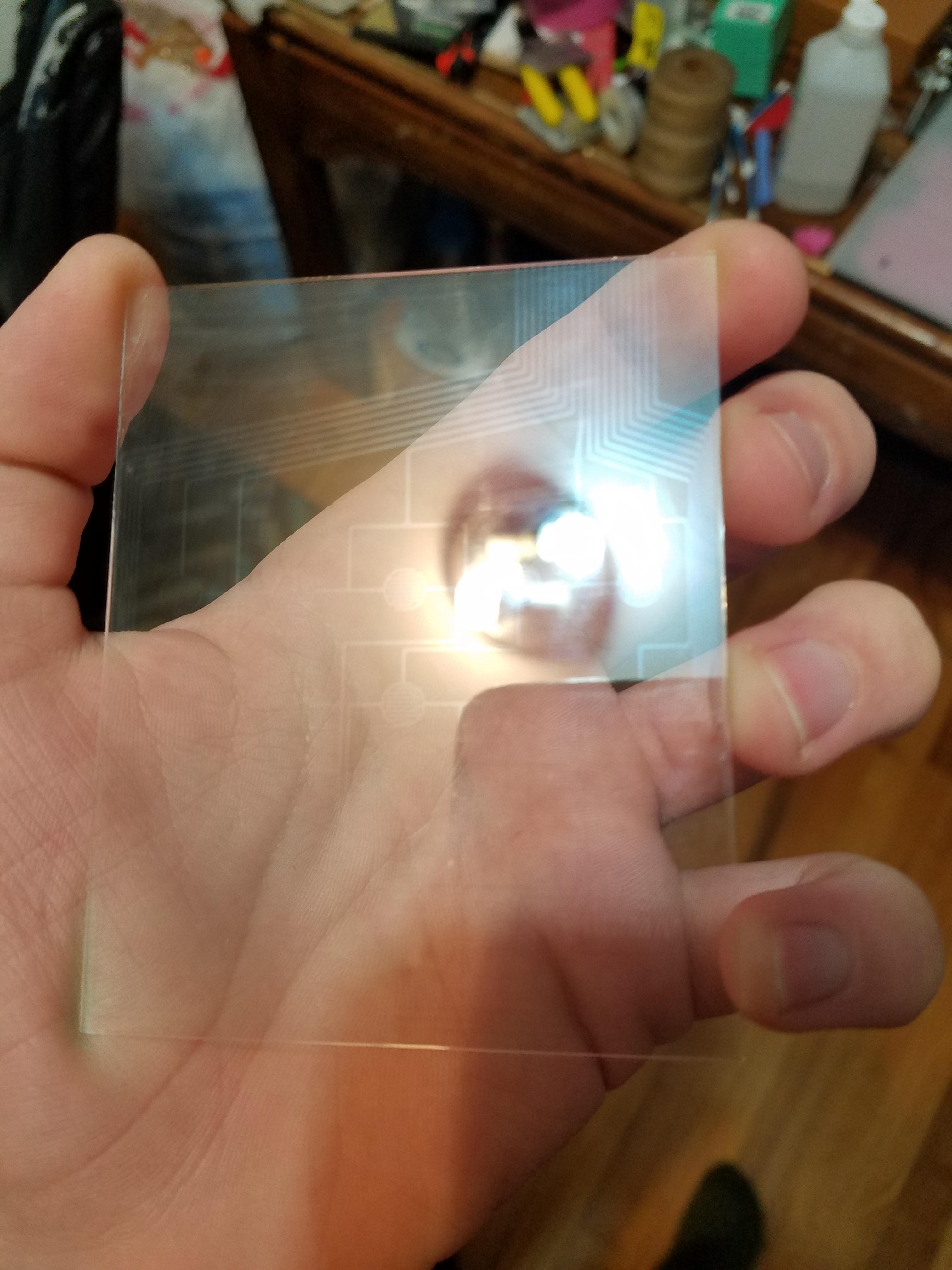 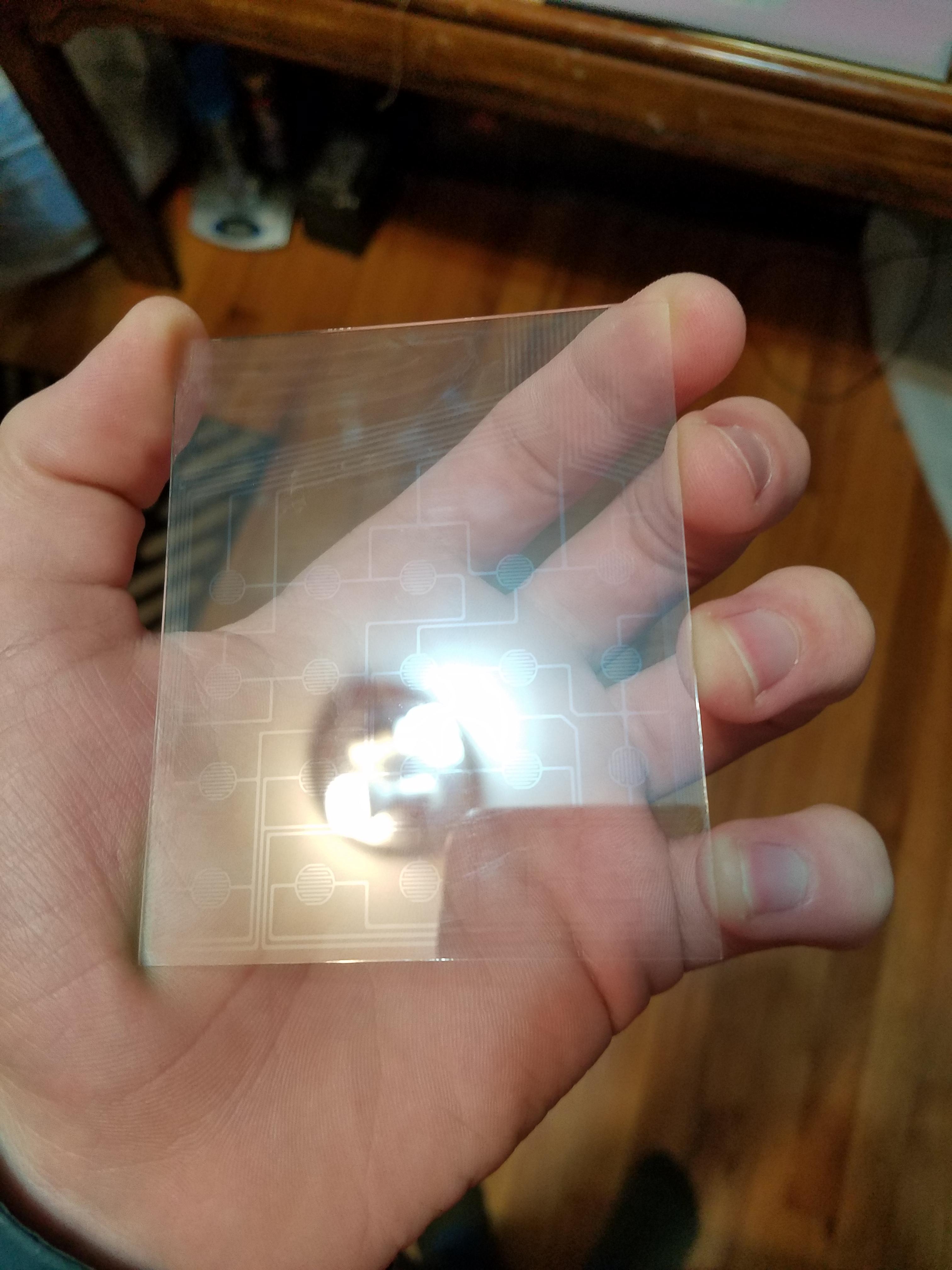 The transparent conductors are ITO (Indium Tin Oxide) deposited on glass. They're not easily solderable (perhaps possible with an ultrasonic soldering iron but even then they would likely be mechanically very weak).

You can use an elastomeric connector (zebra connector) as Dave Tweed suggests, but you'll need a closely matching pattern (preferably gold plated, or carbon printed) on a PCB.

It's also possible to use FPCs with conductive adhesive such as heat sealed types, but that's not practical for small quantities or one-off.

Silver-loaded or carbon loaded conductive paint might be a possible way to weakly attach to thin copper wires such as (stripped) AWG 36 magnet wire. I believe conductive paint is sold in auto shops for repairing heated car windows.

You can't, it's a very thin layer of printed-on metal.

As Dave says, you need a Zebra strip or similar pressure connector.

You can try using anisotropic conductive tape. Adafruit will sell you a 50mm x 150mm strip. It's double-sided tape that only conducts through the thickness of the tape when you press it between two surfaces. That way, you can make multiple independent electrical connections without shorting them.

Make a PCB with exposed contacts of the same pitch and geometry as that of contacts of the glass. Then sandwich the tape between the PCB and the glass. Obviously, be sure the conductive sides of the board surfaces face each other.

As mentioned by others these aren't meant to be soldered to. In theory with indium based solder it might be possible, but it's really not worth the cost of the attempt.

If this originally had a thermally bonded flex cable, you can often non-destructively remove those from the original board with a hair dryer.

You can then stick them to a compatible PCB footprint by effectively "ironing" them down - a clothes iron would work if it can fit, perhaps a sealing iron as used for model airplane covering film. I was able to get a solder station with a large curved tip to sort of work at low temperature, tested by touching against the side of the ribbon to make sure it would not melt it, then to make sure the temperature controller couldn't hit it with another bolus of heat actually powered off the iron before using the residual heat to iron the ribbon onto the board.

If it had zebra strips and you didn't break those, then with suitable fixturing you could probably do the same thing with a suitable footprint on a custom PCB. A 3d printer might help make something that would hold the display vs. board in the right place.

For an LCD display you'd also need to work out the column and segment mapping and figure out an appropriate driving circuit. Something generating about a volt or two of AC across two probes can be handy for exploring. You can also simply toggle GPIOs in opposite phase.

Edit: realized what was hiding behind your link was actually a keypad not a display, but much of the same still applies, except that you can probably sort out the connectivity visually. That said, for a keypad you might do better just making your own conventional PCB...

Not the answer you're looking for? Browse other questions tagged pcb soldering interconnect or ask your own question.

3
How to re-solder fine broken flex cable connection to pcb
2
Problem with solder
18
How to solder with one hand?
2
Attaching wires to flex pcb
2
How to solder PCB?
10
How To Repair Ripped Off Solder Pad On PCB
0
How to delete graphics from PCB board view in Eagle?
1
What is this white stuff on the solder of this PCB?
0
An alternative to solder, or a way to stop conductivity through solder?