I have discovered that there are relays like these available on the market that trigger at 3.75 V and have coil resistance above 370 ohm. I assume this would mean about 14 mA or about that might be within allowed limits of Raspberry PI.

How good is the idea to drive these relays directly from GPIO, without the amplifying transistor?

There are few similar questions of the site but I think they do not address this group of relays. If not, I would build a circuit as described here but I need a quick and very reliable solution, so less components may help.

The "3.75V" types are designed for 5V nominal so forget those. They need about 4V to operate reliably and the RPi will give less than 3.3V.

The 3V nominal types have a 137 ohm coil and will draw about 20-24mA from a 3.3V supply. That's too much to drive safely from the Raspberry Pi GPIO output. You could use a CMOS buffer but it would make a lot more sense to use a small MOSFET or BJT.

Note: You could parallel two outputs configured to maximum (16mA) drive and it would probably be okay if you can ensure that the outputs are always in exactly the same state. Not a chance I would like to take. The relay would get about 2.8V minimum and they need 2.6 so they'd be okay.

share|improve this answer
answered Jan 1 at 0:31

These Relays are designed for 3V, 5V CMOS logic "Directly triggerable with TTL standard modules such as 74ALS, 74HCT and 74ACT" (from spec) so which part are you concerned about?

Raspberry Pi uses the same CMOS as all other 3.6V logic such as those below; Which can easily drive the 3V Relay with a reverse flyback small diode to Vdd. 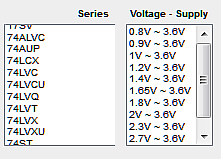 Although not widely documented , CMOS is made from FETs with RdsOn that depends on Vdd max to prevent excessive cross-conduction current during switching. It also increases max transition frequency due to fix load C and T=RC rise times. It also reduces static power dissipation with \$P_D=I^2R_{dsOn}\$ as higher current drivers. Normally the current limits are given to allow noise-free safe voltage margins for CMOS input threshold variations.

All 5.5V Logic families are designed around 50 to 66Ω nominal for Zol= Vol/Iol while Zoh is often the same but may be higher in some families and both have a worst case tolerance of 50% over temp.

Of course as in all CMOS & FETs when operated at lower voltage RdsOn will rise.

All 3.6 V Logic Families are designed around 22 to 33Ω nominal for Zol and Zoh may be the same or slightly higher for natural characteristics of same size PFETs.

Raspberry Pi's specs are below as you see are also consistent. 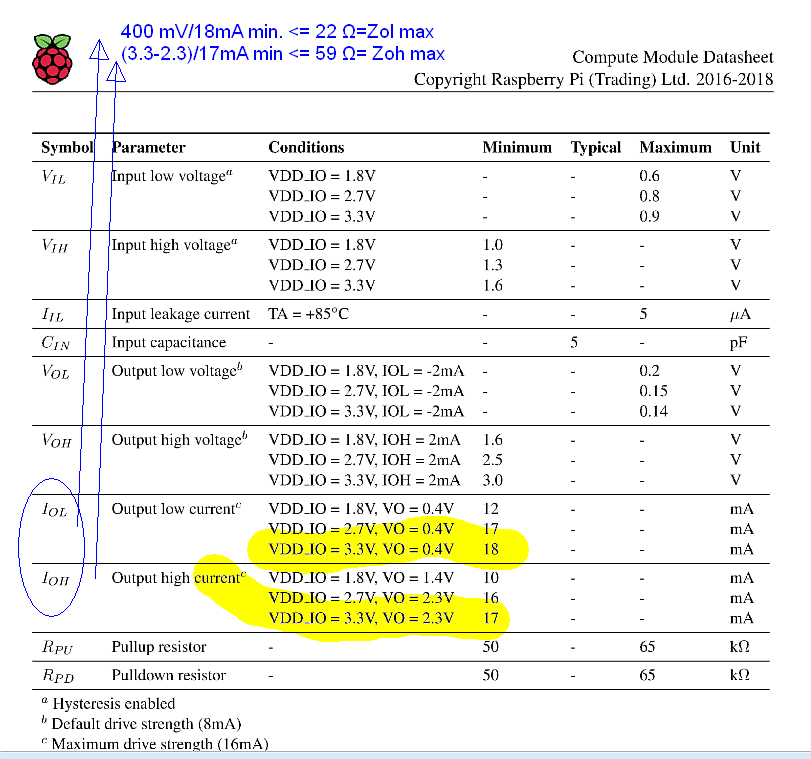 Not the answer you're looking for? Browse other questions tagged relay gpio or ask your own question.

0
General Questions about PIC24 MCU Input and Output Pin Impedance, Voltage, and Current
0
Raspberry pi with direct relay
0
Wire microswitch so state can be read from Raspberry gpio
0
How to drive a relay from ESP8266 gpio
1
How can i drive this 5v Relay board with RPi?
1
Raspberry Pi GPIO Output On Startup Safety
3
Raspberry Pi, too much load on GPIO