How does an SR Latch get started [duplicate]

Ask Question
Asked 1 month ago
Active 1 month ago
Viewed 2k times
14
\$\begingroup\$
This question already has answers here:
What is the beginning state for Q in a SR latch? (4 answers)
Closed last month.

Noob question, but I'm not seeing how an SR latch such as the one in the image can "get started". If each input depends on the output from the other, how can there be two inputs to each gate to set the thing in motion?

In a rudimentary circuit consisting of exactly one NOR-based SR latch, what happens when the power is switched on (e.g. battery connected)? 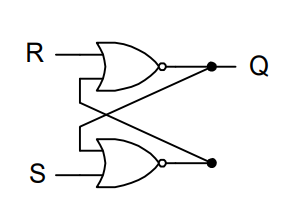 It is true that the latch will "wake up" in an unknown state. In the real world, given a little time, the latch will have a valid state with either Q=0 or Q=1.

You make the latch "get started" by setting one of the inputs (R or S) to be a 1 while the other input is a 0. This will force the latch into a known state, regardless of whatever the previous state of the latch might be.

In other words, if you want to know the state of the latch then you must explicitly Set or Reset the latch.

share|improve this answer
answered Jan 1 at 14:33

When you power on a bi-stable element like a NOR SR latch (with inputs at 0) it will start at to some state. That is not necessaraiy a 'binary' state, the the outputs can for instance be halfway between 0 and 1.

Most bi-stable elements are designed with a positive feedback factor, which means that any difference between the two outoputs (or, same thing but different viewpoint: any difference between an output value and the 'halfway' point) is amplified, so the element quickly 'drifts' towards one of the two stable binary states.

This 'drifting' time can be observable, and can in some circumstances involve osscilation.

share|improve this answer
answered Jan 1 at 13:09

This is a way of power-on-resetting a RS latch to a known state. Problem with it, the speed of the latch is slowed down and so can only be used for low frequency applications. 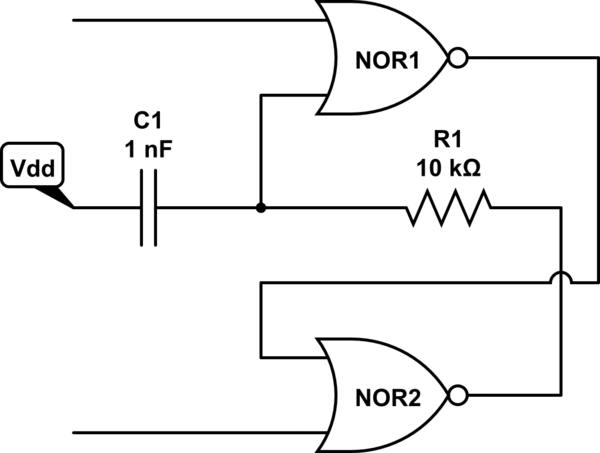 share|improve this answer
answered Jan 2 at 10:28

what happens when the power is switched on (e.g. battery connected)?

If there was no noise and the design was perfectly symmetric then by symmetry the output would sit at the equilibrium point. In the real world there is always assymetry and noise, which will push the output away from equilibrium and then positive feedback will take over and push the circuit to a saturated state. Which of the two states it ends up saturated in is unpredictable and may also be inconsistent.

How long this will take depends heavily on the particular logic family, with most oldschool logic it will be very quick, however some low voltage families may have an effective dead-band in the amplification resulting in much longer settling times.

share|improve this answer
answered Jan 2 at 12:04

When the circuit is powered on, its state is not defined. Because of natural variations in physical hardware, the latch will eventually settle into either valid binary state; however, in a simulator, which assumes ideal (perfect) hardware, the latch will be bouncing back and forth or otherwise be in an invalid intermediate state (e.g. Q and Q' are both on or both off; Q' is omitted in your schematic). Even with a real circuit, some oscillation may be visible on an oscilloscope when power is initially applied to the latch, and it may take an unknown amount of time for the circuit to settle into a stable state. This is called metastability. As a result, you cannot rely on the latch being in any particular state until you explicitly set or reset it.

Transistors of the latch are not ideal. On start of the latch one shoulder will 'prevail' and the latch will switch into one of the two states.

As such situation has no predictable outcome on start, it is better to forcefully put the latch into known state.

share|improve this answer
answered Jan 2 at 10:15

Not the answer you're looking for? Browse other questions tagged basic latch or ask your own question.

1
Given a gated SR latch, How do I make it a set dominant gated SR latch?
3
SR Latch Understanding
4
A question about how RS latches work and the time an input needs to stay high after it has been supplied!
2
How does logisim differ from redstone and real life circuitry?
0
Flip-Flop Made with 74xx Chips not Latching Consistently
0
Difference between low signal and no signal for a SR latch?
0
How does this RS-latch with open switches power the lightbulb?
1
Would this circuit work like an SR latch? Why is it better to use two NOR gates?