This is really just a "sanity check" type question. Am I correct that if you place two batteries in series, that the battery life is effectively halved relative to just one battery, assuming the load is the same?

Suppose that we have two batteries, which are idealized in the sense that they are both at exactly Vcc voltage while the battery is alive, and then drop immediately to 0V when it isn't (rather than a gradual taper as seen in real-life batteries).

As an example, and just to keep the units simple, suppose the battery is at 1V and has a total stored charge of 1 coulomb (or 1 amp-second), corresponding to a total stored energy of 1 joule. Then if we place the leads on a 1 ohm load, we get the following voltage curve: 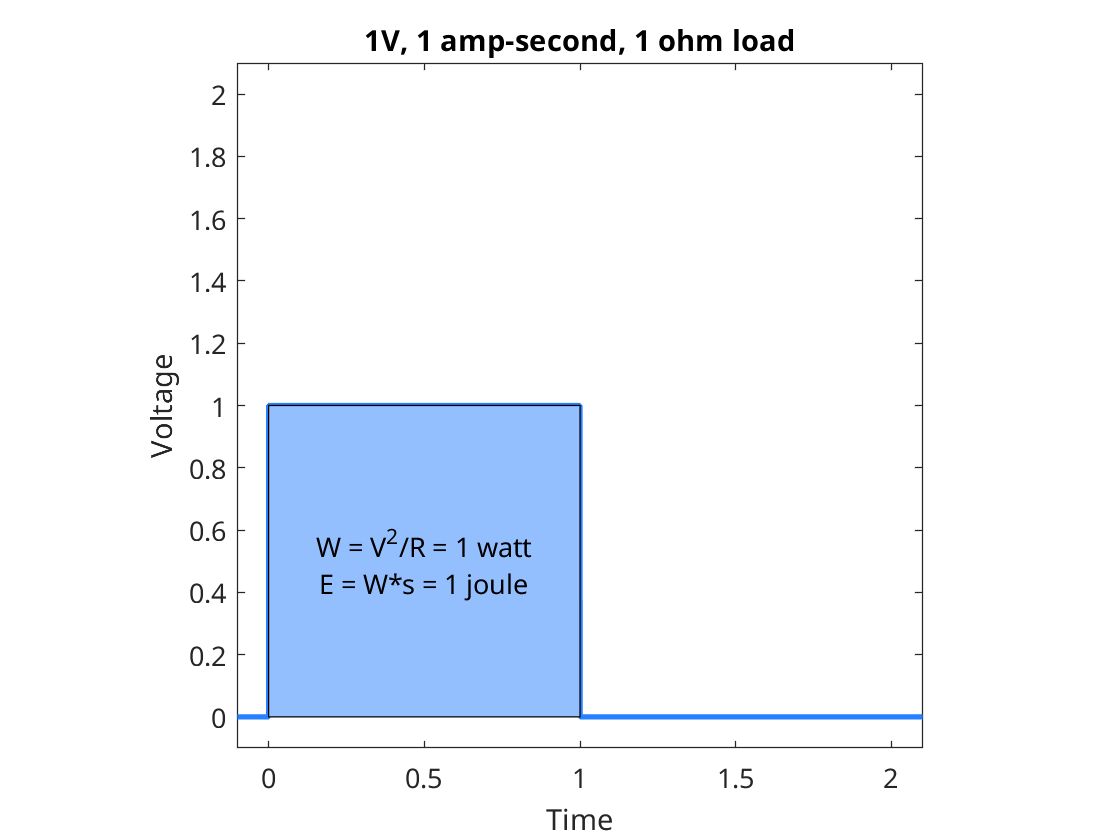 You can see that the battery provides 1 watt for 1 second, for a total of 1 joule of energy, and then immediately dies.

Now suppose we have two of these batteries in parallel, and again a 1 ohm load. Then the voltage would be the same, but the time duration is doubled: 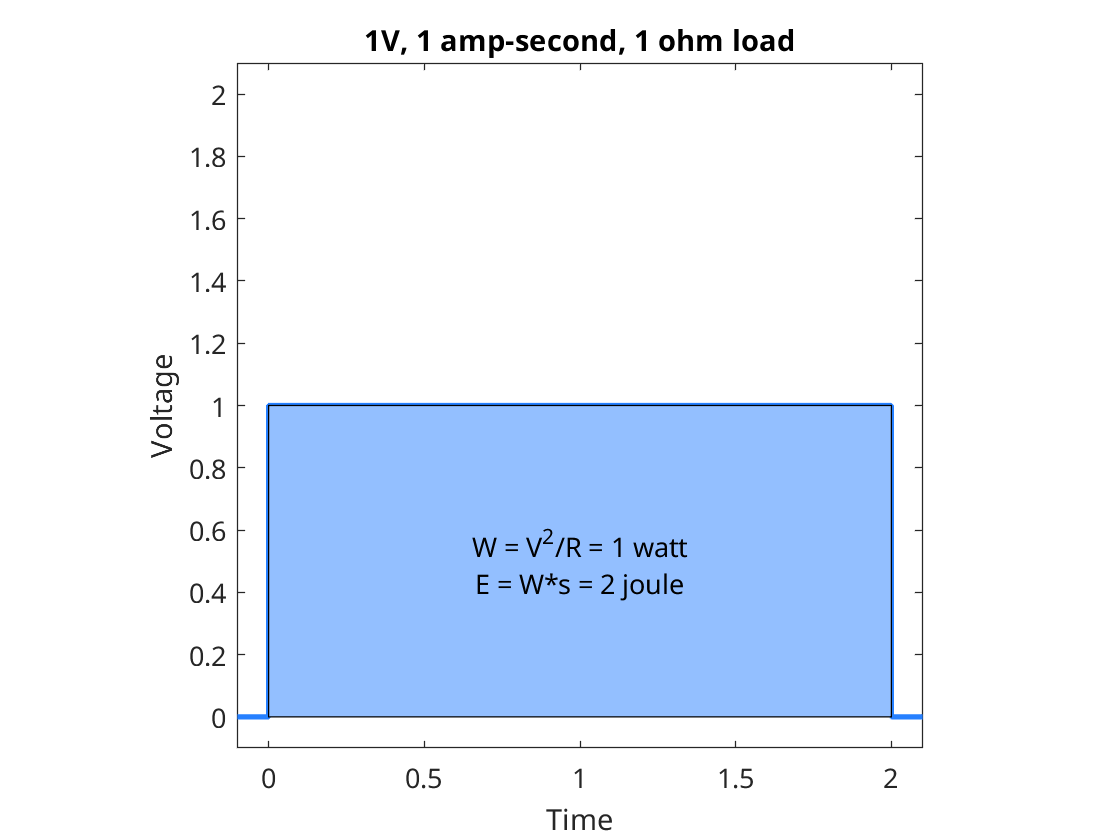 So you can see we now have 1 watt for 2 seconds, and a total of 2 joules of energy (which is the correct amount for both batteries combined).

Now, suppose we have the two batteries in series, again with a 1 ohm load. Naively, if you just keep the time duration at 1 second, and double the voltage, you get the following graph: 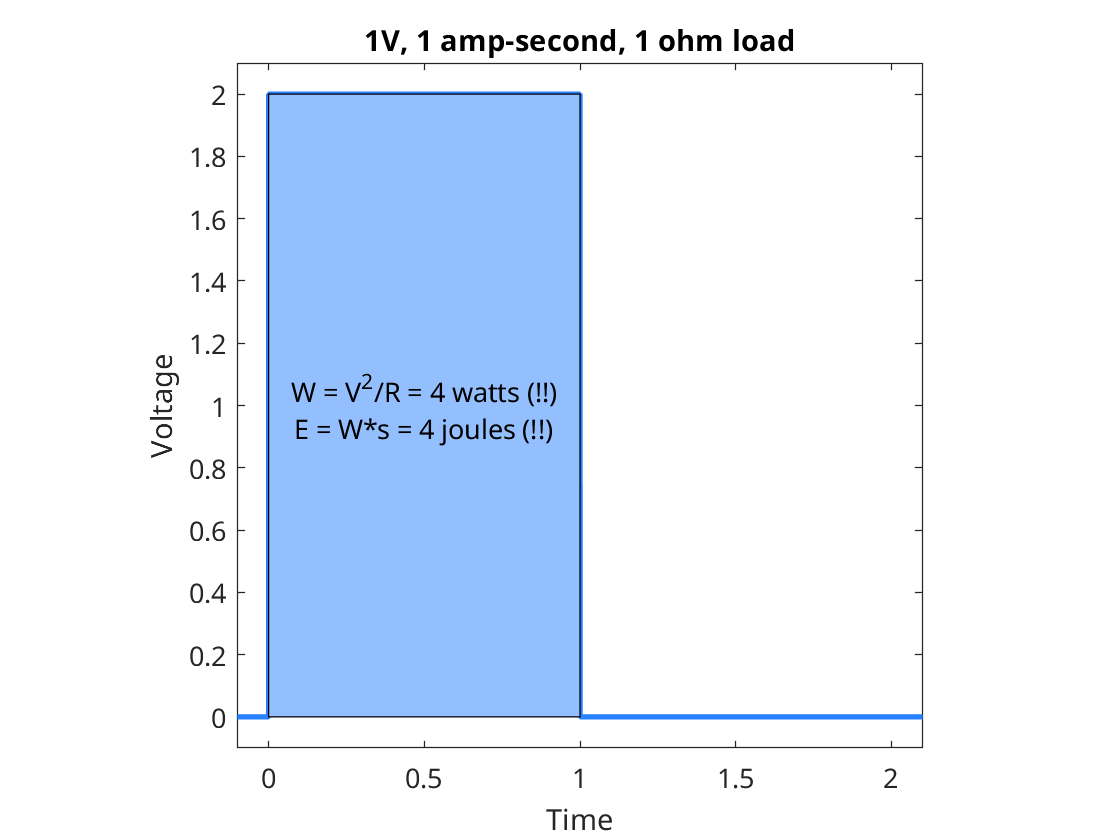 You can see we have 2 volts for 1 second, which is 4 watts of power, and for one second is 4 joules of energy. This is more than the combined rating for both batteries, though, which was 2 joules.

As we can see, the batteries won't be able to last that long. Assuming there is no more than 2 joules total to deliver, the correct curve would look like this: 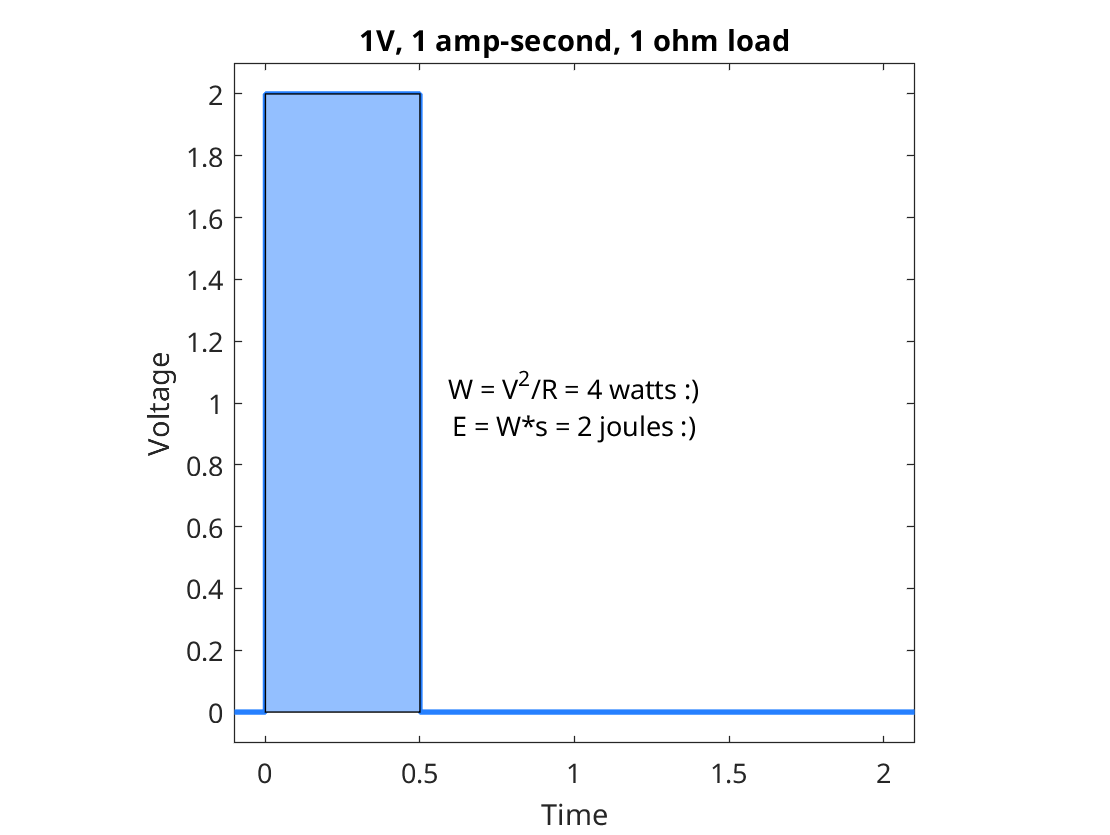 So you can see that if the batteries are only to be able to give 2 joules total, the battery life must now be half (!!) of the original.

Another way to think of this is that, when stacking batteries in series, the total stored charge (i.e. in amp-hours, mAh, coulombs, etc) is kept the same. If the load is also kept the same, then the current is now doubled, so the batteries both drain twice as fast.

Another way to think of it: if you put two batteries in series, the total stored energy doubles, along with the voltage. But, if the load is kept the same, then the current also doubles, so the power draw is now 4x what it would have been, and the batteries drain twice as fast. Put another way, the power draw scales with the square of the voltage, assuming the resistance is kept the same.

You should get the same results for "non-ideal" batteries with some arbitrary voltage curve V(t) as it is hooked up to some load. With two batteries in parallel, you get that the voltage curve is simply stretched by a factor of 2 along the x-axis (i.e. V(t/2)) and decays twice as slowly. The integral of the square of this function (representing the transmitted energy with a 1-ohm load) is doubled relative to the original, as it should be. With two batteries in series, just doubling the voltage at each time doesn't give the right answer -- that would be 2V(t), but now the integral of the square has quadrupled. Instead, it's 2V(2t) that gives the same area, so that the voltage curve is doubled, but also decays twice as fast.

So my question: is this right? If you place two batteries in series but keep the load the same, the battery life is halved? This should be a basic principle but I never see it stated this way, so I am wondering if I have missed something.

If you place two batteries in series but keep the load the same, the battery life is halved?

Battery life implies the number of battery cycles before the battery is no longer useful. "Run-time" would be a better description. Yes, the run-time would be halved. In practice it would be even worse because battery capacity decreases at higher discharge rates.

This should be a basic principle but I never see it stated this way, so I am wondering if I have missed something.

You have missed nothing other than your scenario would be unusual. There aren't many loads that can function properly over a 2:1 voltage range. Most products would be designed to work at one or the other. Exceptions include DC/DC converters but these will provide constant power to the loads so that as voltage increases the current drawn is reduced.

Not the answer you're looking for? Browse other questions tagged power batteries series basic capacity or ask your own question.

20
Adding mAh when wiring battery cells in series?
2
Extending battery life: Calculating advantage of adding more batteries
10
Watts - I think I'm getting free energy from a circuit?
1
Two batteries in parallel: why they deliver "twice the current for the same time"?
0
Can batteries in series be reverse charged if the circuit is open?
0
What happens to the backup time when batteries are connected in series?
3
When you connect two batteries in series, why doesn't the middle short?
1
How are series connected batteries of different voltages (or even same voltages) charged "equally"?
0
Solar MPPT, 24v deep-cycle battery wiring (Parallel and Series combined)