Is it logically explainable that current is lower when torque higher?

I am modelling a motor with a little simulation script. The principle is:

But with my simulation, I am getting a lower current when the traction force is higher. I think that speaking of energy, it does not make sense.

I don't know yet how to calculate the Voltage needed with the current, so maybe it could explain something?

Thanks in advance for insights

EDIT: I replace "solenoid" by "coil" Thank you for the answer in comment, but then I have another question to solve my problem:

Some elementaries should be kept clear if one tinkers with electromechanics. One of them is how the simplest possible fixed magnetization DC motor behaves. If we assume the DC motor doesn't suffer poor commutation nor magnetic non-idealities like iron saturation, but accept there's some resistance in windings and brushes, the motor has very simple math model. It is even more simple if we use SI units. That means for ex. we measure rotation speed as angular velocity in radians per second and rotation torque is in Newtonmeters instead of obscurities like ounzeinches. The model is in the scanned paper: 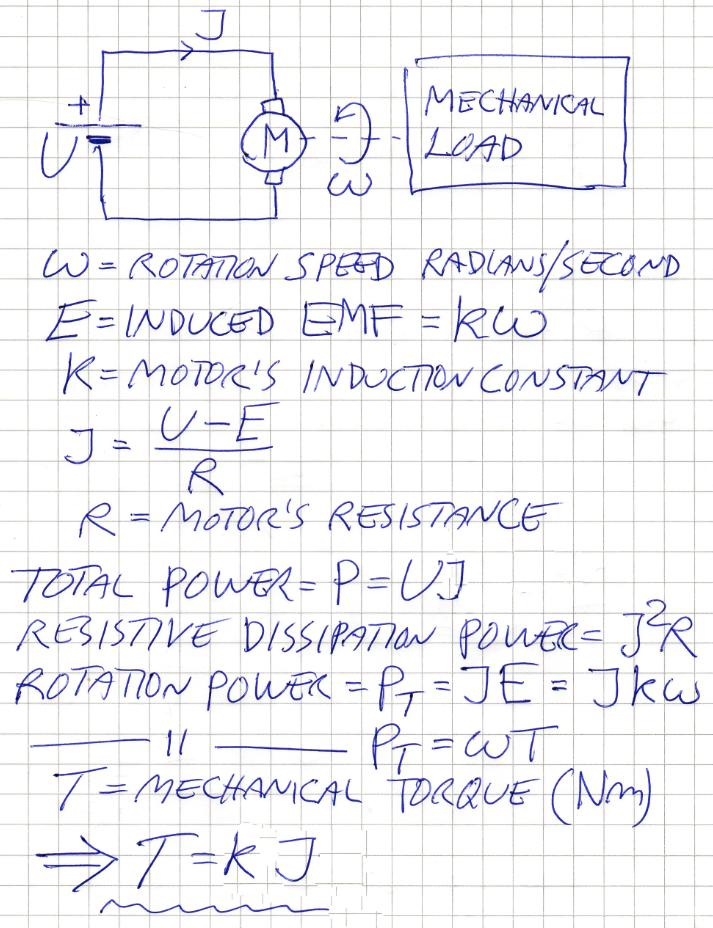 Motor accelerates after it's connected to a DC source (U) (assuming there's enough torque to win the friction). The induced voltage E increases, so the current (I) decreases because there's less voltage over the internal resistance.

The total power taken from the source goes partially to dissipation in the resistance, but the rest is converted to mechanical energy. As electrical quantity that power must be =IE.

Electrical power converted to mechanical has several targets. The speed increase needs a part as kinetic energy of the rotating masses (=the motor itself + the load). After the initial acceleration has ceased the motor keeps up constant torque T which is the sum of friction in the motor and how much the load needs to keep rotating at the achieved rotation speed.

With formula T=kI we can for ex. calculate what is the rotation speed with given k, U,R and torque.

Your simulation showed that the current decreased when the torque increased. Your simulation either is wrong or the motor is substantially more complex than the elementary fixed magnetization DC motor.

One part of the mechanical torque can grow at the same time when the motor current decreases in a simulation run. That's the torque which is needed to win the friction. It generally grows as the speed increases. When the acceleration decreases gradually, less torque is needed to accelerate rotating masses, so the total torque decreases but what's transferred out of the motor by the axle can still grow. That's the case when the inertial mass (more exactly "the moment of the inertia") is mostly inside the motor and the friction is mostly in the load.

Not the answer you're looking for? Browse other questions tagged power-electronics electromagnetism physics or ask your own question.

40
How are current and voltage related to torque and speed of a brushless motor?

6
Putting far more mechanical energy into a generator than its electrical load
0
Stepper motor failing. Electrical interference?
3
Higher KV means lower torque for DC motors?
3
What is the mechanism that causes two conductors to "stick together" when a current is passed?
0
Field Flux control and Speed Of DC motor
1
Speed and efficiency of solenoid train?
1
How is torque proportional to current and magnetic flux in a DC motor?
0
Can someone verify my understanding of induction motors?