Due to overcurrent, shouldn't I be extremely cautious when setting an I/O pin as Output?

The question can be applied to any microcontroller with I/O capabilities, but I’m currently working with the popular ATmega328p. Consider the following circuit: A simple SPST Normally Open switch with a 10k pull-up resistor and a ceramic capacitor attached, connected to any I/O port. The specific pin should be obviously configurated as INPUT in the respective DDRx. The datasheet describes, inside the DC Characteristics section, an Input leakage Current I/O pin \$ (I_{IL}/I_{IH})\$ of 1µA, while far in the horizon the DC current per I/O pin caps at 40.0mA. Not a problem at all. 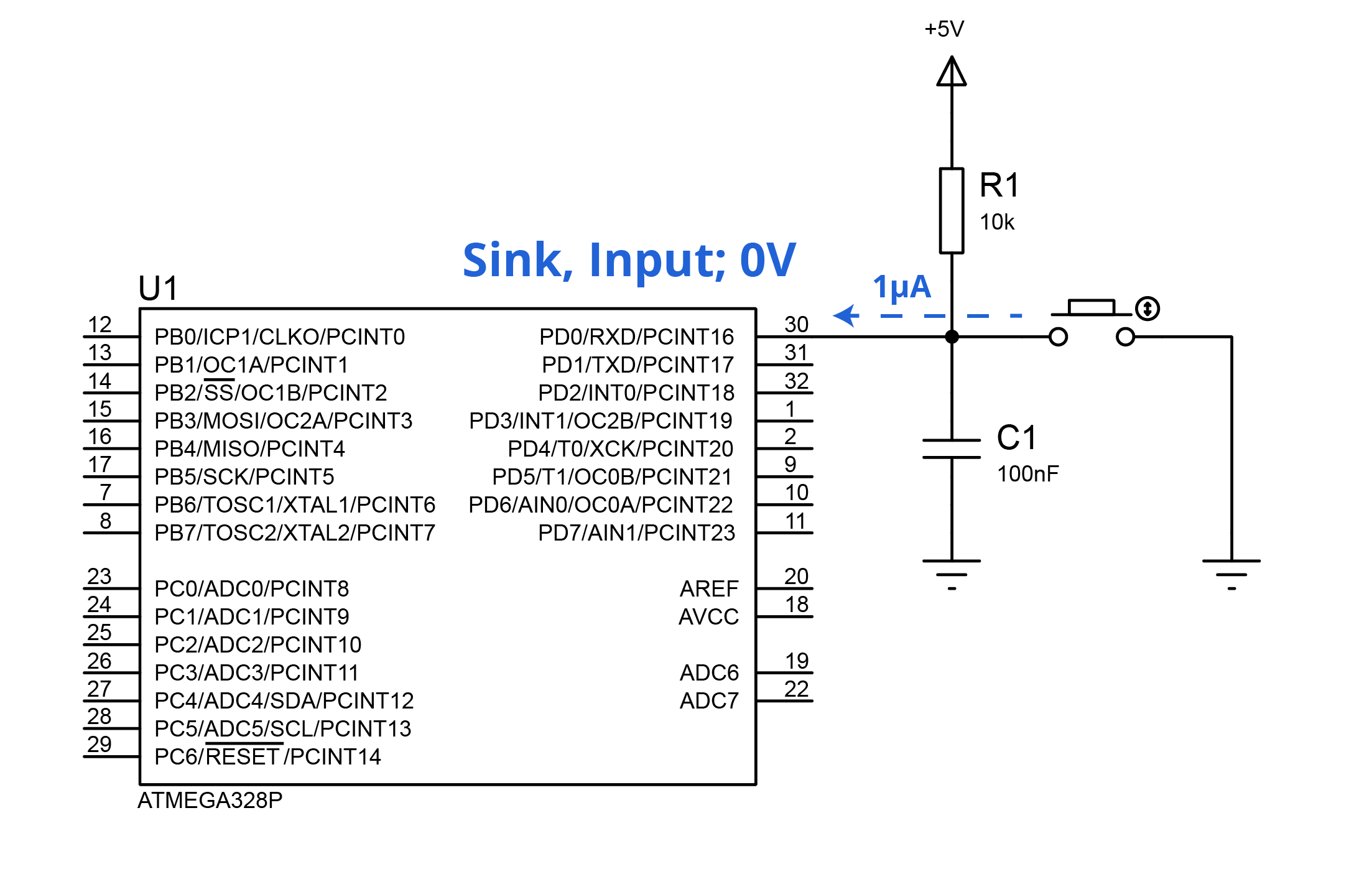 Now consider that I forgot the fact that the given pin has to be set as Input, I set it as Output and set the Port HIGH.

While the datasheet doesn’t provide an Output Impedance it can be estimated to be 25Ω, based on the given graphs. Now at the time the button is pushed the current finds its way through the microcontroller from the 5V source with a 25Ω resistor plus negligible resistance due to the copper trace. This theoretically produces an overcurrent of 160mA above the DC current per I/O pin ceiling. Could this fry the port and the device? 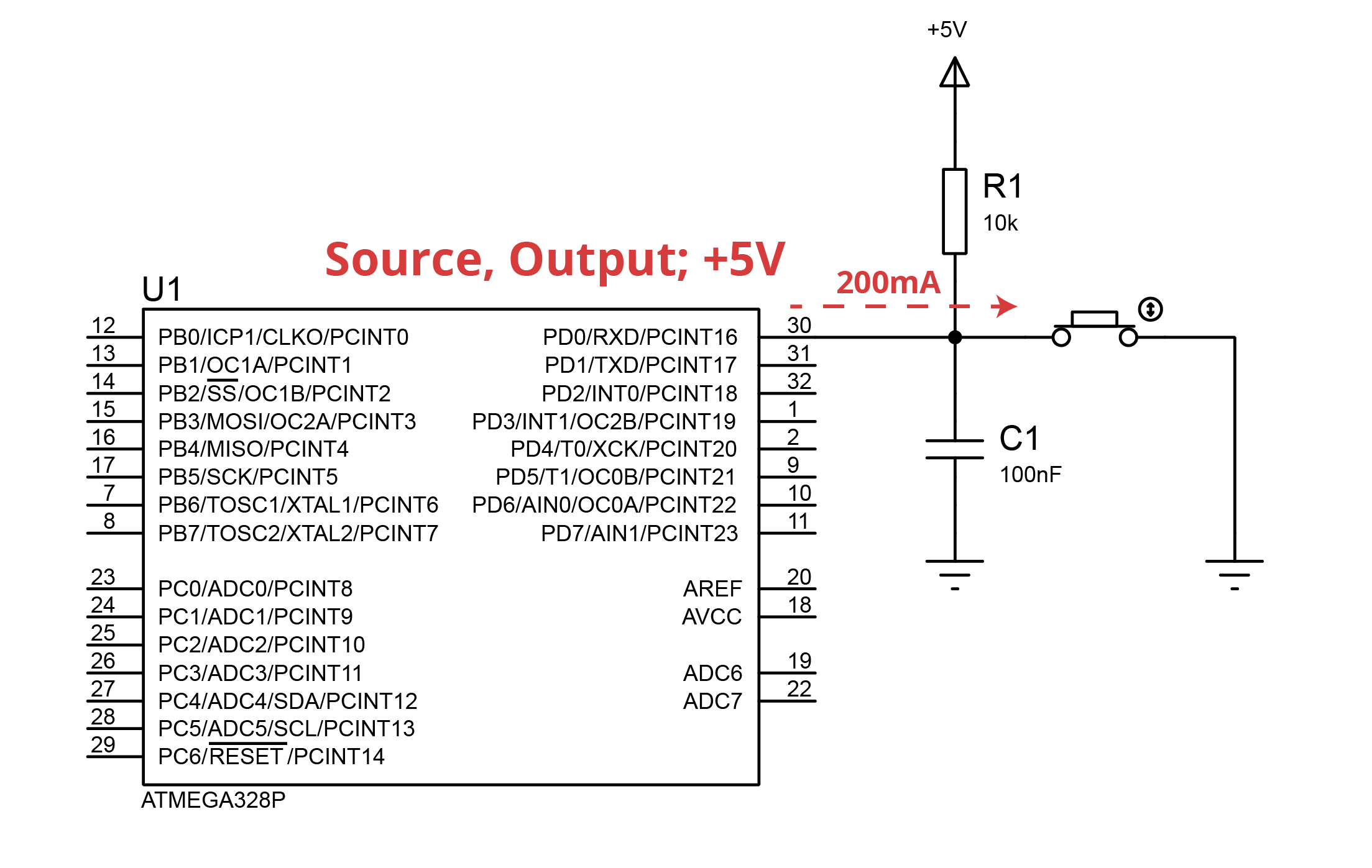 Analogously, if I switch over to positive logic and set the port to LOW the same problem could be encountered: 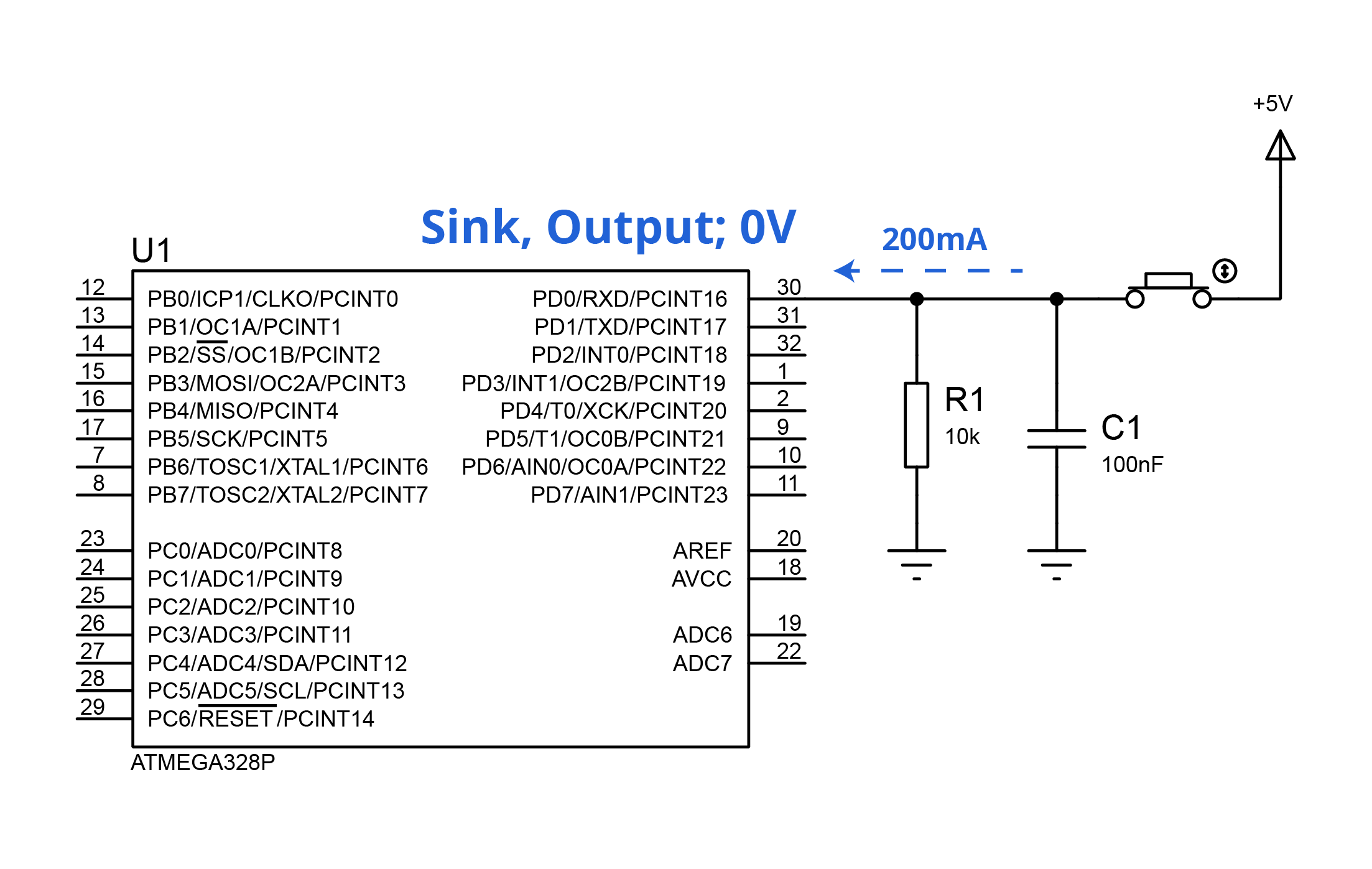 Considering this type of circuit is avidly encouraged, how it doesn't seem to bring any troubles? Now, back to the original question, shouldn’t I be extremely cautious when setting an I/O pin as Output? Or at least attach a small series resistor as a primitive protection?

Note: Not a native English speaker, feel free to edit the post if you see something awkward.

As others have said, you shouldn't have a problem as long as you double check your code.

If you do get it wrong, by and large the ATMega IO pins will limit themselves to about ~80mA due to internal resistance of the MOSFETs (value found by experiment). This is not good for the chip, but as long as you don't leave it in this condition for an extended period, they tend to recover ok.

If you are worried, it can be a good idea to put a resistor in series with the inputs. Something in the order of 330R for a 5V VDD, or 220R for 3.3V VDD. This will ensure the short circuit current is limited to ~15mA which is comfortably within spec.

The resistor goes between the IO pin and whatever is driving it (e.g. button w/ pull-up, or CMOS). As the ATMega has a pretty limited useful frequency range (IO freq < 10MHz), the extra resistor won't have any noticable impact on operation of the circuit as the inputs have very little in the way of leakage current and capacitance

You should be cautious but not terrified about it. Setting a pin output and driving it to the other direction will cause a lot of current to flow, but it also does not blow up in smoke immediately. You could for example power the device with current limited labotatory supply when bringing up a design so these kind of errors cause even less damage. I'd be more worried about the pushbutton and capacitor getting damage over continuous use as pushing the button effectively shorts out the capacitor and a spike of current is limited only by cap ESR, PCB wiring and button resistance, so it can exceed many amps. And as there will be contact bounce at the pushbutton, the current has high frequency components and that combined with stray inductance of long wires will convert the current spikes into voltage spikes, protected only by IO pin protection diodes. So in general, a resistor of even 330 ohms in series starts to be a pretty good idea to limit current through pushbutton.

Considering this type of circuit is avidly encouraged, how it doesn't seem to bring any troubles?

Because when engineers set up the I/O for their device, they are careful to ensure that they do not drive inputs as outputs. For most I/O, we will set pins as either inputs or outputs at startup and never change them later. This gives us only one line of code we need to double-check carefully, which is not an exceptionally hard task.

There is no need for a protective resistor unless you think it is likely that you will be careless about your coding. In that case, I strongly suggest you work on improving your coding practises, by doing better testing, or by reviewing your code before you run it.

Now, back to the original question, shouldn’t I be extremely cautious when setting an I/O pin as Output?

Yes you should. But then I should hope you are equally cautious about all the many other ways you could cause damage to your circuit, like shorting out pins, turning on both sides of an H-bridge, or other similar mistakes.

Can confirm, on an arduino uno, 328p chip, if you connect a driven output to ground or VDD, it will kill that pin. I have accidentally done it several times in my early days with electronics.

On other chips I work with, I'm pretty careful not to do this but more modern ones do seem less susceptible to this failure mode. For example, I accidentally set up a timer on an stm32 in pwm out mode and had it fighting an opto coupler for about 15 minutes... The opto comprehensively won the tug of war... But the STM chip survived.

The situation with the arduino 328 chips is sufficiently bad that people have made "ruggeduinos" with all kinds of protections to avoid common causes of death.

Edit: Adding a resistor, around 100 ohms in series with the pin, is in my experience enough to avoid the pin damage.

Generally, shorting a logic output to ground doesn't immediately kill a chip. It may not be good for it, but it's not so bad that mistakenly setting inputs to outputs cause things to burn up.

So -- go ahead and use the recommended circuits, and double-check your software. If you have willing friends or colleagues, do code reviews.

You need to check "Absolute Maximum Ratings" in the datasheet like this one http://ww1.microchip.com/downloads/en/DeviceDoc/ATmega48A-PA-88A-PA-168A-PA-328-P-DS-DS40002061A.pdf, which declares that

Which means that if you don't comply with the above, the reliability of the part won't be assured. But not realiable doesn't mean fail now or even fail someday later, this is all about the chance to fail.

For dev board in the lab, if it is expensive or not easy to get another one, then more care is needed. You can use a special funcion to access the register which make it the single point of care unless memory is corrupted by other code. But in most case it is not that expensive or time consuming to get another one then this is not a big problem.

BTW ESD may have a larger chance to destroy your dev board.

Not the answer you're looking for? Browse other questions tagged microcontroller avr circuit-protection atmega328p or ask your own question.

4
Half voltage on output pin under load?
0
General Questions about PIC24 MCU Input and Output Pin Impedance, Voltage, and Current
2
How do I safely connect a 74HC00 series circuit to microcontroller?
2
AVR IO Alternative Functions Priority
0
1V output only when load is applied?
2
What is the purpose of a pull-up resistor in a microcontroller?
0
AVR-ATmega256 What is the use of PORTxn?
0
Microcontroller output pin to pull 12 volt signal low
4
Microcontroller output override another signal, protect uC when powered off
1
STM32L1 GPIO pin configuration - Power supply current increase due to pin with open-drain setup