How do computers power so many lights on a keyboard?

Beginner here. I am working on building my own keyboard PCB, and I wanted to add a backlight for my keys. However, I've been reading methods of powering teensy little 3mm LEDs and it seems like an impossible task to get 77 powered by anything less than a billion volt power supply with them in series or somehow get a billion amps pumped out to run them in parallel. (I know I'm exaggerating, but still...)

How do everyday computers power so many little key backlights without running out of battery immediately?

The only way I could think of getting this to work would be to have a separate power supply of a million AA batteries taped to the bottom of the keyboard separately powering just the LEDs.

Is there a better solution out there?

If keyboard components aren't rated for LED light through them, don't buy them. They are likely to be opaque, which means you could put a searchlight down there and not get any light through. Anyway you would be unable to power it off USB, and you'll need to get under 2.5W for that, and will want to get under 500mw if possible.

Let's take this Cree C512A-WNS/WNN LED. It's rated up to 25ma but the specs assume 20ma test current. Forward voltage is 3.2-4.0 depending on how hard you want to overdrive it.

After the initial specs, the next thing you see on the data sheet is about binning. When they manufacture these, they get variances. They sort these into "bins" by luminous intensity at current, operating voltage, color temperature (that's the CIE chromaticity chart), etc. You select the bin code that you want for your lights, and the pricing is decided by supply/demand, e.g. how well that bin is produced vs selling.

Then you get into the performance charts. Now, if these were illumination LEDs, Cree would produce full-page charts with more detail. But this is sold as an indicator LED, so they sorta hustle by these points. 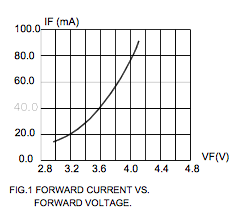 Note that this curve is actually much, much steeper than it appears. The current scale starts at 0 but the voltage scale starts at 2.8. This makes it difficult to drive it at constant-voltage mode, e.g. you have to hit 3.0V pretty precisely if you want 15ma.

Further, this chart varies by temperature, which is not shown. As the LED warms, current increases for a particular voltage, and it increases fast, because this is a very steep curve. If you drove it with 3.00V, it would draw 15ma until it warms, then 20ma, which would hasten warming, 25ma, warming faster still, 35ma, 50ma, 100ma, pop.

The preferred way to drive LEDs is constant-current mode. Then, behavior will be fairly consistent. Drive voltage will drop slightly because now you're looking at the curve sideways: the curve is pretty flat from this view. 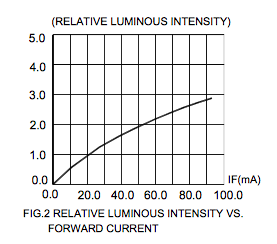 The lower scale is the milliamps of current. The side scale is the luminous intensity, and it's expressed as a factor of the spec (back on page 2-3). 1.0 is exact spec. 2.0 is double the spec.

Blinded by the light!

However, 198mw x 77 keys means 15.3 watts of searing LED light. Assuming typical poor 85 lm/w from a Cree LED overdriven that hard, that's 1300 lumens - the brightness of a fluorescent tube. That's orders of magnitude more than you want in a keyboard.

The efficiency curve continues to be curved, and so at 10% of power, I would expect ~15% of light. That's 90 lumens of light. Even that, you will want a "dim" option on.

The best way to dim LEDs is reduce their current in the driver. The second-best way is PWM.

You'd want to drive these actively "constant current" (though you might vary current to select brightness, the point is, the driver would seek to a target current, not a target voltage.

Series is simplest, but then, you have a keyboard that can kill you. (6.4ma would definitely get your attention; whether this is dangerous is a health-and-safety question, but US style GFCI protection devices trip on 5ma, so I would say it's of concern.)

So I recommend something in the middle. Have multiple series strings wired in parallel. Since your 77 number is the factor of two prime numbers, 7 and 11, either make them strings of 7 (@22.4V), or strings of 11 (at 35.2V). The LEDs will vary somewhat, so to even out these, I'd add one dropping resistor on each string. The linear resistor plus the very non-linear LEDs will dampen out these differences.

Drive that with a boosting constant-current supply, at 7x or 11x target current (adjusted for brightness if you do that).

LEDs do have a maximum current rating, but it does not mean they must be run at full power all the time. For this application at least two things can be used. Buy better, more efficient LEDs so that they light up brightly enough at lower current, say 1 mA or less. You can also divide the LEDs into multiple groups and multiplex them so that only one group is on at one given time and other groups are off. Sequentially turning on one group at a time at high enough scan rate creates an illusion of all LEDs being lit.

Don't run them at their max current. That's not good for reliability anyway.

Run them at the minimum current needed for visibility under the conditions you want them visible.

For many of today's LEDs that could be somewhere in the range of 1-5 mA.

Typically these are not done in the typical series or parallel method that simple projects use. When you need a large number of leds and low power, you use one of two (or both) methods.

The first is multiplexing/charlieplexing/scanning. This is also used for addressable leds or displays, to display a picture/video/individual pixel, not just backlights, but the benefit is the same. A matrix setup allows less pins to control more leds, and less power as only a section/segment is turned on at a time. It takes advantage of human vision, ie persistence of vision.

The second is led drivers, which will boost the voltage or current as needed. There are dedicated ICs meant to power and drive led strings, making them more efficient than the typical direct power options. See https://www.digikey.com/en/articles/techzone/2012/nov/trends-in-led-backlighting-and-drivers-for-mobile-devices-and-tvs for some discussion of the various options.

Not the answer you're looking for? Browse other questions tagged led batteries circuit-design low-power or ask your own question.

0
Choosing leds for batteries power
2
connect LEDs to USB keyboard – but they turn off after a second
2
Will a USB port be able to power a series of LEDs?
5
12V LED strips in series with a 24V power supply?
3
How many ohms do you need before you need a resistor?
0
Design recommendations for an array of different forward voltage LEDs
0
LED circuit is draining AA batteries REALLY fast
1
LED Power vs current and voltage
0
Individual Led vs LED Strip
0
Most efficient way to drive an LED from 9v source?