I'm currently trying to learn how multi shifting is working and have therefore started a project where I wanna drive 2X 8x8 LED matrix with an Arduino. I have found it that I should work with the 74HC595 chip.

This is the schematic I'm using to try out how the chip works. 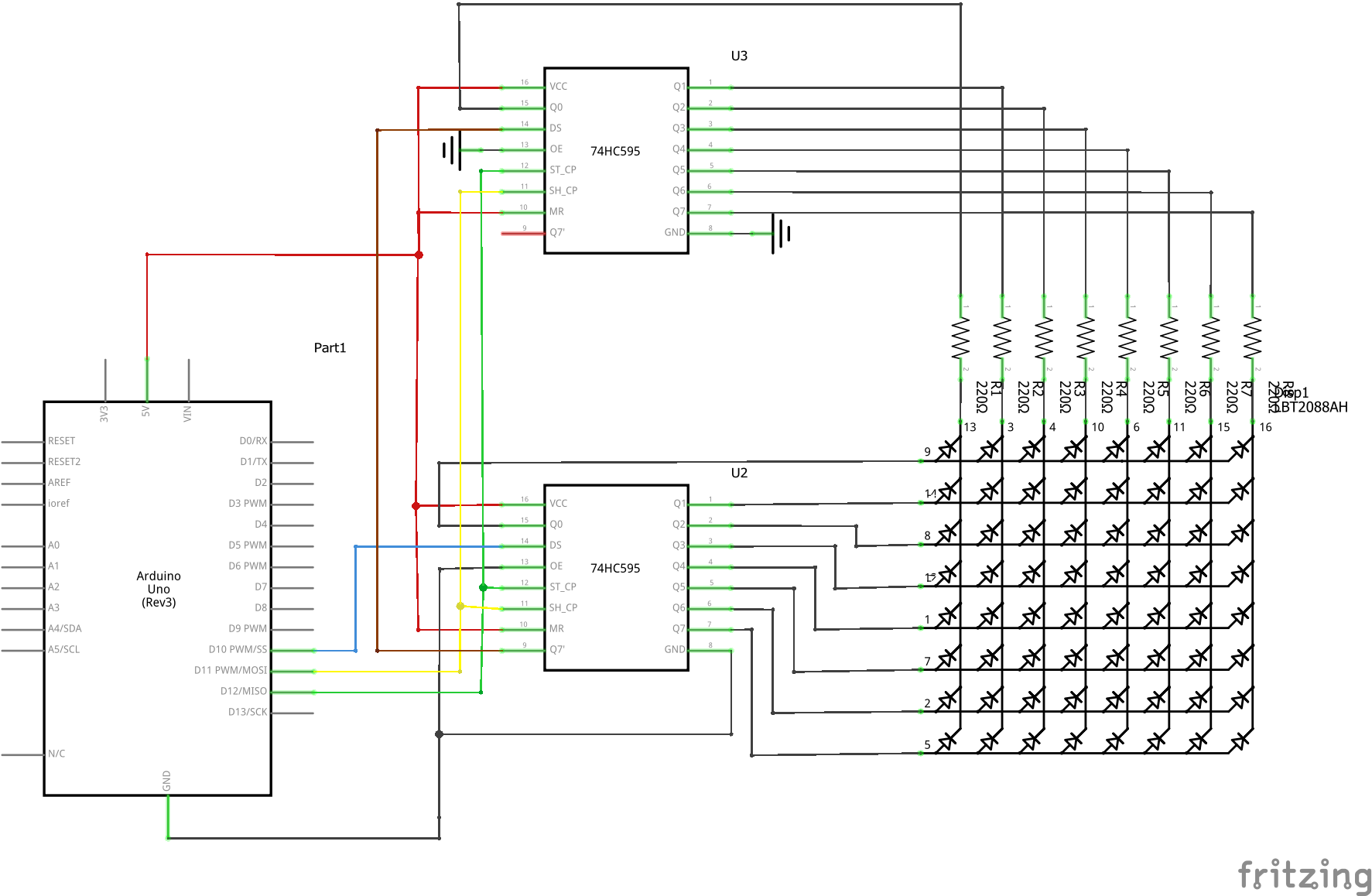 But when I use this with the following code, it doesn't light every LED up and some of them are less bright than the rest. 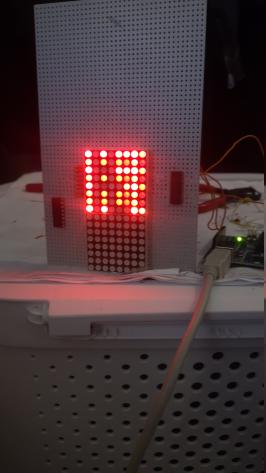 What can cause that? Do I have bad wiring? or bad code?

I have tested my LED matrix with the code from @vicatcu. First I found a lot of bad connections they are now fixed, I hope.. 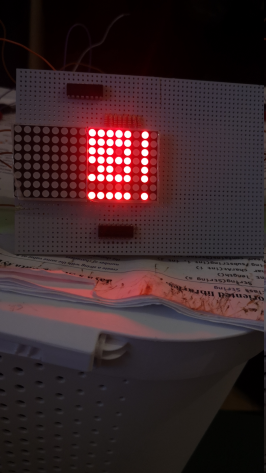 If I remove the "~" from the code then I get this: 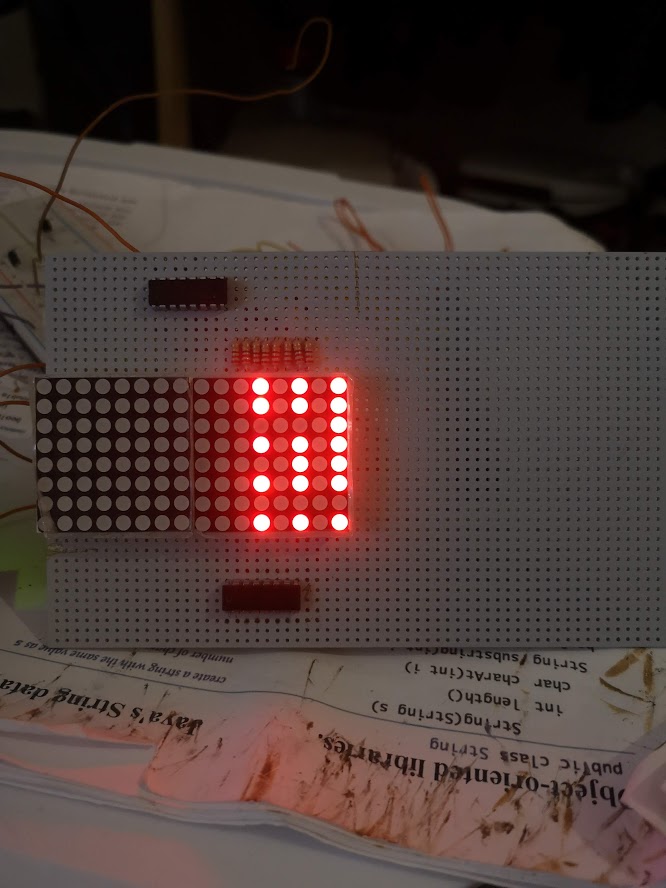 I tried @James idea and moved the resistors from the columns to the rows, but that didn't fixe the problem rather it just moved some of the on light pixels 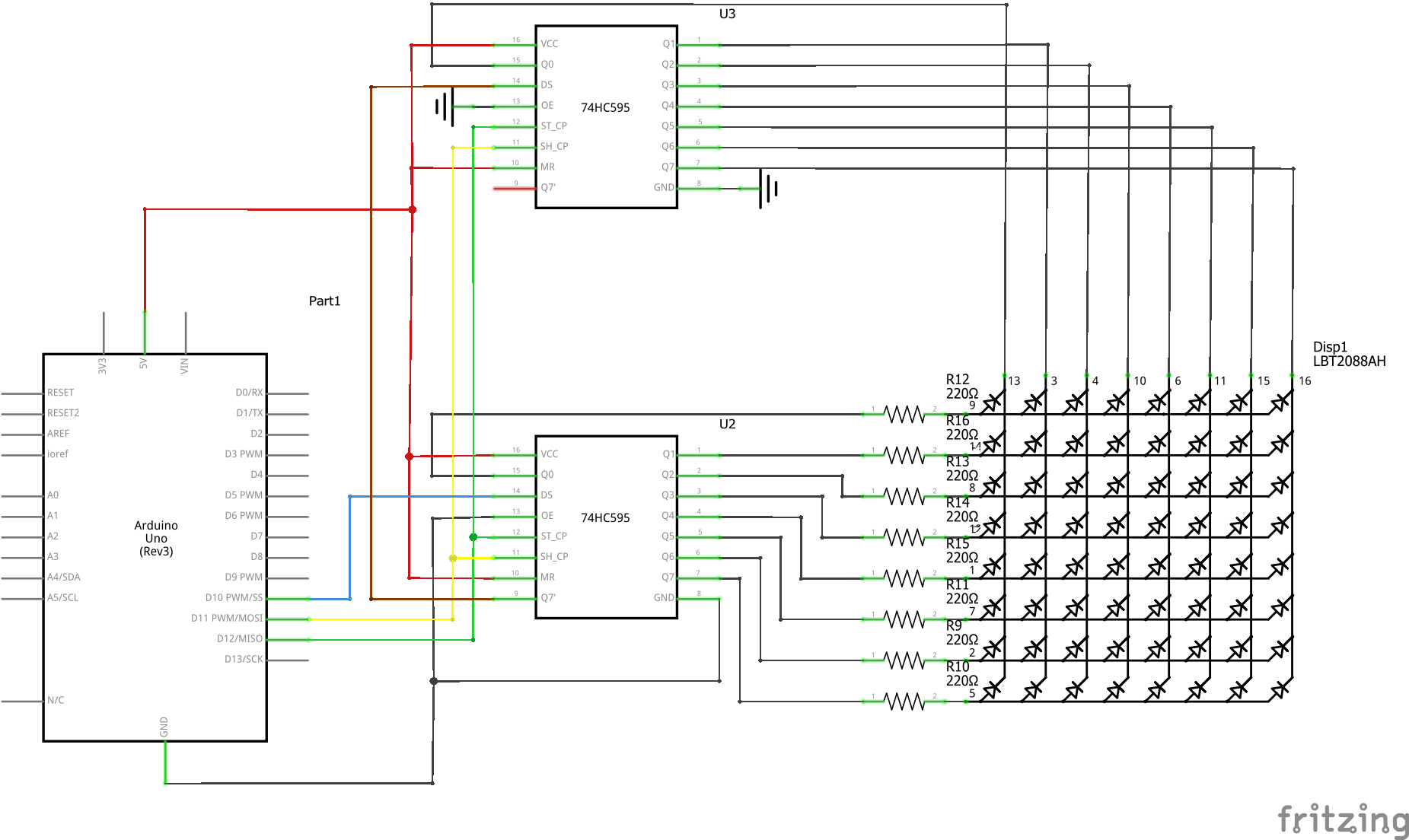 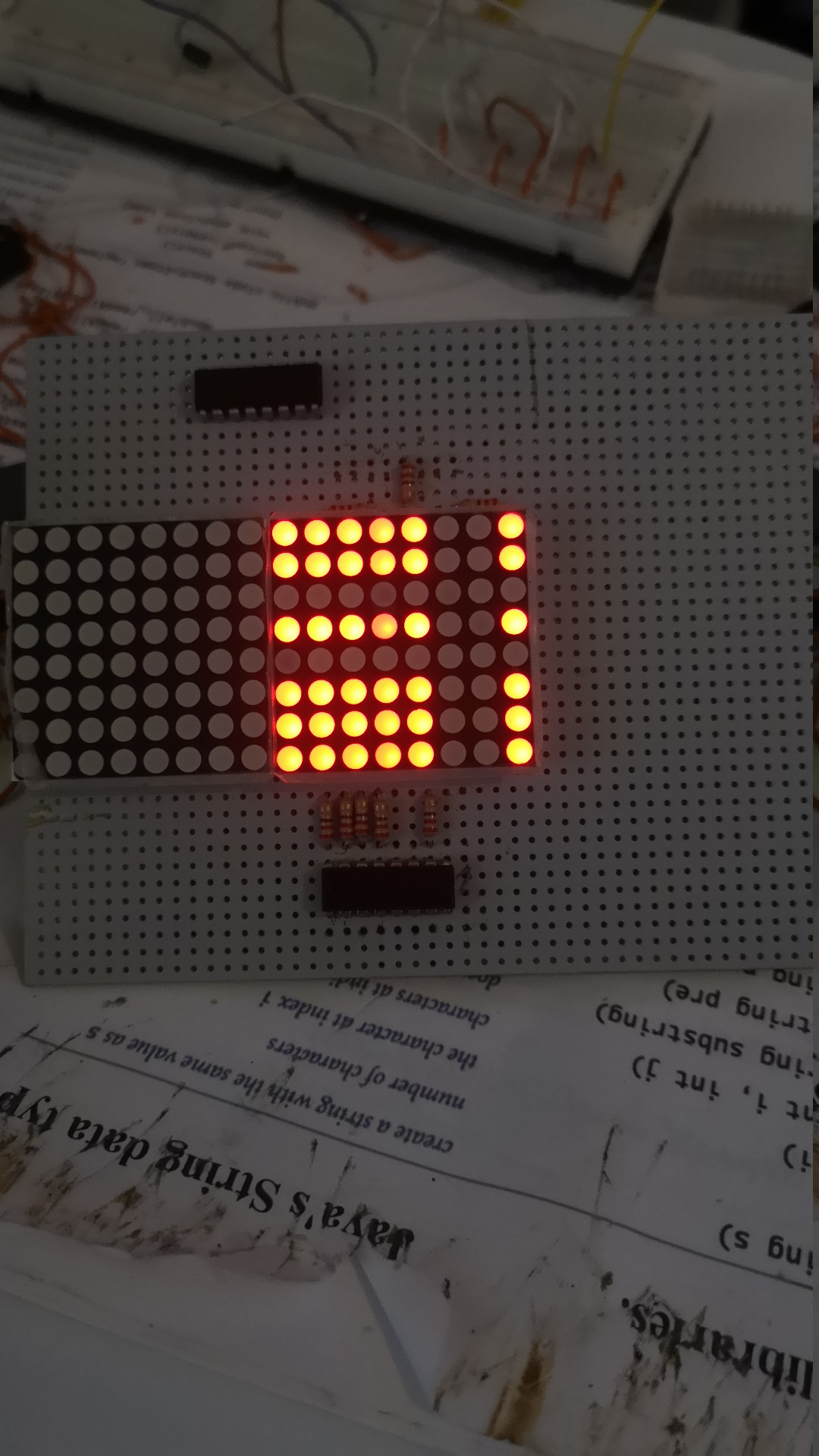 Lets analyze what's going on here. The code is implementing a multiplexing scheme, which is to say at any given moment, only one row of LEDs is being "addressed" (i.e. 128 >> i, the row addressed by the i-th bit). I'd advise you to rename the variable called SHIFT to CLOCK as that is what most people will expect it to be called. Usually the variable you call STORE is called LATCH. You should declare int pic[] as uint8_t pic[] instead so it's the right size (8-bits instead of 16-bits) for what you are trying to express as well.

All of that said, I don't think any of it explains the outcome in the picture. I think it's more likely a wiring error of some kind or an power issue. Can the 74HC595 source / sink 100mA? Because that is what you are asking of it with 8 LEDs, a 5V power source, and 220 Ohm resistor.

I would start with a much more simple sketch that allows you to stimulate each pixel of the matrix individually, and in a way that is under your control through the serial terminal, for example. Something like this:

And just see if you can get each LED to light up one at a time. Make sure you configure the Serial Monitor to have "no line ending" and for every character you send, the LED will advance by one position in row major order. At startup, no LEDs should be illuminated.

Let's analyze the problem which is all due to wrong drivers for proper impedance. (mis-wiring and failed IC wirebonds maybe from over heating)

The 74HCxx driver resistance is too high. For proof of concept increase all 220 Ohm resistors to say 0.5~1k Ohm and tolerate low illuminant intensity.

Let's consider worst case at 4.5V because Ron rises in CMOS as they get hot.

The ones with no light are defective wiring or IC's too hot.

They do make proper IC's for Matrix driving.

The 74HC595 powered at 4.5 volts when driving a load current of 6 mA will produce an output voltage of somewhat less than 4.5 volts; more like 4.3 volts (Table 7.5 in the electrical characteristics). This is a typical value and it may be as low as 3.98 volts.

You are trying to drive up to 8 LEDs simultaneously from one row output. You might be aiming for 10 mA per LED. I say this because a typical LED drops nominally 2 volts and an extra diode drop of 0.7 volts (matrix diodes) means there might be 2.3 volts left across each 220 ohm column resistor. So, 10 mA is my estimate and, if you want 8 LEDs activated that, a current of 80 mA.

Well firstly, the HC595 cannot be hoped to supply that sort of current. If you look at the absolute maximum ratings in the data sheet is says 35 mA per output pin so, your expectations are far exceeding your hardware.

And this causes the problem you see because it erodes at the output voltage to such a degree that the current delivered to each LED becomes "variable". A batch of LEDs might indicate that the average volt drop at 10 mA is 2.00 volts but, the range of volt drops might be from 1.9 volts to 2.1 volts.

At the moment you are driving each column of 8 leds with a shared dropper resistor and forcing all 8 to have the same forward voltage drop. This causes current hogging and can blow some of the LEDs.

Not the answer you're looking for? Browse other questions tagged arduino led multiplexer led-matrix or ask your own question.