I've been a tinkerer and hobbyist for 20 years now, but mostly in software. I've done my fair share of simple soldering (replaced controller ports on an original Xbox with actual USB ports, for example) but only have the vaguest idea of how electricity actually works.

All that being said, I've got a virtualization setup that I love and for which I'd like to sort out an audio playback solution. Basically, I just want to be able to funnel two analog stereo sources into one amplifier and not damage any of my hardware.

The first thing I did was buy one of these and ran it backwards, effectively. The amp was connected "Amp Input" and my two sources were connected to the A and B channel outputs. That worked fine, but before long I wanted to eliminate one of the (now three) boxes on my desk.

After some googling, I wound up with this (likely often cited) article: http://www.rane.com/note109.html and set to building myself what I understood as the "right" circuit. Enter this fella: 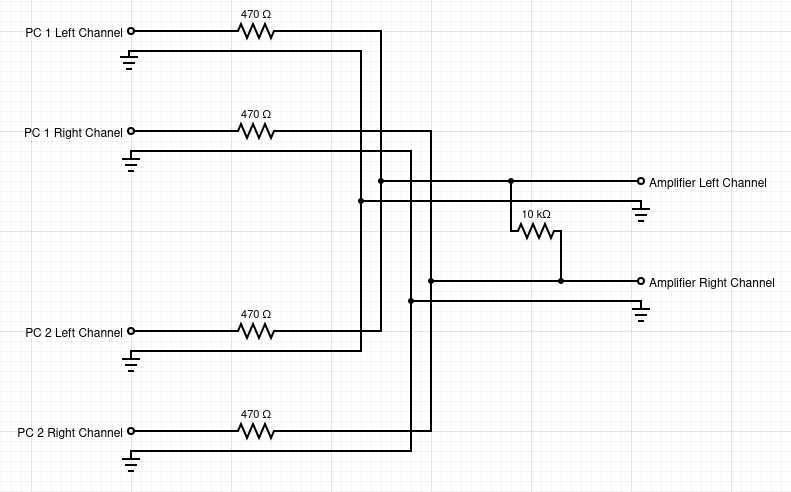 PC 1 is onboard audio on a fairly high-end motherboard, originating as a TRRS 1/8" connector. PC 2 is the 1/4" TS output from a Native Instruments Komplete Audio 2 USB audio interface. The amp takes two RCA inputs.

My solder job really sucked, but the connections were sturdy. I just used some high end(?) RCA cable I had lying around and a few other connectors. Once complete, I wrapped the whole shebang in electrical tape (no heat shrink at hand) and connected everything. And wouldn't ya know it - everything worked!

I have since discovered an issue, however, and I'm nearly certain it's my cable.

If I have the amp cranked, there is a very audible, pulsing hum. It sounds like cicadas, actually. It didn't take long for me to realize the pulses matched exactly with the "breathing" effect from my motherboard's LED controller. I've got two strips of white LED's pulsing, and the buzzing corresponds with the fade in either direction. When they're either fully off or fully on, there's no noise.

Predictably, when I remove the 1/8" TRRS connector from the motherboard, there's no interference. A little more interestingly, the signal noise also vanishes if I disconnect the outputs of the USB sound card.

So... what have I done? What might solutions be other than changing the lighting? ;) What did that little box do that I could replicate, perhaps?

Thank you all in advance for any help!

This is not really an answer, just help in identifying the problem.

the signal noise also vanishes if I disconnect the outputs of the USB sound card.

This means it could be a ground loop issue. So, please try this: 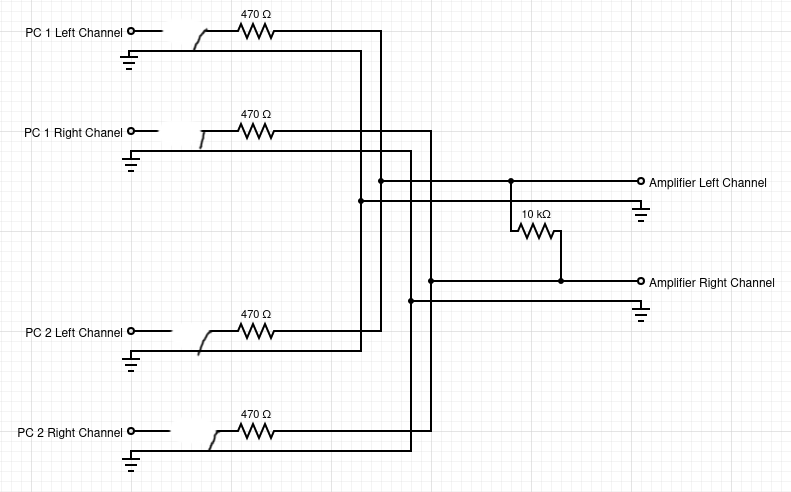 This means you desolder the end of each 470R resistor from the wire that goes to the signal wire of your TRS jacks, and solder them to the ground wire of the same jack instead.

Since signal is connected with ground, no sound should come out of the amplifier, and you certainly won't hear any PC audio.

If you still hear your LED PWM in the loudspeakers with this arrangement, it means the potential of "ground" is different between all the points labeled "ground". So "ground" which should be 0V contains audible signal voltage instead. The cause can be high current (like your PWM LED current) flowing through ground wires, which do not have zero resistance, and this creates noise voltage.

If this is the case, then the problem must be fixed at the source, and the chopped LED current should be routed away from the sensitive parts. How to do that depends on how your LEDs are wired, how the controller is wired etc, so you will have to post more info and schematics.

But at least this simple test can narrow it down to "ground loop" or "something else".

Exposing myself to the danger of probably missing your intentions, my suggestion would be to use an OPAmp summation amplifier (or rather two OpAmps for the two of your channels) instead of the voltage dividers comprised of the two 470Ohms resistors.

Because the input impedance of an OpAmp is very high (at least megaohms), you can choose pretty much higher resistors for your voltage divider. You could for example use 47 kOhms (x2) instead (in the linked article R1...R2; twice of course).

The summation amplifier is based on the fact, that the inverting input is always kept at ground potential (the one connected to the non-inverting input of the OpAmp), so the currents through R1 and R2 sum up, and ultimately flow through Rf. If you choose Rf = 47k also, you will get a unit gain mixer.

Apart from that: why do you want to build such a really truly basic circuit yourself? Why not just buy a simple mixer if all you want is a working solution. For example something like this one (really only a random pick, no recommendation).

Not the answer you're looking for? Browse other questions tagged audio circuit-design emi-filtering stereo summing or ask your own question.