find a point on root locus for specific damping ratio?

Although I have seen many types of root locus plots which have some curved behavior. I cannot find the poles for which my system has a given damping ration of \$ \zeta = 0.59 \$. I need to somehow find the intersection point between the root locus path and the damping ration line by hand, without using MATLAB. for the following 3rd order system: $$ G(s)= \frac{K}{s(s+3)(s+7)}. $$ 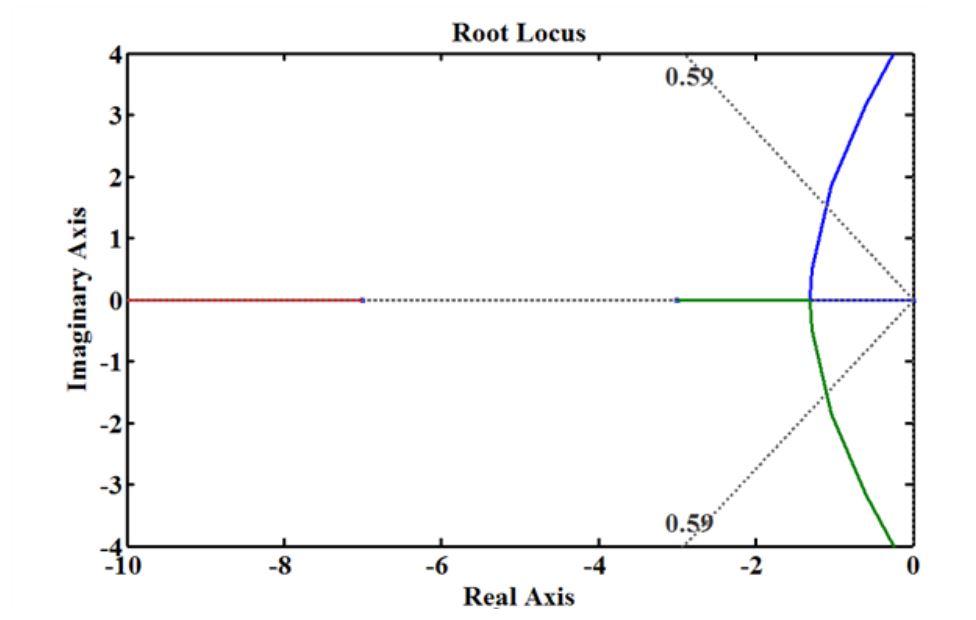 The third pole at S = -7 recedes away from the origin along the negative real axis, its effect on the overall transient response becomes less significant. It may generally be ignored if its magnitude is at least 10 times greater than the real part of the complex conjugate roots (which it is).

Therefore you can treat the 'curvey' part of the locus as though your system was second order.

To determine the values of the pair of complex conjugate roots you can use a graphical method.

Damping ratio, zeta = 0.59. Draw a line on your root locus plot from the s-plane's origin to the locus at an angle of cos^-1(0.59) to the real axis. Now you can read off the axes the real and imaginary values of the poles level with where the line from the origin crosses the locus.

You now have the complex conjugate pole values and only need to determine the value of the third pole. You do this by solving the characteristic equation with various values of k inserted.

Enter various values of K into this equation and solve for S until you converge on the pole values for the complex conjugate pole values which you obtained earlier graphically. You now also have obtained the third pole value and as a bonus you have the value of K which gives these three pole values at a damping ratio of 0.59.

The difficult part is repeatedly solving the cubic equation and I am unable to help you with that.

Firstly, you need G(s)H(s), the loop transfer function. I’ve assumed that you have unity feedback and so H(s) = 1.

Secondly, your K (capital K) is not actually the gain because your transfer function is in standard form.

Putting your transfer function in the form necessary to isolate k.

The denominator of the closed loop transfer function (the characteristic equation) now becomes:-

This means that K = 21k Where k is the dc open loop gain which is to be varied.

Not the answer you're looking for? Browse other questions tagged control stability root-locus or ask your own question.

1
How to find damping ratio of a 4th order system?

3
Finding desired closed-loop poles from root locus
0
Root locus, where do they leave the line parallel to imaginary axis
3
Pole Zero Cancellation on a Root Locus
2
Does this Root Locus analysis contradict my understanding of Nyquist stability criteria?
0
Given desired overshoot graphically find k from the root locus (Scilab)
0
How do I find value of gain that stablizes the system from root locus?
1
Trouble with meeting design specifications of a second order system using Matlab