Is there a relay package which can be triggered by a numeric coded pulse?

I would like to design a simple relay which is triggered by a series of pulses rather than just a high signal.

e.g. the relay would have a serial data input. The relay would need to be "preset" with the code which will trigger it - e.g. 119. Then if you send it 01110111, the relay latches. Then sending a reset code (or the same code) could unlatch it.

I know this would be a fairly simple logic circuit to make, to drive a standard relay, but I'm wondering if such a product already exists, what it would be called so I can find it in component catalogues.

Update: the signal would be sent from an existing system which can be programmed to send pretty much any digital signal sequence (e.g. faking RS232 or other encodings) but only has one output line, and I can add line level conversion if needed.

Update 2: as I only have one driving line, I cannot provide a clock signal, so it must be asynchronous serial.

I know this would be a fairly simple logic circuit to make, ... but I'm wondering if such a product already exists, ...

It probably doesn't exist.
When you have the luxury of one or more wires you'd typically use a versatile or robust solution.
One which offers more than just unsolicited command shouting, such as I2C.
One that isn't as susceptible to noise as a single ended wire. Such as RS-485.
One which layer 2 protocol contains data integrity checks, such as CAN-bus or MODBUS-RTU.

Shouting 01110111 over a wire won't be a suitable solution in the industry for obvious reasons.
It is however widely used in cheap 433 MHz remote control sockets. A set of dip switches then configures the numbers it will listen to. 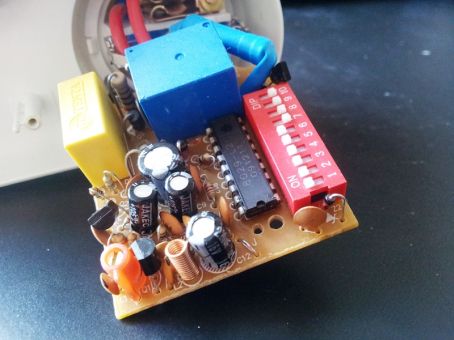 |share|improve this answer
answered Jan 7 at 7:07

Not the answer you're looking for? Browse other questions tagged relay programmable-logic or ask your own question.

8
Which relay - Mechanical or Solidstate?
0
Which relay switches can be activated by the parallel port?
3
Simple AC line state detection for digital controller input
6
Use power line to communicate between devices - simple communication
0
Simplest Light triggered relay
5
Is there such a thing as a pulse relay?
0
Energizing relay using short pulse signal
2
Handling high pulse current through relay contacts
0
Which relay do I need?