On the possibility of steel nails as EMI filters

I live in a place where ferrite beads for EMI suppression are hard to get. I thought steel had a very high iron loss, especially at high frequencies. So is it possible at least theoretically to use hard steel nails to attenuate high frequency noise in, say, power supplies?

I thought steel has a very high iron loss especially at high frequencies. So is it possible at least theoretically to use hard steel nails to attenuate high frequency noise in say power supplies?

No, not really. A ferrite bead (for instance) relies on the outer ferrite material (not the through-going wire) being both a poor electrical conductor at low frequencies but, at high frequencies, becoming a lossy capacitor and capable of turning EMI into heat. Here are a few examples from Murata: - 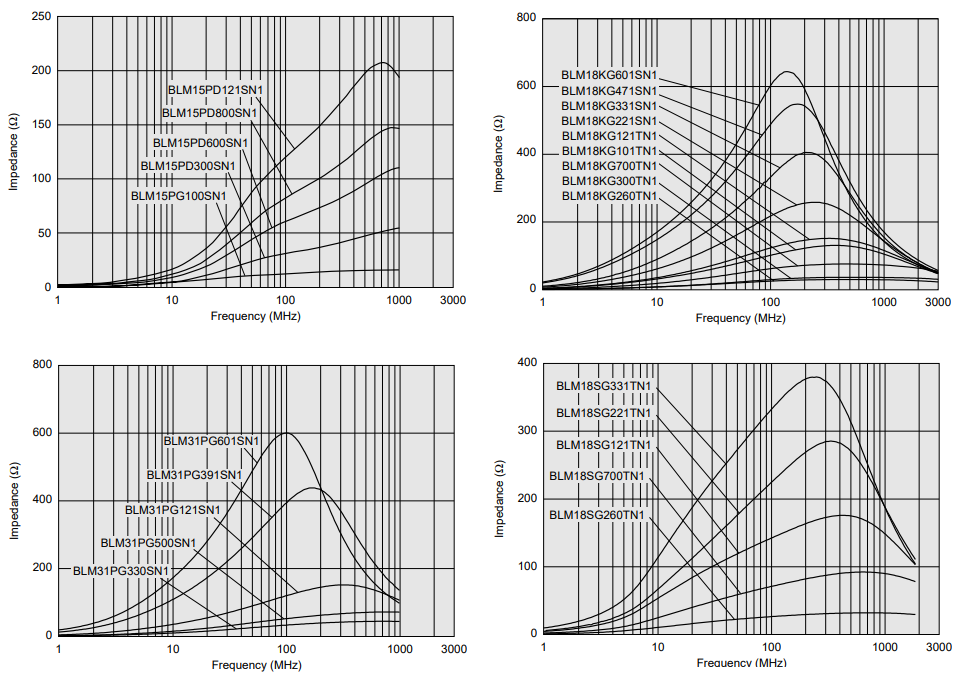 As you should be able to see, FBs are designed to target a specific range of frequencies and, different values in the same model range can be chosen to give better attenuation at certain parts of the spectrum whilst maintaining reasonably low losses for signals that should not be significantly attenuated.

A nail doesn't have one of the vital characteristics of ferrite that make it very useful as an attenuator namely; that it acts as a lossy capacitor as frequency gets higher and therefore resonates with the parallel inductance of the through-going wire.

There is a good document from Analog Devices that explains things in more detail and that document shows the developed model for a Tyco Electronics BMB2A1000LN2: -

R1 and C1 represent the lossy dielectric of the ferrite material and you just won't get that with a regular piece of iron or a nail. In case anyone notices the typo in the ADI picture above (L1 = 1.208 uF) should read 1.208 uH thus producing a peak resonance at around 112 MHz.

People used to make lossy inductors (chokes) by scramble-winding 100 turns around a 100 ohm resistor; have the choke and resistor in parallel.

The scramble/random winding was to minimize the coherent capacitance between layers of the wire, thus reducing risk of any resonances.

If this RFC Radio Frequency Choke were in the plate of a Class C amplifier, you'd probably use a 2_watt 1,000 ohm AllenBradley resistor; the large resistor was needed for surviving the high voltage.

The full theory here is very messy. You have skin effect and hysteresis loss in play. So, I thought I'd do an experiment. I close-wound a coil of #32 magnet wire on a 10D 3" galvanized steel nail. Here's the coil:

Note that the ruler is centimeters.

I measured the attenuation with the coil placed in series between a sinusoidal function generator and a scope with a 50 ohm terminator across its input. From that, I calculated the impedance versus frequency: 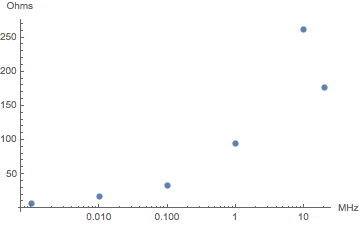 Not so different from a ferrite choke.

For more detail, I took more measurements with a tightened-up test setup. I give raw measurements for your computational enjoyment. Input voltage was 1V RMS sine waves: I readjusted the function generator output for each frequency. The time delay through the setup with the coil shorted was 29 ns, measured with a square wave. I have not corrected the delay below for this.

The "resonance" is extremely broad.

As Andy explained, steel won't work. Besides, its magnetic permeability gets lower as frequency increases, and if you wind an inductor over a nail, then the nail which is conductive will make your inductor act as a transformer with a shorted turn secondary* and the inductor will be rather useless.

You can get ferrite cores for free on old cables though. 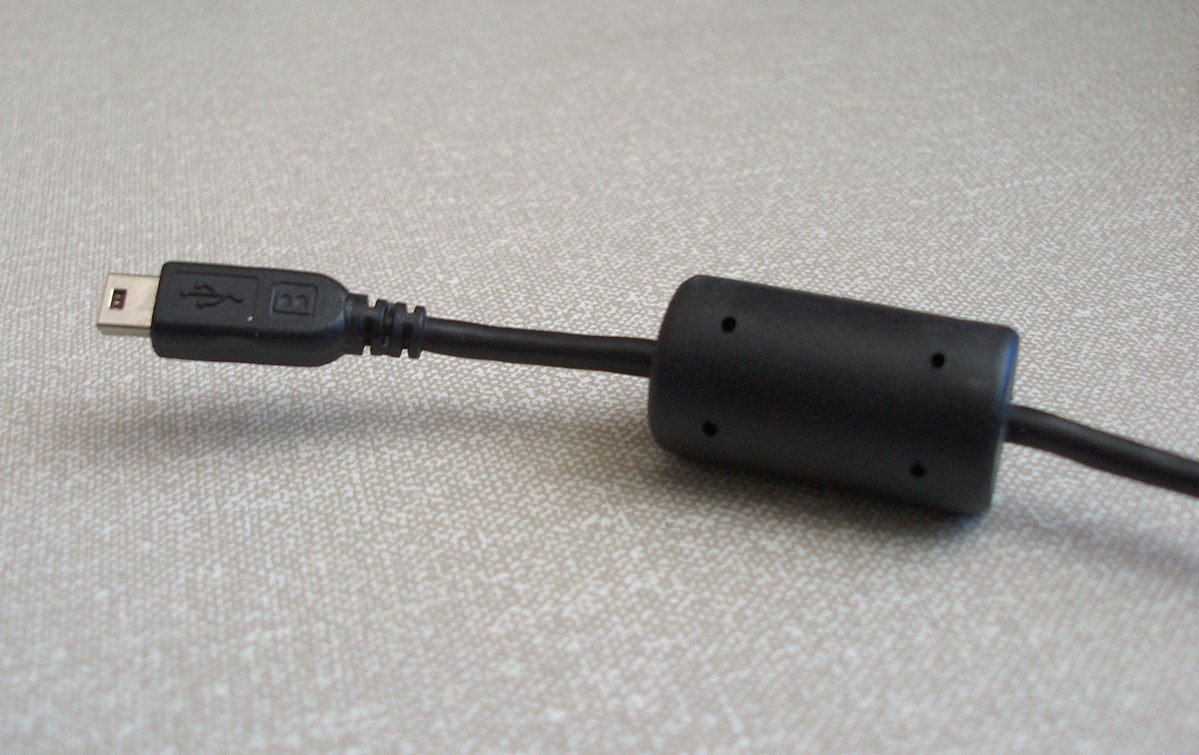 *: Inductors with solid conductive cores (like a nail) are a bad idea. The AC magnetic field will induce eddy currents into the core, which turns the inductor into a transformer. The primary of this transformer is the inductor, and the secondary is the core itself which is the same as a secondary coil with a single shorted turn. 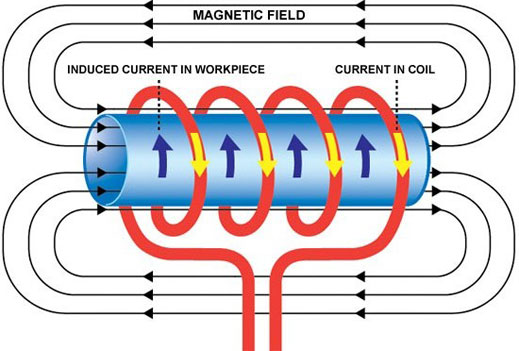 This increases losses (not a problem here) but it also makes the inductor less effective... not what you want for filtering.

No less a guru than Tom Rauch, W8JI himself debunked the idea of using a solid steel core in place of ferrite.

Bolt baluns, steel wool balun cores, and other solid iron or steel or laminated cores are a HOAX. They are not baluns at all. The text below explains why they are hoaxes.

Eddy currents generate their own opposing magnetic field to the incident field exciting the core. If the iron has large enough cross section eddy currents and the resulting counter MMF from the eddy currents will push the magnetic fields back out of the core. With increasing frequency, a given size iron particle has a frequency where inductance starts to decrease. This effect is from the "shorted turn" generating opposing flux. As frequency increases further, inductance decreases. At some frequency the core is no longer able to support the field, and because of eddy currents, actually reduces inductance.

For example, inserting a solid iron slug inside a small RF coil shows a behavior almost identical to using brass or aluminum slugs. Inserting a solid slug of iron might increases the magnetic field concentration and inductance near direct current frequencies, but at some higher frequency eddy currents and the inability of the core to follow field changes cause the flux concentration to decrease.....eventually reaching zero. At some frequency, the counter MMF takes over. Inductance is actually reduced by the core. ...

I have performed this very same test here with iron, brass, and aluminum cores with the same results. I used an MFJ-259B, while Tom used the expensive test equipment in his lab.

... Let's stop this myth about steel wool and steel bolt baluns. Audio core materials are laminated or powdered for good reason. RF cores are small insulated particles packed together for a reason. A solid material does not behave like a smaller cross section material.

The same principles for a good EMI choke also apply here. Sure, a balun passes RF on the center conductor and the inside of the shield. However, its principal function is to choke off any common-mode current on the outside of the shield.

Also, any unwanted energy that dissipates in an EMI choke is going to be in the form of heat. An EMI filter choke needs to have a high resistance at RF if it is not going to pass RF, same as a balun.