What is this symbol used in this D flip flop circuit? [duplicate]

I'm studying some notes on latches and flip flops. After the introduction of the D flip flop, the notes go on to explain its function - how it works. However, the first circuit diagram contains this weird circuit symbol :

Does anyone recognize it?

In case it helps, here's the full circuit diagram : 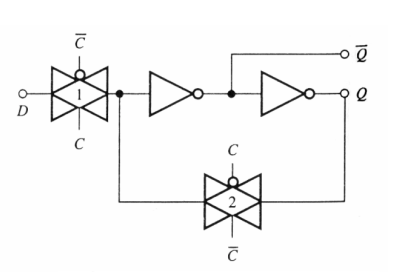 Could it be just a symbol replacing the whole D flip flop? In that case the inverters seem to be there so that we can get the 2 complementary Q outputs. I don't get the whole feedback thing though.

Thats the symbol for a transmission gate.

It's basically a switch controlled by a digital input. It consists of a CMOS-pair for the actual switch and another pair for an inverter for the control signal. The inverter is needed because the P-MOS and N-MOS transistor need inverted levels to turn them on.

A transmission gate can be used as an analog switch but of course it also works with digital signals like in this case.

Note also, to be exact: the circuit shown is not a D-flip-flop as stated, but a (transparent) latch.

12
What does this triangle/diamond schematic symbol represent?

4
Flip flop/latch with isolated differential input and differential output
1
Difference between D-Type Flip-Flop and Edge-Triggered D-Type Flip-Flop
27
What is a flip flop?
1
Is it D-Type Flip Flop?
0
Which is better latches or flip flop
0
Modification to the D flip-flop
1
Confusion about when a JK flip flop is triggered
1
SR FlipFlop Question
3
Flip-flop feedback timing problem