Delaying a TTL signal on the falling edge

I have a microcontroller (uC1) which outputs a TTL signal that simultaneously closes a switch on another microcontroller (uC2) AND controls a power MOSFET that cuts power to the entire system. I need to delay the MOSFET signal (via IC1) by about 20 seconds so that uC2 can save its files and go to sleep. Here's my basic schematic: 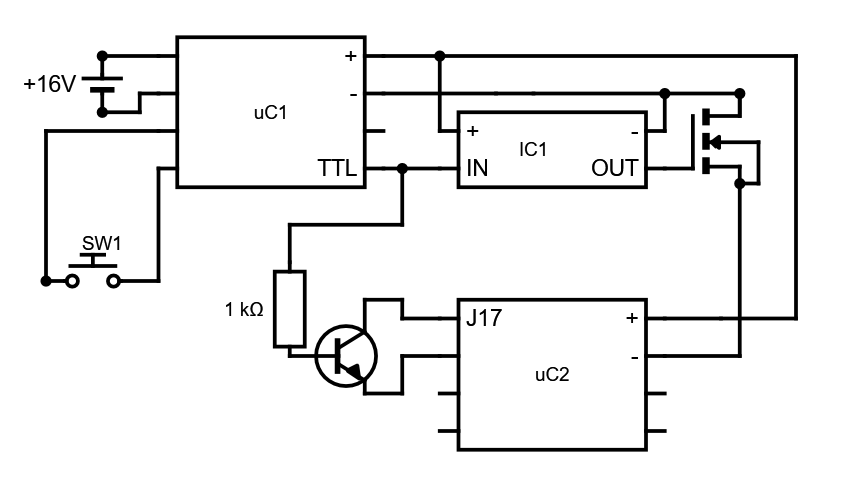 Closing SW1 changes the TTL level. Ideally the delay on IC1 would only happen on the falling edge (turning the system off, when uC2 requires time to enter sleep mode). Here's a basic timing diagram illustrating the relationship between the shifting TTL level and IC1's output to the MOSFET:

I've found some similar questions on here, particularly this one, and also this one, and it seems like a simple microcontroller is the easiest solution (I've got a few ATTiny's laying around). HOWEVER, current consumption is a real issue with this project, so if anyone has something even smaller, like a single 555 circuit, I'd love to know.

EDIT: My uCs require some explanation. Both are units which have been purchased and so I don't have access to their firmware. uC1 is an "intelligent battery system" which outputs power from 16V battery. uC2 is a device which records analog data to an SSD.

I'll have to get going, but really quickly:

This is a digital control problem and should be solved in software. By far easiest, most reliable and accurate. But:

Just as you can use an RC low-pass as delay for both edges, replacing the R with a diode in parallel with an R will make one edge (where the anode side becomes higher than the cathode side of your diode) charge the capacitor very quickly (because the diode then has low effective resistance) whereas the other edge becomes very slow (because then the capacitor has to be discharged through the parallel resistor).

share|improve this answer|
answered Jan 9 at 18:20

Meanwhile cheap a 14 bit counter with internal clock just needs a cap & R to compute which bit goes high to latch off power by gating a high side Pch FET gate and shut down power. This requires an understanding of avoiding rapid power down glitches and consequences of supply voltage to show details.

You can find a 74HC4060 and logic level PFET to do this and some examples on this site.

Then pour s'amuser read about 555 and long timers on this site.

Not the answer you're looking for? Browse other questions tagged microcontroller digital-logic power-electronics or ask your own question.