How to design electronics to last 40 years or more?

I've been reading about the Voyager space probes and am very curious about how you design electronics and instrumentation for a very long life (40+ years) without any physical maintenance.

My guesses so far include:

But what about the individual components themselves? How do you ensure a diode/transistor/capacitor actually lasts for that long? Or even harder, what about the (albeit primitive) microprocessors?

But there's got to be more to it than that? Or is this all part of the miracle of the probes, the fact that they're still working now?

You asked about Space probes specifically, but your question also had a more general flavour. I've addressed "how to make things last" generally. In space the eg AC mains aspects is vanishingly unlikely to be relevant - but power supply issues still are.
This answer is necessarily incomplete and overlaps other comments and answers in some areas. These are "out of my head". I my come back and add more later. Or not :

Longish ago I set out to build portable solar lights, mass manufactured in China, with a target lifetime of 20 years. That's what the client wanted. The client, the manufacturers and Murphy conspired against me at every turn. I failed. But managed to make some seriously robust products in the process. One of these days ... :-).

Not all of the following derives from the above experience. But, a fair amount is "informed" by it.

Do not use wet Aluminum electrolytic caps.

Do not use Tantalum caps.

Look to see if Rad Hard is liable to help (even if not in a radiation intense environment).

Temperature derate to take advantage of (or avoid) Arrhenius multiplier.

Use a superb conformal coating.

combine to allow the concentration of water reaching the surface to be very low and reaction rates are accordingly reduced.

Do not rely on bonding agents to hold things together or in place.

Be aware of ceramic cap attributes that may hurt you.
eg voltage ringing on voltage steps, microphonic and major voltage spikes from apposite vibrations.

Be aware of corrosion mechanisms.

But eg Nickel (or the now far less often seen tin) do NOT provide electrochemical protection - rather just the opposite. These coatings provide mechanical barriers to corrosion products. If / once / when the coating is breached over a small area an electrochemical cell is formed that selectively targets the underlying layer and the small area exposed means the corrosion rate is higher than if the while item was NOT plated (!).

In any case - DO NOT USE TIN COATINGS - see below

Do not use Tin coatings

Be aware that EMI matters.

Use only utterly reliable suppliers and ensure provenance for all parts sources.

The first thing you do is to use high reliablity parts. NASA specifies 4 quality levels starting with commercial (the lowest grade), moving to '883B (a mil standard); then QML level Q, and finally QML level V. With each step up in level, the screening requirements become more stringent; the paper trail more onerous; and the cost ever increasing.

With increasing quality levels comes lower predicted failure rates. This means that when you do your reliability prediction (or more accurately, your probability of mission success), your Ps increases with better quality parts.

Adequate derating also plays into this, particularly with new technology or new parts for which there is no history. We are sometimes told to use a 100 V MOSFET for a 20V application because of this.

Redundancy helps a lot. But with redundancy comes added complexity and more parts, which actually degrades the serial failure rate.

With any hi-rel design, you need to do an analysis to identify and mitigate, to the extent possible, any single point failures (SPfs). An SPF is a failure that would degrade or cause the loss of the entire function, or mission. SPF analysis is particularly important when redundancy is employed because you do not want a single failure to cause both the primary and redundant set of hardware to not work.

Finally, on those Voyager missions, I'll bet they were designed for an 8 or 10 year mission life, not 40.

While you cannot test your way into a highly reliable system, testing plays a big part in weeding out marginal parts. All of our assemblies go through some type of environmental stress screening, which includes functional testing over the expected temperature range, and temperature cycling, both powered and un-powered. Systems destined for space go through testing in a thermal vacuum (TVAC) chamber. There also may be vibration or shock testing, but these are usually done on a test article.

Several who have responded to this question mentioned temperature and its effects on reliability. So I thought I would expound on this a bit more.

Semiconductors exhibit a failure rate that approximately doubles for every 10 deg C increase in temperature. There are papers out there arguing whether 2X is the right value; that maybe it should be 1.8, or 2.5, or some other amount. But for purposes of this discussion I’ll use 2X as it is a value that’s “accepted” by industry, the government, and the reliability disciplines.

With that out of the way, it makes sense that, from a reliability standpoint, you want to keep your electronics as cool as possible. 85 deg C operating temperature is better than 95 deg C, and 75 deg C is better than 85 deg C.

But in addition to the operating temperature, be it average or peak, there is also the temperature swing, or variation. Temperature swings are bad from a reliability standpoint in that it is temperature changes that stress interconnects, particularly those involving IC’s or even discrete semiconductors. These temperature changes induce a stress on the interconnect between the component and the board due to the differences in Coefficients of Thermal Expansion (CTEs) between the component and the board. For example a typical FR4 PCB has a CTE of ~15 ppm, while a BGA package might have a CTE closer to 6 ppm. These differences in CTE cause a stress to be exerted on the solder joints that attaches the part to the board as the temperature changes. These stresses are proportional to the changes in temperature and the size of the package and over time, given enough temperature cycles, can lead to a fracture of the solder joint or attachment to the board.

Leaded parts, such as the old 14/16/20 pin flat packs are much more forgiving in this environment than are rigidly attached packages such as Ball Grid Arrays (BGAs) because the leads of the former provide a significant amount of compliance that reduces the stress on the solder joint.

The reason for bringing all this up is that what we usually care about is the reliability of the system as a whole, or more properly the Probability of Mission Success (Ps) of the system. Because of how temperature changes and the average operating temperature affect various aspects of the system’s reliability, it may turn out that it’s better to operate a system at a constant higher temperature (say 85 deg C) as opposed to letting the temperature swing from 10 deg C to 70 deg C on a regular basis.

I recall a business called Continental Testing Laboratories. They had the first computer I ever used. Punch cards existed for EACH resistor, capacitor, transistor, diode, that went thru the test/heat/test/heat/test/heat, where the parameters were examined for DRIFTING.

Components that DRIFTED differently from the other components were discarded.

They also XRAYed the components to look for voids and for foreign particles.

With all this, a 1 cent resistor becomes 100 cents, and has a small tag attached, so the final circuit documentation describes the recorded parameters for each component.

Transistors are assumed to track if they are differential_pairs inside a 6-lead metal case (such as 2n2020, if I recall rightly). Thus neutron bombardment in orbit is assumed to degrade the Beta of each transistor equally, and the "matching" is maintained.

The V_base_emitter is assumed to not perfectly drift, thus a design margin for offset voltage becomes part of your worst-case-design analysis (slide rules were used).

To implement anything better than about 8 bit or 10 bit ADCs is not possible using the allowed discretes. I think BurrBrown or TRW may have produced metal_hybird DAC networks that were shown adequately stable for decades.

Additionally, the team I worked in was allocated a THERMAL ENGINEER; he used finite element methods (on an IBM 1630) to model the heat flows.

Since the applications were space-borne, the allocated powers were SMALL, and a simple ground plane to a mounting stud (or 4 or 6 of them, to handle shock) was all that was needed to let heat flow out of the circuit/PCB/module to the spacecraft chassis and then radiate out into space.

To prevent freezing the spacecraft, I've heard shutters are used, these regulating how much of the spacecraft is actually exposed to the coldness of space.

A sample extract from Section-6 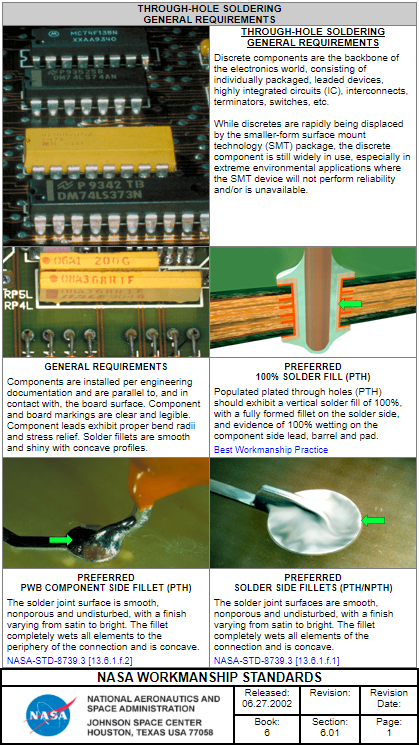 The Voyager mission was a major event in the history of FAULT TOLERANT COMPUTING with its STAR (self test and repair) computer. The computer would monitor its own performance, check for errors, and test itself comprehensively from time to time. Any module found to be defective would be replaced with a spare. I do not know how far this process has gone, which modules have been replaced, or what the spare inventory presently looks like.

The computer architecture is way more complex than mere triple or quad redundancy.

If you find a text on FTC, you are likely to find a discussion of the STAR computer and its reliability model.

Calculating MTBF would probably be the best way to do this. De-rating components is one way to increase MTBF.

Parylene is considered by many to be the ultimate conformal coating for protection of devices, components and surfaces in electronics, instrumentation, aerospace, medical and engineering industries. Parylene is unique in being created directly on the surface at room temperature. It is chemically stable and makes an excellent barrier material, has excellent thermal endurance, as well as excellent mechanical properties and high tensile strength.

Not the answer you're looking for? Browse other questions tagged reliability or ask your own question.

2
Can an electronic system be built with absolutely no single point of failure?
2
Are datasheet min/max values "guaranteed" for the lifetime of the part?

3
Speed of various prototype systems for digital electronics
34
Design for long term reliability?
0
How to specify HALT / HASS limits?
0
FITS in reliablity. How to convert number of failures in actual hardware testing to MTBF
3
Board to Board Connections in Potted Electronics