I have a transformer with several secondaries, and this is how I'm planing to control the inrush current: 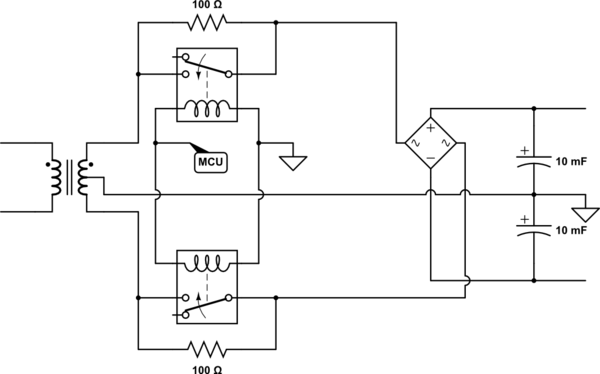 I'm using a resistor to limit the inrush current and MCU will energize the relays after a few seconds to bypass the resistors.

Putting inrush protection on a transformer primary is a pretty standard way of doing things because it also handles primary magnetization current inrush problems too.

Avoiding an MCU means having a small timer circuit that, when timed out (having been initially triggered by the instance of power being applied), activates the relay as you show in your diagram.

Or, you could avoid all the complication and use a negative temperature coefficient varistor/thermistor in series with your primary winding. This is a pretty standard solution in many power supplies.

EMI is created by the Relay contacts (V=LdI/dt) at some voltage with series transformer inductance and load capacitance can also create very high voltage spikes.

There is no evidence or spec that defines that the transformer "caused" this surge. In fact it is more likely that the 10mF Caps caused the surge. If they had a low ESR of 10 mOhm then you can expect a secondary surge of Vout/0.01 ohms.

An PTC NTC / aka ICL can reduce the range of peak current, is also a smart choice operating at 85'C.

Look for ICL specs rated for your load cap of 10mF.

By the way Transformers only cause surge currents in large units with Remanence during a power interruption and re-closure out-of-phase. This causes the peak flux to add to the stored flux then exceed saturation levels. Then XL(f)+DCR impedance drops due to significantly reduced Inductance. Large MVA large cores may hum loudly until stabilized. In this example the only surge is the low ESR caps causing rapid charge currents Vout/ESR that exponentially decay to the load current. This is based on the peak pulse currents because the % ripple voltage also describes the current % duty cycle.

Therefore this can be a bad solution for EMI if not done carefully or a good solution for an Audio power Amp (if done right) as done in my old Technics 100W Rx with a 5 second timer. The caps lasted 20 years,, which I considered OK, then I replaced all the e-caps on 1st sign of problems.

Typically a series Power R, bulk choke L and preload R were used. But this is ancient technology. 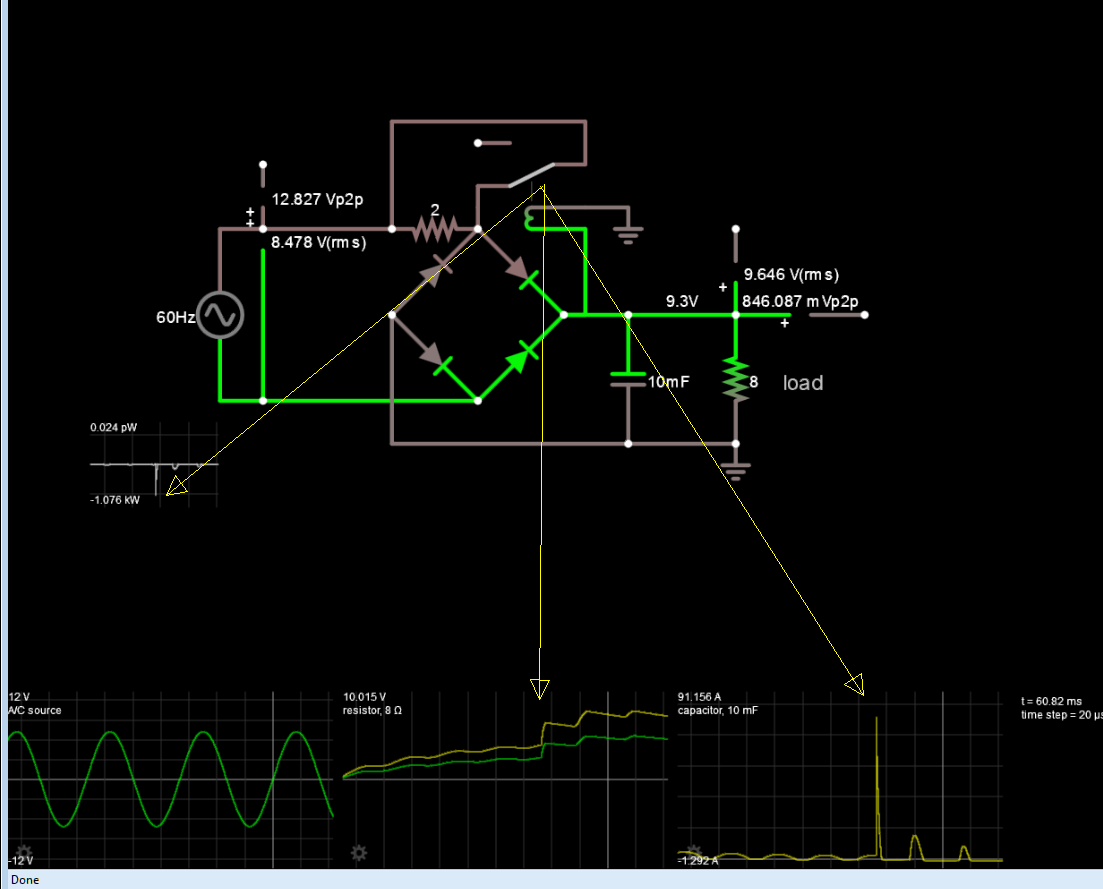 The more serious problem or annoyance is when the 10 mF wears out, the relay will be a loud buzzer and burn out in minutes as the ripple turns it on and off. So I added a diode and cap to prevent that. 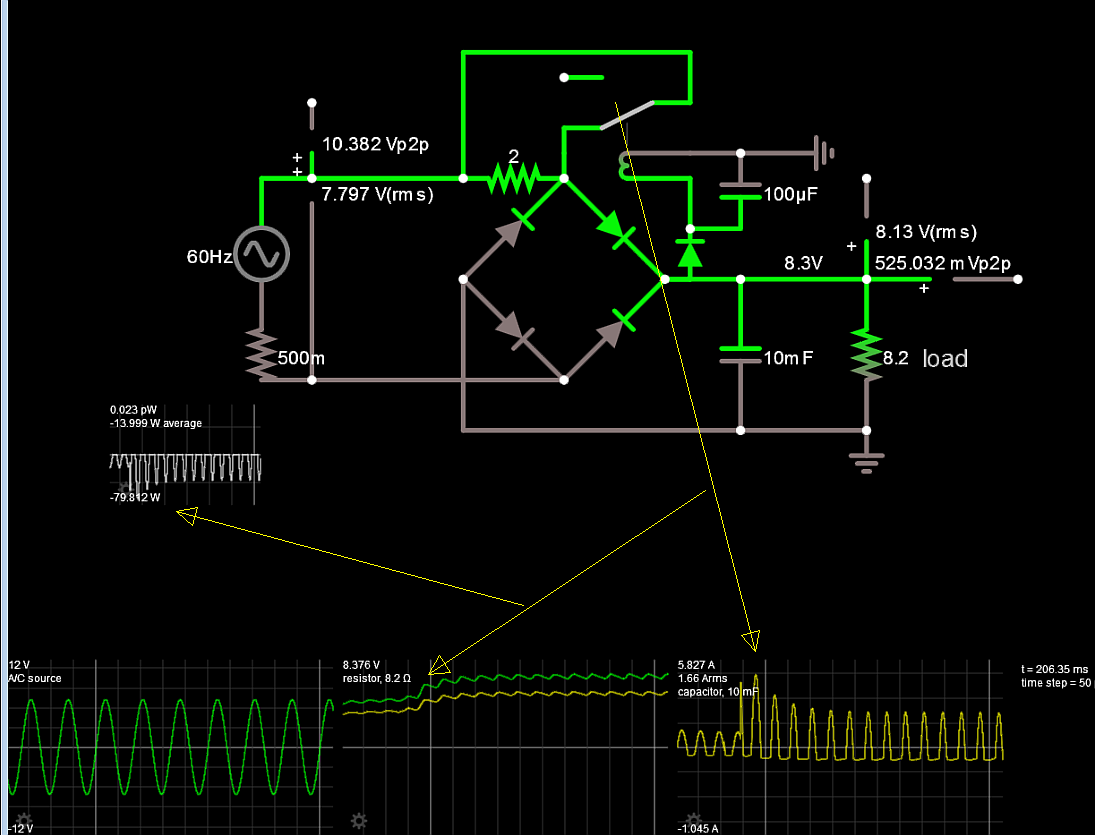 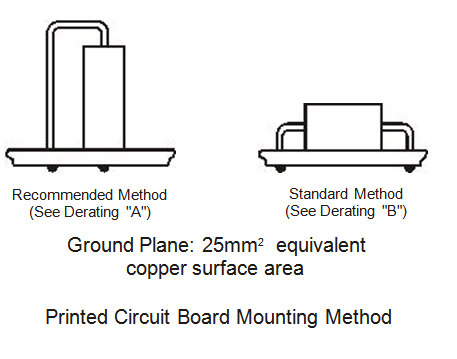 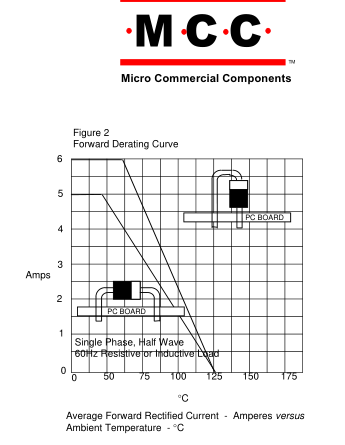 You asked in a different question (which you removed?) about putting an NTC on the primary and bridging it with a relay.

If you care enough about light load power consumption since an NTC will waste power, have issues going from light to full load and voltage dip while your NTC is heating up or similar, my recommended solution is NTC + relay on the primary side. As Andy said, inrush into your transformer is zero crossing insertion and transformer design dependent, but your NTC will handle that too if you put it on the primary.

The upside of an NTC over a straight resistor is in case your relay fails to open. At tens of watts of load or higher, that resistor will not be possible to have in series during operation whereas an NTC will be, although with some power losses.

The downside of this arrangement, apart from the added cost, is that your relay will bridge the primary to secondary isolation provided by your transformer so you need to use an agency approved relay in respect to coil to contact isolation. Plenty of them in the market to choose from.

Here is a simplified schematic: 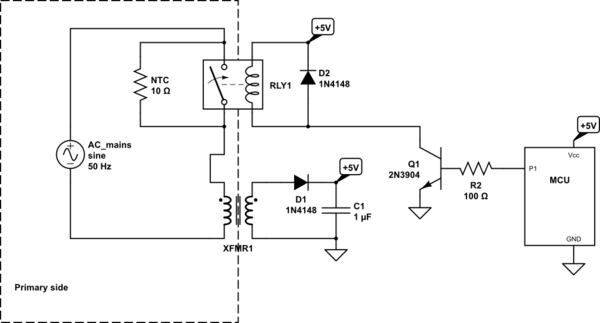