I am trying to understand the need for common-mode feedback. In books such as Design of Analog CMOS Integrated Circuits by Razavi, they seem to explain CMFB with a shorted output-input feedback loop - not sure why they do it like that.

Anyways, this brought circuit in mind to me without that feedback loop. Consider 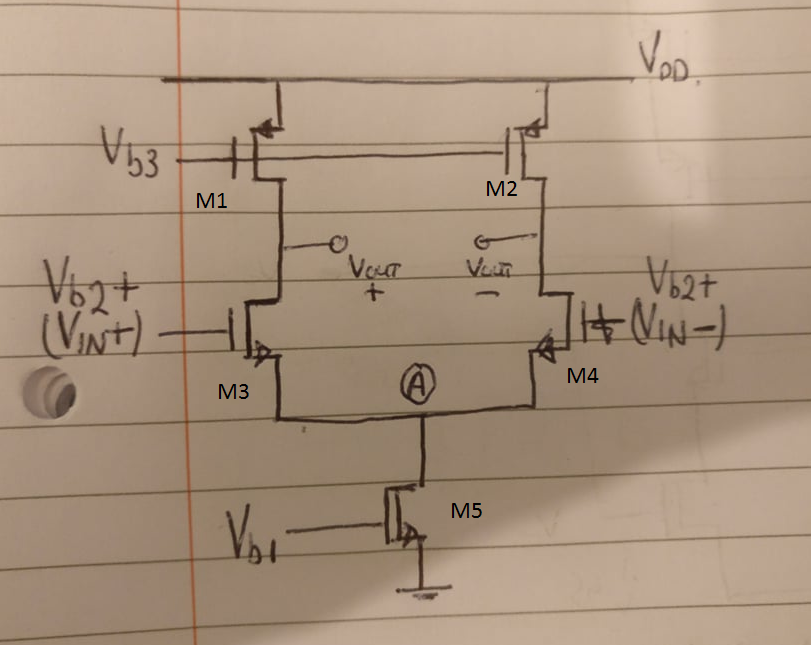 It's a differential amplifier with a PMOS current-source load. M3 and M4 are NMOS devices that are the drive transistors. They have a DC level of Vb2 and a small-signal of Vin+ and Vin-. Since, we are dealing in large signal purpose, I ignore the small-signal pertabations on the gates of M3 and M4.

The lower 80uA current will win and M5 will be forced into the triode/linear region in order to supply the 80uA . Due to this reduction, the voltage at node A (Vds of M5) must decrease.

The circuit should now be in equilibrium right (ignoring the small-signal voltage). In other words, M1, M2, M3, M4 are all happy that their gate-source voltages are now at the correct level to provide 80uA.

Here come's my question, what happens at the output voltage nodes? Do they go up or down?

We can figure out the ideas behind this sophisticated circuit solution in an intuitive way by thinking of the electronic transistors as of equivalent electrical elements - current and voltage sources. More precisely speaking, they are not sources but rather current-stabilizing and voltage-stabilizing nonlinear elements. When looking into the drain (with fixed Vgs), the transistor is a current source; when looking into the source (with fixed Vg), it is a voltage source.

Structure. From this viewpoint, in the lower part of the picture, two voltage sources (M3 and M4 sources) and one current sink (M5 drain) are connected in parallel to point A. In each (left and right) upper part, two current sources/sinks (M1 and M3 drains, and M2 and M4 drains) are connected in series. What is the point of all this? Let's consider the three basic operating modes to find the answer...

Biasing. The main idea of the differential (long-tailed) pair is to bias transistors not from the side of gates (the classic single-ended solution) but from the side of sources... thus there is no need for input biasing circuits. So let's set constant common input voltages Vb2 and vary Vb1 to adjust the desired bias current.

In the lower circuit part, M3 and M4 adjust their Vgs to pass (1/2 of) the bias current through their drain-source parts. Looking into their sources, the current sink "sees" two voltage sources "helping" it... as though it is shorted... and this is its favorite load condition.

In the upper circuit part, M3 and M4 sink (1/2 of) the bias current from M1 and M2 drains. As a result, Vout+ and Vout- change. The OP questions were, "What happens at the output voltage nodes? Do they go up or down?"

Without CMFB: To answer these questions, let's first suppose, although practically it is not possible, there is no common-mode feedback (CMFB) - the case shown in the picture. Then M1 and M2 act as dynamic loads, i.e., as current sources, that will try to restore the current. As a result, the output voltage Vout will vigorously change... and if we has increased Vb1, it will go down... and this is the answer of the question.

With CMFB: Now suppose the common-mode feedback is connected (not shown in the picture). Simply speaking, it sums Vout+ and Vout- by an op-amp and adjusts Vb3 with the purpose to keep Vout somewhere between the supply rails. So it is a voltage-type negative feedback that modifies M1 and M2 behavior - seen from the side of drains, now they behave as voltage sources, which voltage is set by the CMFB circuit; they are the so-called "active diodes". As a result, the output voltage Vout will not change when changing Vb1 (M5 bias current)... and this is another answer to the question.

The question is answered... but for a real benefit of our reasoning, we should consider the other two modes. Thus we will really "understand the need for common-mode feedback"...

Common mode. In this case, we simultaneously vary both input voltages Vb2- and Vb2+ in the same direction (Vb1 is constant to set the desired bias current). The emitter voltage of the common point A follows the input common voltage. To keep the bias current unchanged, the current "source" adjusts its internal resistance thus “helping” the voltage “sources”. Looking into the current sink, they "see" its extremely high differential resistance... as though it is an open circuit... and this is their favorite load condition.

Differential mode. Now, we simultaneously vary the input voltages Vb2- and Vb2+ but in opposite directions. The emitter voltage of the common point A stays constant (like a virtual ground). The emitter current "source" works at its favorite load condition - shorted.

Now the most interesting part of our explanation... In the upper circuit part, the common M5 drain current is steered between the two branches of the differential pair. Note the common mode feedback is not active since the average voltage (Vout+ - Vout-) is zero (another virtual ground). So M1 and M2 act as transistors (current "sources"), not as "diodes" (voltage "sources"). They serve as dynamic loads and the differential gain is maximum.

Finally, I want to get back to the beginning of the OP question.

"In books such as Design of Analog CMOS Integrated Circuits by Razavi, they seem to explain CMFB with a shorted output-input feedback loop - not sure why they do it like that."

With this introduction (Chapter 9.6, page 314), the author tries (quite awkwardly) to introduce the reader to the idea of the common-mode feedback. It is hard for me to imagine how many thousands of people (including OP) have tried to understand what lies behind the statement, "In some applications, we short the inputs and outputs for part of the operation..." Now I will add another attempt to explain it in an intuitive way...

Each branch of the differential pair (M1-M3 on the left and M2-M4 on the right in the OP picture) can be thought as of a "voltage divider" consisting of two elements - pull-up M1/M2 and pull-down M3/M4. Pull-up elements can be considered as sources and pull-down elements as sinks.

If the pull-up transistor acts as a current source and the pull-down transistor as a current sink, each of them will try to impose its current. If there is even a small current difference, the output voltage will vigorously cnahge and the gain will be maximum. This is the well-known dynamic load technique. This arrangement should be used at differential mode.

If either pull-up or pull-down elements in a branch are voltage type, they will fix the output voltage and the gain will be minimum. This is what the author wants to say in the intro.

First (page 315), he considers the case where, by means of the voltage-type negative feedback, bottom transistors M1 and M2 are made acting as "voltage sinks" (active diodes). 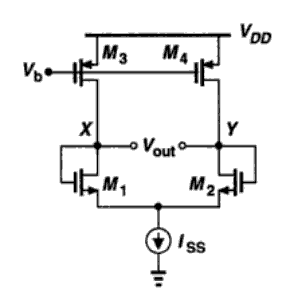 Then (page 324), he considers the case where, in the same way, top transistors M3 and M4 are made acting as "voltage sources" (active diodes). The result is the same. 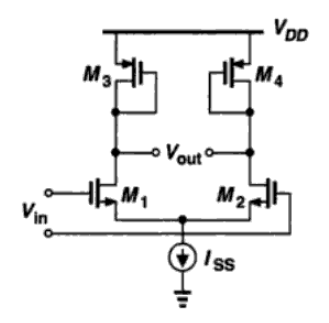 Both versions should be used at common mode while the version with conflicting current sources and sinks should be used at differential mode. In practice, the same circuit acts, depending on the mode, either as one or other version.

To finish completely this story, I will answer the main OP question on the top:

I am trying to understand the need for common-mode feedback...

Due to the huge gain, the outputs of the differential amplifier with dynamic loads look like hypersensitive scales that cannot be easily balanced. So the output voltages Vout- and Vout+ can hardly be held between the supply rails and they easily reach them. This can only be done with the help of the stabilizing negative feedback.

In our fully-differential amplifier, these functions are separated - the bias current affects only both single-ended output voltages while the input differential voltage affects only the difference between them. This difference is floating and the bias current should first set it in the middle "position" between the rails... and then keep it there. As it is too hardly because of the dynamic loads, there is a need of another negative feedback to do this work... and this is the common-mode negative feedback. It will keep constant the common output voltage (the averaged of Vout- and Vout+) regardless of any interferences that attempt to change it.

So "common-mode" here implies "common-output voltage" and this has nothing to do with the "common-input voltage". CMFB exactly means "negative feedback that keeps the common (averaged) output voltage at some desired level between the rails".

I have prepared a colorful picture to illustrate the written here. I thought to use it in a new general question about this clever idea... but first I put it here to give you food for thought... 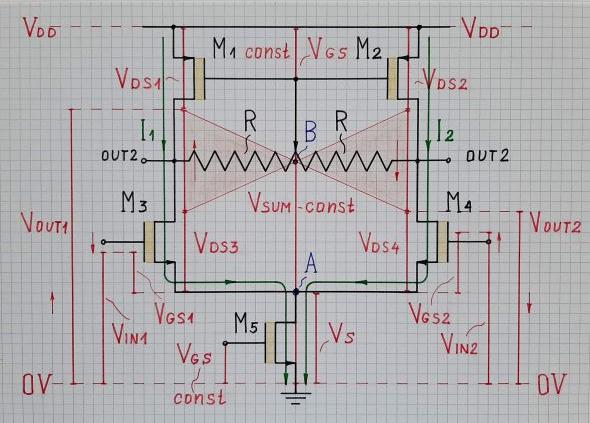 -2
How do we explain the common-mode feedback in an intuitive way?