What is the difference between the below two circuits?

I know the bottom circuit has 'ground', but what does that mean exactly? Why would someone want to construct the second circuit over the first? And, what would be an example of doing the bottom on a breadboard -- where does ground 'go'?

Finally, when doing the above in EveryCircuit, the first example doesn't even work, or allow current to flow through it. Why is this? (The same circuit works on my breadboard). 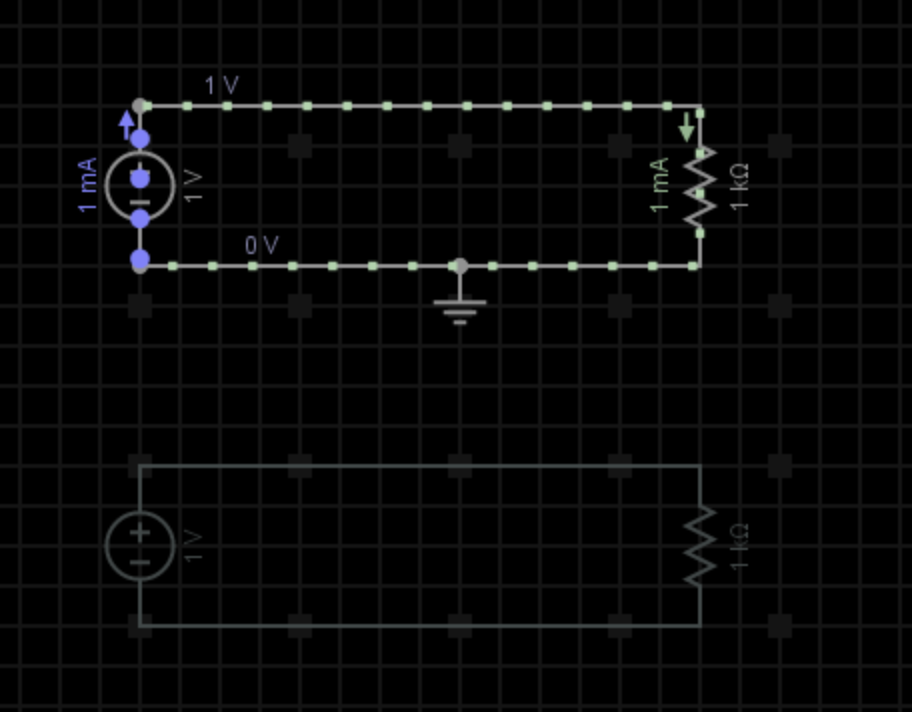 David542David542
14911 gold badge11 silver badge33 bronze badges
New contributor
David542 is a new contributor to this site. Take care in asking for clarification, commenting, and answering. Check out our Code of Conduct.
\$\endgroup\$
add a comment  |

There is no functional difference in reality. However, your simulation software is stupid and needs to do calculations, so you need to tell it which node you want to represent zero and will become the reference to which every other node is measured (remember that voltage is a potential DIFFERENCE).

The circuit with a GND connection has designated that node as zero volts, he node with which all other nodes are measured with respect to.

Note that physically making that GND connection to something else in reality doesn't make your circuit operate any differently, but does make it so your circuit doesn't "float" if you are using a battery source or some other isolated source. It anchors your circuit to a known potential and not doing so can become an issue for things like noise, shielding, EMI, and safety (arcing for high voltage things).

Here, as in most electronics, "Ground" simply marks the point in the circuit that we want to call "Zero Volts", and use as a reference when measuring voltages elsewhere in the circuit. It does not usually imply a connection to the earth - we can talk about Ground in portable equipment, or in battery-powered circuits on a plastic breadboard.

The Ground symbol has no effect on the operation of the circuit, but is usually required by circuit simulator programs so that they know what point to use as a reference when calculating voltages elsewhere.

In AC power wiring and some radio antenna systems "Ground" (particularly the green "Safety Ground") does indicate an actual connection to the earth.

share|improve this answer
answered Jan 13 at 1:16

Many simulators compute all voltages relative to some "ground" node, and require that some node have a voltage which is set relative to ground. To accommodate schematics where some groups of nodes are "floating" relative to ground, however, simulators will can often identify islands that don't have any ground connection and, if any art found, select some arbitrary node in each island and set its voltage to 0 relative to ground.

In the upper schematic, if you were to attach scope probes to the ends of the resistor, they might report readings of +1.0V and 0.0V, or 0.0V and -1.0V, or possibly (though I've never seen such behavior) +0.5V and -0.5V. In the second schematic, however, the voltages would definitely report +1.0V and 0.0V. In the third schematic, the upper portion's voltages are all measured relative to ground, but the lower island's voltages are not. Thus, a simulator would treat the lower island like it treated the second schematic, adding a "ground" node connection.

share|improve this answer
answered Jan 13 at 20:10

There is no functional difference inside the circuit, the same 1V potential will take effect on the specified resistor, but there can be a big difference from an external point of view.

In the 2nd case, you can only have a +1V and 0V (the specified grounding).

share|improve this answer
answered Jan 13 at 11:50

There is no any difference between these two circuits in this case.

But the position of ground has significant role in the circuits. The ground in a electrical circuit is the node where we have our "zero volts".

Keeping this in mind consider two batteries connected to each others as shown; 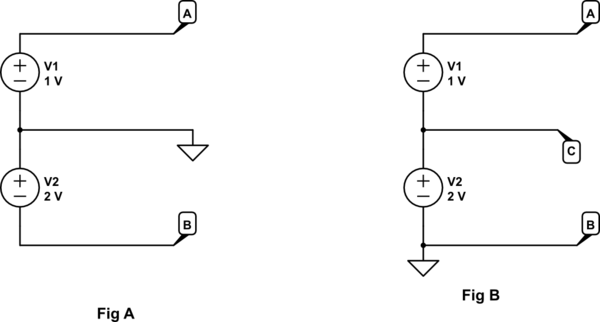 Not the answer you're looking for? Browse other questions tagged circuit-design ground or ask your own question.