In many articles regarding transistor biasing I see a circuit like below and I don't really get what is the point of biasing like this WITHOUT emitter resistor Re?

When emitter branch is connected straight to the ground, wouldn't the VB voltage always be around 0.7V no matter the voltage divider output? "The rest" of biasing voltage would only result in greater base current. In other words - it's like we tried to bias a diode.

With emitter resistor it's different story. VB would be then VB=0.7V+VRe - we get a steady VB voltage with any value we want (e.g. 3V).

Could someone please clarify this? 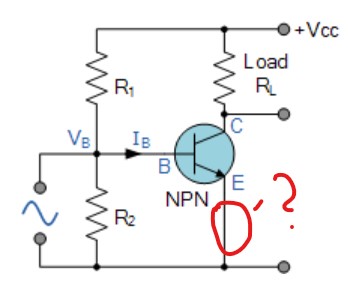 Dawid WDawid W
1911 bronze badge
New contributor
Dawid W is a new contributor to this site. Take care in asking for clarification, commenting, and answering. Check out our Code of Conduct.
\$\endgroup\$
add a comment  |

The point is to eliminate the need for one resistor. Having said that, I'm not going to argue that this is a good idea.

Using this kind of biasing requires very good knowledge of the actual value of \$h_{FE}\$ at the desired bias point....we usually don't have that knowledge in the real world, so adding an emitter resistor helps to compensate for changes in transistor parameters.

share|improve this answer
answered Jan 13 at 18:39

Below are shown two alternatives, which are somewhat less sensitive to transistor characteristics. Even so, transistors might be specified by binning \$ \beta \$. Doing so is usually considered not-worth-it.

Version (b) employs shunt feedback, which adds linearity, but reduces gain and reduces input impedance. It is biased more reliably than version (a). You might actually see such a circuit as version (b) in use, where maximum collector voltage-swing is an important design parameter:

share|improve this answer
answered Jan 13 at 19:04

Just these are two different configurations - without and with negative feedback, each with its advantages and disadvantages...

The first is a special case of the common-emitter stage since its emitter is simply grounded (in the general case, the emitter of the common-emitter stage is "shifted" by another voltage). It has maximum gain and maximum output voltage swing (because a minimal voltage drop is lost on the transistor)... but it is affected by temperature variations and other interferences. Also, the voltage divider is heavily loaded by the low resistive base-emitter junction (diode).

Inserting a resistor into the emitter introduces a negative feedback (the so-called "emitter degeneration"). By passing its collector current through the resistor, the transistor itself "lifts" its emitter voltage... and it begins following the input bias voltage at the base. As a result of this opposition, the gain decreases and the output voltage swing decreases (because of the voltage drop across the transistor)... but the input resistance increases... and the voltage divider is less loaded.

The emitter resistor serves as a current-to-voltage converter for the collector current. Since the transistor keeps the voltage drop across it equal to the input bias voltage (VR2), the combination of these two elements acts as the opposite *voltage-to-current converter". It sinks a relatively constant current, which is slightly dependent on temperature changes, beta, etc...

When emitter branch is connected straight to the ground, wouldn't the VB voltage always be around 0.7V no matter the voltage divider output?

This is not a good biasing scheme for a linear amplifier because it lowers the source impedance which makes the relationship between Base current and source voltage more logarithmic than linear, and it makes the bias point more temperature sensitive.

However it is useful in situations where a well defined bias voltage is required, eg. in a switching circuit, or for peak detection of an AC waveform. It also makes the input less prone to 'blocking' caused by the Base rectifying large AC signals and building up a negative bias on the coupling capacitor.

Yes, but sometimes that's what you want.

share|improve this answer
answered Jan 13 at 20:08

R2 doesn't really do much of value in this circuit.

For it to act as an amplifier, the base is biased with a current from the supply to result in the transistor being in the active mode. So if you have a transistor like the common 2SC2712Y you know the hFE is between 120 and 240 @25°C so you can calculate the required resistor for a given load resistance. BCX70H is even tighter specified (180-310 @2mA 25°C).

If you use the latter, with a 10V supply, R2 = open and RL = 2.5K then R1 would be around 1.1M. Worst case (at 25°C) the DC collector voltage would be between 6.15V and 3.37V, so it could work with output amplitudes up to around 6Vp-p before clipping. Less than that over a range of temperatures and taking tolerances of resistors into account.

R2 diverts some of that base current to ground and adds more uncertainty to the resulting base current, as well as reducing the input impedance, none of which you probably want.

Others have made relevant comments about the advisability of including a bypassed emitter resistor to add negative feedback to the DC operating point, which are valid enough where that is necessary (very often it is, especially if you have high output levels, wide temperature range). When you do that, you usually want R2 to better control the voltage on the base, and the resulting emitter current. Of course you lose the voltage across the emitter resistor/capacitor (maybe a volt or two) from the maximum output swing so it's not all gain- in fact it may be worse at room temperature, but you gain temperature stability at the expense of complexity and parts cost. Another approach is to derive base current from the collector voltage and lose the emitter resistor (again, you need a bypass capacitor to go along with the resistors or you excessively degrade your AC gain).

Not shown in your circuits is the input coupling capacitor.

Vbe isn't actually a constant 0.7V. It's just mostly constant. It varies very slightly with current, just like a diode does, and this is fundamental to its operation (as in it actually needs this behaviour to operate the way you expect it to). As an approximation to make certain forms of analysis easier, we say 0.7V is constant with respect to base current, but since that is an approximation it doesn't always hold up such as in the case of your reasoning.

share|improve this answer
answered Jan 13 at 21:16

I've read all the answers (surprised to receive so many, thank You all) and I feel like I need to specify my way of thinking.

In my understanding, biasing allows us - among others - to amplify an AC wave by setting the transistor at a certain operating point.

Suppose we have an AC input signal with maximal value 1Vpp (+-1V). Now, to avoid clipping we need to set the VB at around 1.8V - 2V in order to prevent VB dropping below ~0.7V. We will not achieve this WITHOUT RE resistor.

In other words, circuit I presented in the first post may serve ONLY for really small signals (maybe dozens of mV). In case of bigger amplitude the voltage divider will do no good since it simply can't force Base Voltage high enough to cover the whole range of an input signal - it always be (the VB) at around 0.7V and all we will get clipped output.

Not the answer you're looking for? Browse other questions tagged transistors npn bias common-emitter biasing or ask your own question.