OP Amps, by circuit design, are linear ONLY when the output is not saturated which means if the input differential is >>0 there is zero linear gain. ( ie no virtual ground, Vin NOT =0 ).

Positive Feedback is also called a latching comparator with hysteresis, designed to ignore input pk=pk noise and have only one output transition until signal change exceeds hysteresis levels.

Comparators also have linear gain like logic but only "during" the transition, then Zero gain at any logic level "0,1" after that. It is this clipped level that gives logic such a high SNR and low Error rate. The logic levels are defined so that with good layout and decoupling these "grey area" noise margins ensure very high SNR and thus near zero errors. This can be computed based on thermal noise but often inductive and crosstalk noise is the real threat to logic errors not Thermal random noise..

Positive feedback seeks to maximize the voltage difference between Vin- and Vin+ therefore it cannot produce a virtual ground.

Negative feedback seeks to minimize the voltage difference between Vin- and Vin+ therefore it can produce a virtual ground.

In the circuit of an op-amp non-inverting comparator (Schmitt trigger), a virtual ground appears during the transition, in the moment when Vout/Vin = -R2/R1. 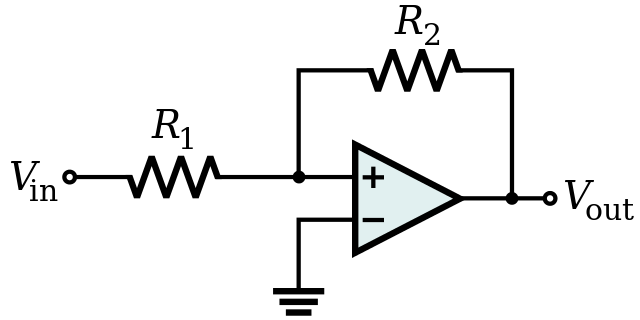