They run on 20V, have a 7.5W power rating and need alternate polarity applied to switch between the 'on' and 'off' states.

I tried using a Raspberry Pi with 14 x L298N Dual H-Bridge Driver Modules to run the electromagnets and it usually works, but there's a lot of wiring involved with the H-Bridge modules, making fault-finding tricky, and I've had a few fail on me already.

Is there a better/tidier way of controlling them that I haven't come across? I've done research online but can only really find these H-Bridge modules as being the answer.

Another possibility would be to use the DMOS power shift registers in TI's TPIC series. This shows active pullups on each output. You could use resistors but that would come with other issues. 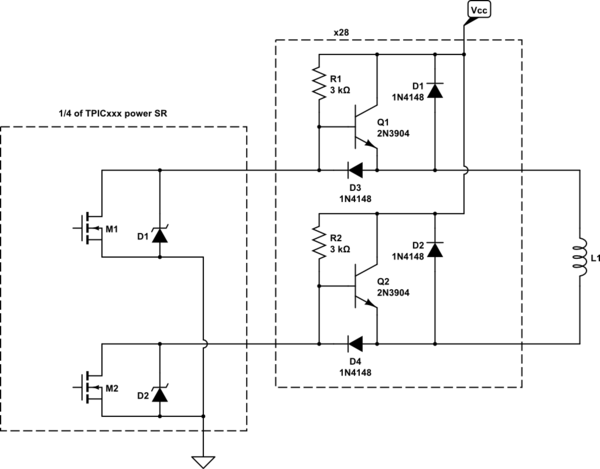 7 is the minimum number of shift registers required, but it might be better to use 8 and then each digit would be identical.

You have 28 bipolar electromagnets so it's difficult to use a matrix arrangement unless they will reliably not flip with 1/2 voltage. Diode isolation won't work. I suppose you could consider putting a bipolar TVS in series with each coil, and boosting the drive voltage (already pretty high for the driver though). Targeted coil sees +/-(Vs - Vz), non-targeted coils see +/-(Vs - Vz)/2.

If they won't do that you actually need to control 56 logic states at the driver inputs. So maybe you could flip one at a time and common one of them up (29 wires), but I would think a shift-register would be superior. 74HC595 x 7 pieces. Needs 3 GPIO (or fewer, with tricks) from the RPi. You can use RS-485 with terminated twisted pairs or RS-232 (low speed) drivers/receivers for the lines if you want the display remote. CAT-5 or similar cable could be used. 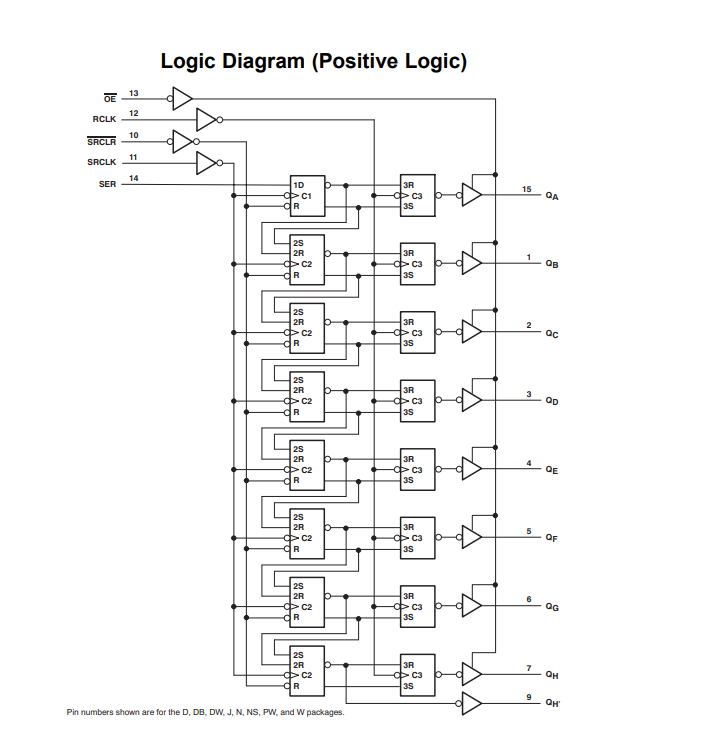 It can be done with a diode matrix in a similar fashion to what is done with ferrite core memories as they also require bipolar operation.

Although core memories extend the matrix drive by exploiting the 1/2 current drive with coincidence selection of the X and Y axes this could not be exploited here. Selected coils would receive full drive, unselected coils zero drive.

Arrange the 28 coils as a 7 by 4 matrix. With each segment using a bipolar drive (using for example 4 x L298N devices). The other axis would require separate drive high and drive low outputs that could also be driven by 4 x L298 devices for a total of 8 devices rather than 14. It would however need 64 diodes to avoid cross-driving of unselected coils.

It would be similar to this: (taken from Magnetic Memory Core System). The display drive coils would replace the individual memory cores. 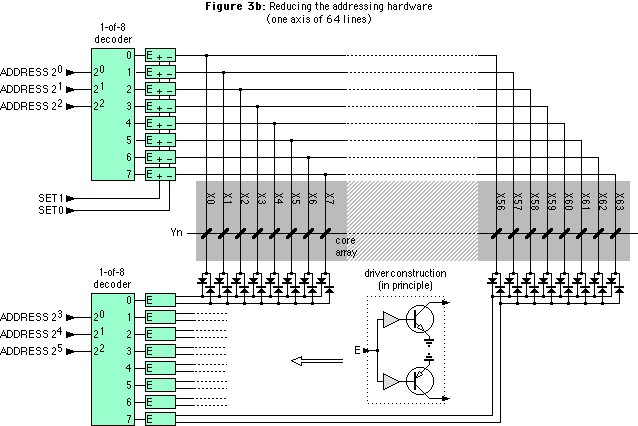 The value of C1 would need to be calculated and tested.

It's up to you whether or not to use the diodes. If the relays are beefy relative to the current being drawn then you might not need them.

I tried using a Raspberry Pi with 14 x L298N Dual H-Bridge Driver Modules to run the electromagnets and it usually works, but there's a lot of wiring involved with the H-Bridge modules, making fault-finding tricky, and I've had a few fail on me already.

If you used lots of small pcb modules with L298's on them then I guess current pulses in ground wires are going to cause a lot of ground bounce, that is the GND voltage on each module is going to spike pretty bad when they switch. Problem is, no current is flowing in the digital signal wires so you can end up in a situation where the Raspberry Pi outputs 0V, and the ground on your L298 module spikes up a few volts, and it ends up with a negative input voltage (relative to its local GND) which could fry it since its maximum rating for input voltage is only -0.3V when going negative.

Also L298 does not include freewheeling diodes, this means you have to add them to drive inductive loads as per datasheet application schematic. Do your modules include these diodes or not? Each module also requires an electrolytic supply decoupling cap if the supply wires are long.

So the solution using modules is quite a mess. Why not make a nice pcb?

Now, there's someone on the internet who already did a project like that and published schematics...

This is similar to the schematic in Kevin White's answer with multiplexing. Each coil needs a dual diode, which might be already included into the digit assembly or not.

No need for H-bridges, you can use ULN2803A and its high-side equivalent MIC2981 for driving both polarities.

Now, it may not be cost-effective to multiplex your digits. If the digits are big enough that the four do not fit on the cheap 10x10cm PCB format from the usual Chinese internet suppliers, and you need a larger PCB... and since you get five PCBs for the price of one... then it will be cheaper to make one PCB per digit. In this case I'd just put one MIC2981 and one ULN2803A per board, with the shift registers or I2C IO expanders to drive them, and supply decoupling caps.

Not the answer you're looking for? Browse other questions tagged arduino raspberry-pi h-bridge electromagnetic flip-dot or ask your own question.

7
What is the purpose of diodes in flip-dot displays?