I'm trying do design a mini-PCB, replacable half-bridge for motor control applications. The primary application is to use it with my modular inverter/BLDC/BDC controller. The controller design assumes 6 signals going to the bridge: GND, OUT, Low Side EN (optional), PWM, Gate Drive V (12V) and High Voltage (up to 60-70V DC), plus additional connectors for high-current HV and GND (up to several 10s of Amps).

The initial design was made around MIC4102YM, thus the LSEN and only one PWM: 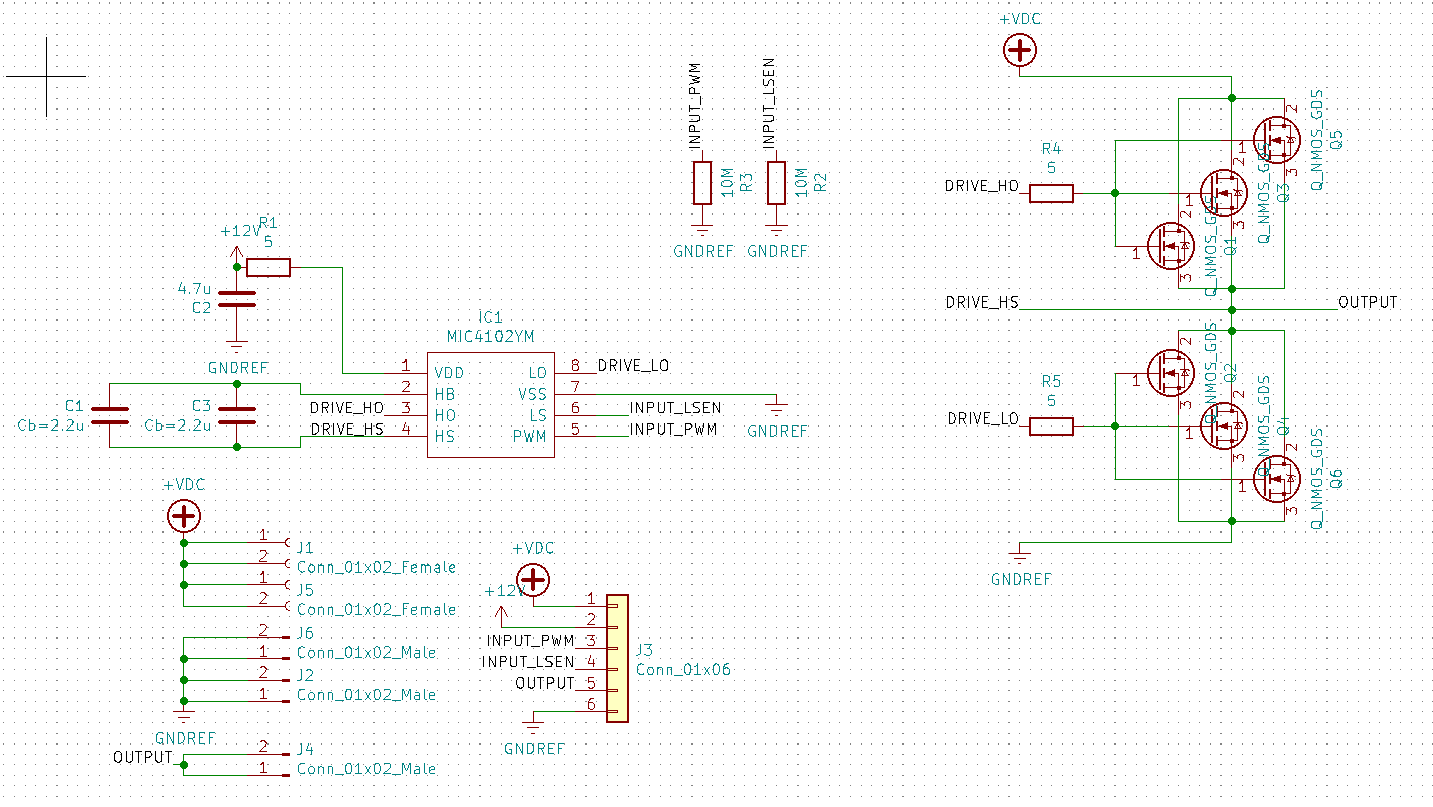 During tests with real hardware, either the MICs or the 5 ohm resistors kept blowing up, even with rather low "HV" of 12V. I thus replaced MIC4102YM with MIC4605-2YM (replaces LSEN with NC) and R1 with a 0.1A 10V linear regulator (78L10). Additionally, I've added another small capacitor between the regulator's GND and OUT legs. I also soldered only 2 out of 6 possible MOSFETs in case my problems were caused by too much gate charge. The MOSFETs are IPD60N10S4L-12.

This time, the tests with 12V input passed flawlessly. The PWM signal was at 10kHz with duty cycle between 0 and 99%. However, when tested with higher voltage (about 50V), "something" blew up and I must say I'm quite out of ideas as to why. The regulator and the resistors seem to be OK, but when testing with 12V again, I'm getting only ~0.5V gate voltage on the high side. The current drawn also seems to be higher than it should, as when PWM is pulled high, the voltage on the OUT leg drops to about 4-5V.

I'm currently ready to re-design the mini-board, but I'm not even sure what went wrong this time. Previously I could blame currents too high for the driver, but it doesn't seem to be the case this time (as it was working just fine with lower voltage on the driven side). Am I missing some crucial filters/safety features?

P.S. I'm open to suggestions regarding using other parts or more/less integrated solutions, as long as they can handle >100A peaks with 60V DC. 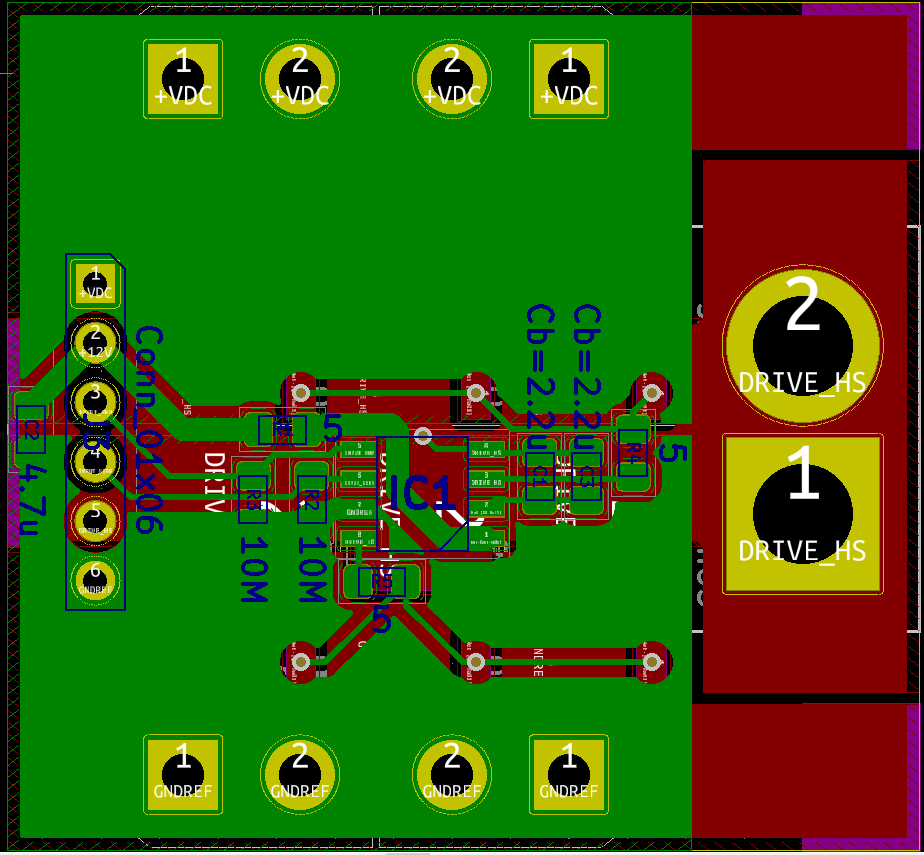 On your layout the decoupling cap (finger-painted red) is very far away from the chip, there is a 5R resistor in series (purple) and the current loop area (highlighted in yellow) is quite large. 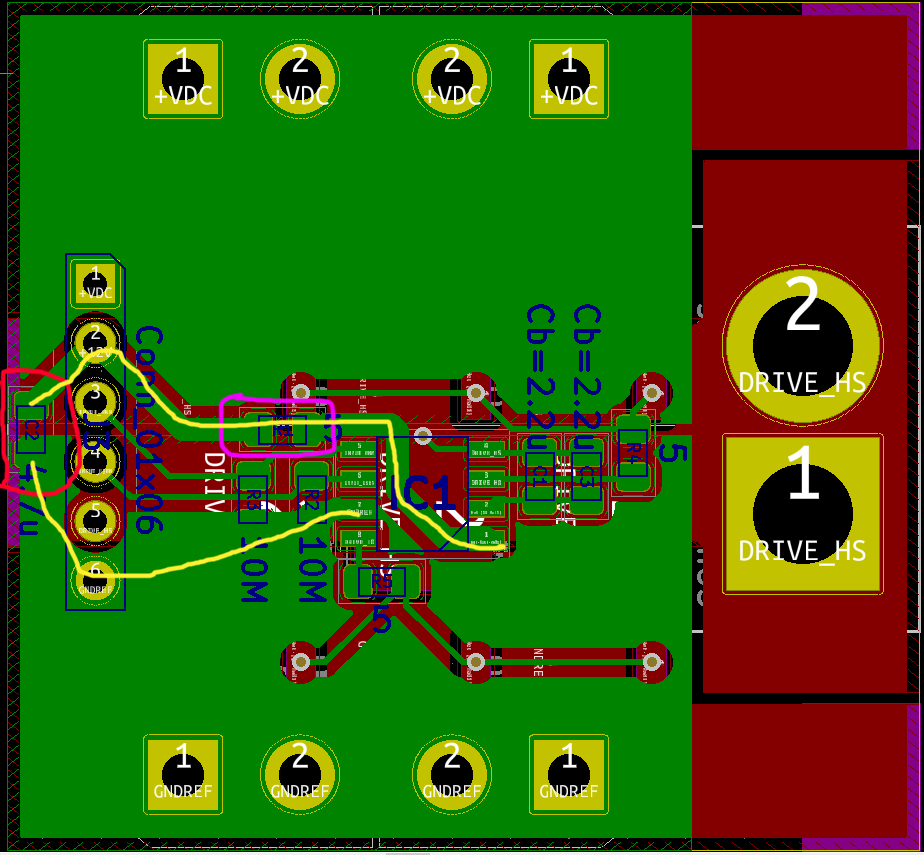 This large loop area adds inductance to the power supply impedance as seen from the chip. Wet finger in the wind, about 10-20 nH. With a di/dt around 1A per 1-2ns and \$ e=L di/dt \$ plus the 5R resistor this means power supply voltage will collapse when the chip pulls high transient from it. I don't know what it will do, maybe it will slow down or latch up, but it's probably not what you want.

A significant part of the datasheet is about high speed layout/decoupling stuff, and they really insist:

So you have to re-read all this, and study the recommended layout from the datasheet: 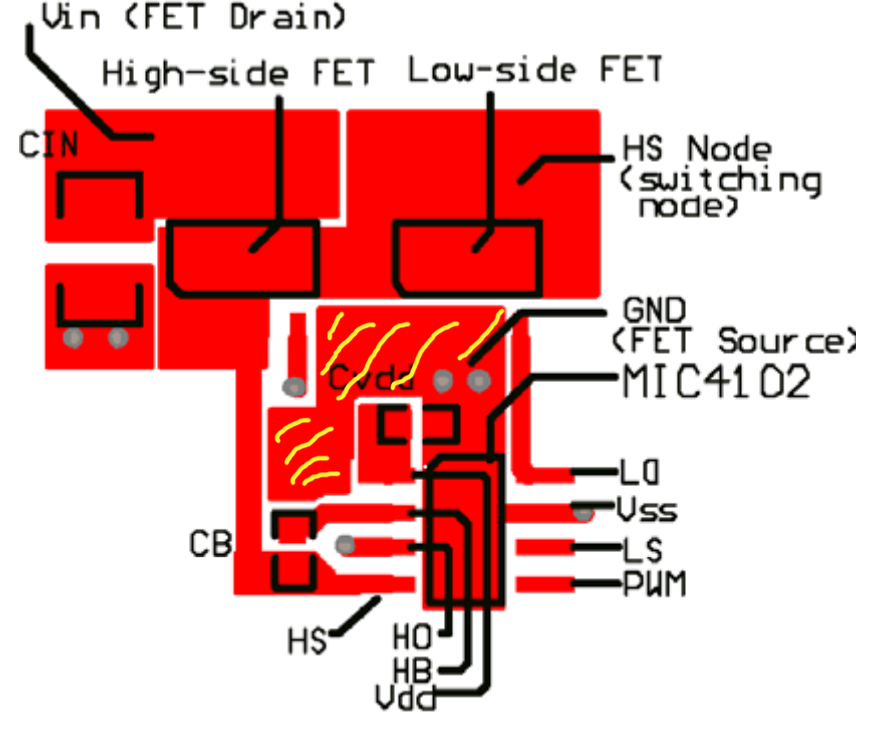 Notice CVDD is placed very close to the chip with fat traces to lower inductance. CB is also very close.

Personally I'd remove the useless portions of the copper pour (highlighted in yellow) and route HO trace under CB instead of using a via, which would allow moving CB even closer to the chip. I'd also add more ground vias to the ground plane on layer 2.

Most likely the reason why it worked better with the 3-terminal regulator was that you soldered a cap on the output of the regulator, and that cap ended up much closer to the chip than the original cap !

You need a separate gate resistor per FET. This adds real impedance (ie, the opposite of imaginary or reactive) into each gate and prevents them from oscillating. Without resistors, each gate is a capacitor and traces between the gates are inductors. This makes a LC tank and it can ring.

You need a ground plane, and a lot more decoupling on the high voltage supply than in the original schematic, which has no capacitors at all. If you have an inductive load and you turn off the FETs, the energy stored in the inductor will be dumped in the high voltage rail. If this has high inductance in series (ie, wires) there will be a voltage spike and your FETs may avalanche or just die.

Also if you cool the FETs with a heat sink pressed on top of them, the heat will have to flow through the plastic package, which has really bad thermal conductivity. TO220 FETs are much easier to cool.

If you use a low switching frequency (10kHz) conduction losses via RdsON will dominate over switching losses, so I'd recommend using TO220 FETs with lower RdsON and higher Qg. TO220 has higher inductance so it can't switch as fast as SMD FETs but... this is not important at 10kHz.

I had a lot of problems with that driver. After securing it in the following way, the device started to work properly:

I hope that these tips will help.

During tests with real hardware, either the MICs or the 5 ohm resistors kept blowing up

This is not surprising, since the 5 Ω resistor should not be there. MIC4102 datasheet says:-

Current in the low-side gate driver flows from C VDD through the internal driver, into the MOSFET gate...

The VDD and HB bypass capacitors must be placed close to the supply and ground pins.

A couple of other things to note:-

Additionally the GND pin can have enormous swings above and below Ground. Unless the ESD structures are specially designed (i.e. not just simple diodes), the ESD diodes will inject massive currents back into the pulse-source (your MCU).

Read the Driver datasheet carefully, looking for phrases such as Vin_tolerant of negative swings to -5 volts.

Its your job to manage these GND pin excursions.

Not the answer you're looking for? Browse other questions tagged h-bridge mosfet-driver bridge motordriver or ask your own question.

9
Why have my MOSFET drivers blown in this H-Bridge?
2
High Power H-Bridge with IR2125 Drivers Problem
1
Low cost H-Bridge circuit for PWM
9
Why do my P-channel MOSFETs keep dying in this H-bridge?
0
Somethings about Infineon BTN8962
1
IR2130 BLDC controller problems
0
MOSFET drivers blowing out
1
Half H-Bridge Driver
1
H-Bridge shoot through at high voltage problem - Don't know the cause
2
Why is this H-Bridge circuit not giving me a switching output