I have a little bit of confusion on how the textbook author is determining the high frequency cutoffs for the parasitic capacitance parameters for a common emitter amplifier. This is Boylestad Electronic Devices and Circuit Theory 11th edition. 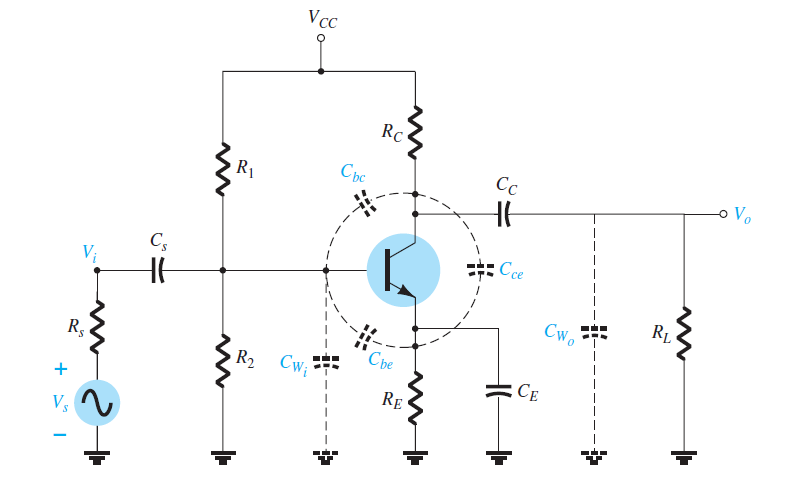 For the analysis, he treats \$ C_s\$, \$ C_c\$, and \$C_E\$ as shorts since, at these higher frequencies, these high pass-filter capacitors will be low impedance. This makes sense to me.

He ends up with two high frequency cutoff frequencies (both a low-pass filter effect) as follows:

The other cutoff frequency is determined by:

Again the miller effect is seen on the output side.

The author goes through a numerical example, and using these formulas I get the same results.

However, when I simulate this circuit in LTSpice (being sure to convert the NPN model to an "ideal" NPN, and manually insert the shown capacitors), I'm seeing that only one of the break frequencies is close (the break frequency closest to the pass-band, aka the -3dB frequency). However, the other break frequency seems to consistently off by almost exactly +1 decade (higher frequency than calculated).

I'm curious if someone can explain why this is, or indicate the correct way to calculate both cutoff frequencies.

Here is my LTSpice simulation: 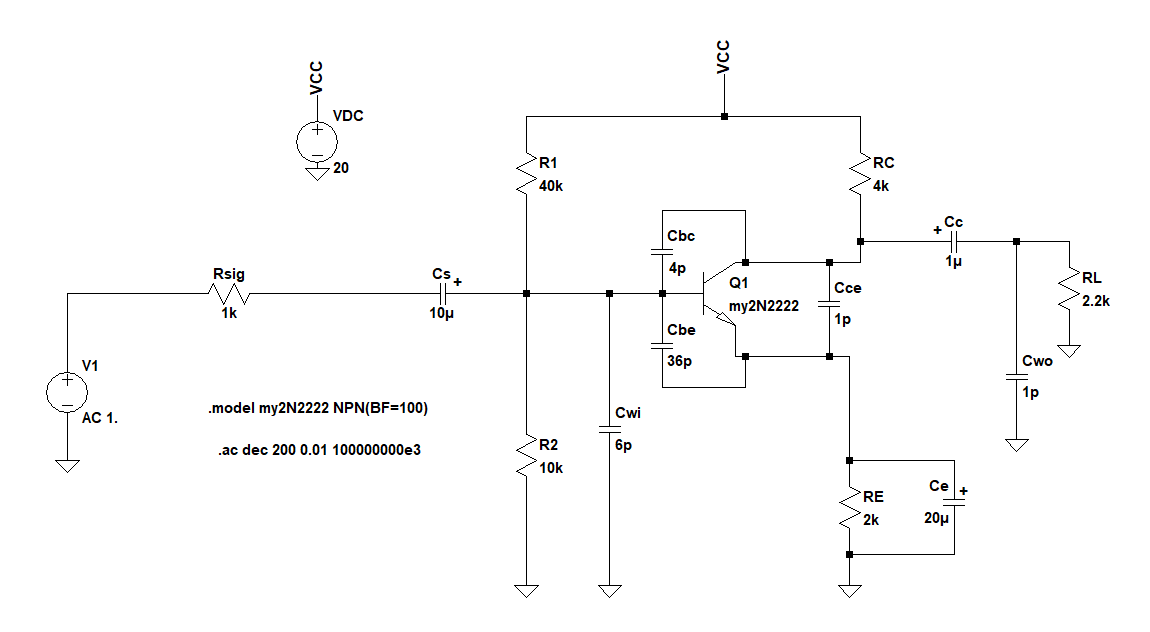 And here is the plot I'm seeing:

On the other hand, if I compute the values of Ci and Co using the equations, and reform the simulation to use these values directly: 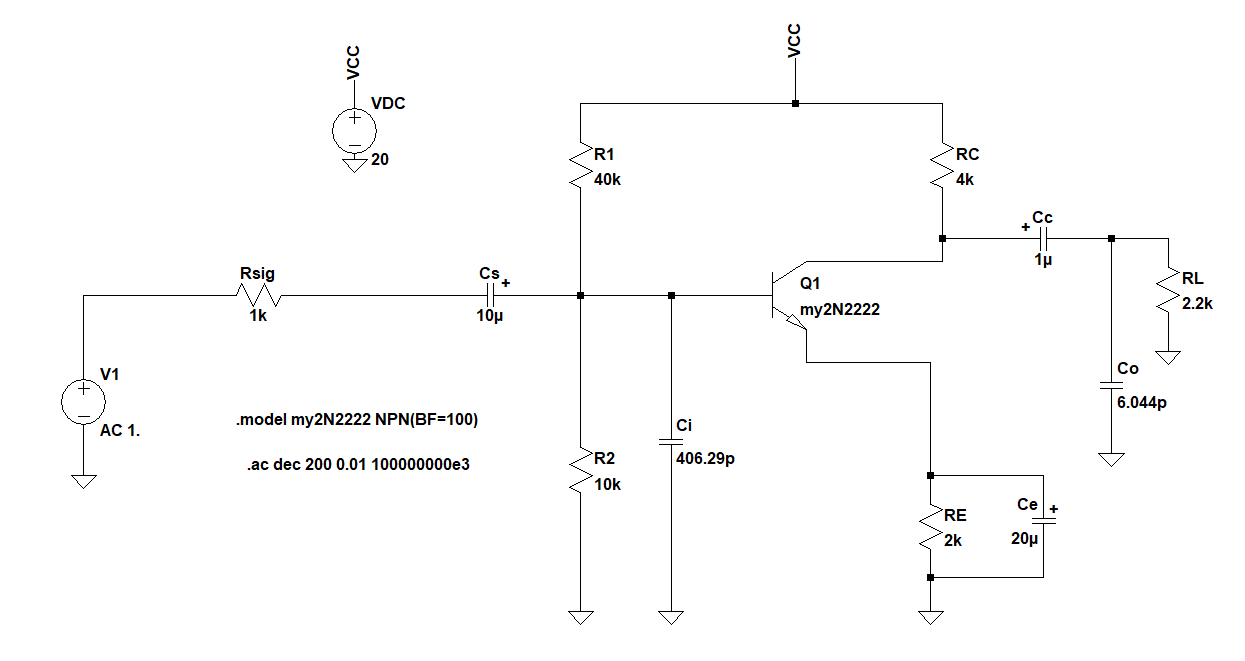 I am getting a much closer match to the textbook example (700kHz and 18MHz) :

So it's either the textbook isn't calculating the equivalent miller capacitors correctly, or the simulation isn't handling the feedback capacitor (Cbc) quite correctly.

From what I remember, the Cbe depends on the emitter current.

Thus your circuit has an incremental emitter-base small-signal resistance of about 13 ohms.

However the large emitter bypass capacitor may influence this.

I decided to simulate this amplifier in LTspice as well. 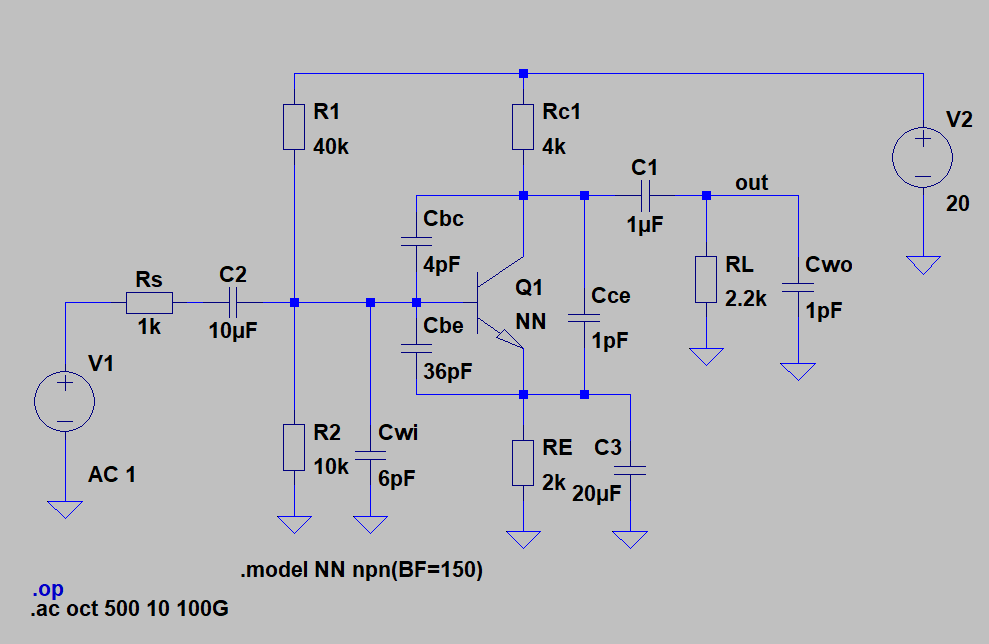 Since in AC analysis LTspice is using linearize BJT's mode. I decided to draw (in LTspice) my own small-signal model and compare the results.

And I've got exactly the same result as previously. 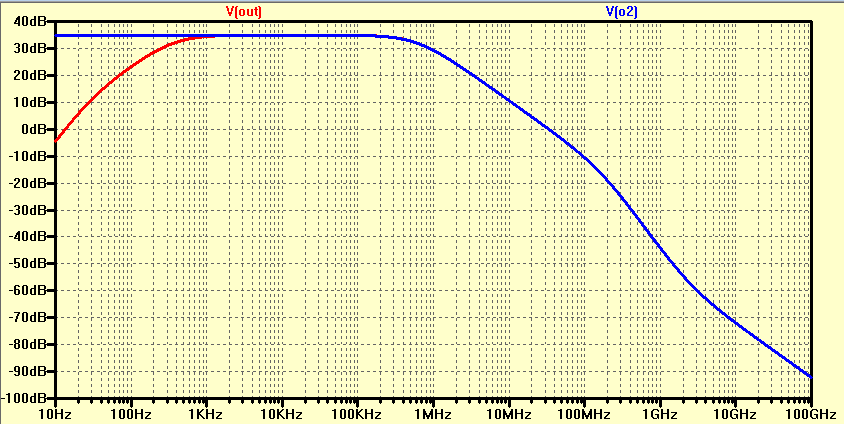 So the frequency responses are perfectly matched. Very good.

Now let us see what we get if we apply the Miller approximation to the Cbc.

And the frequency response is 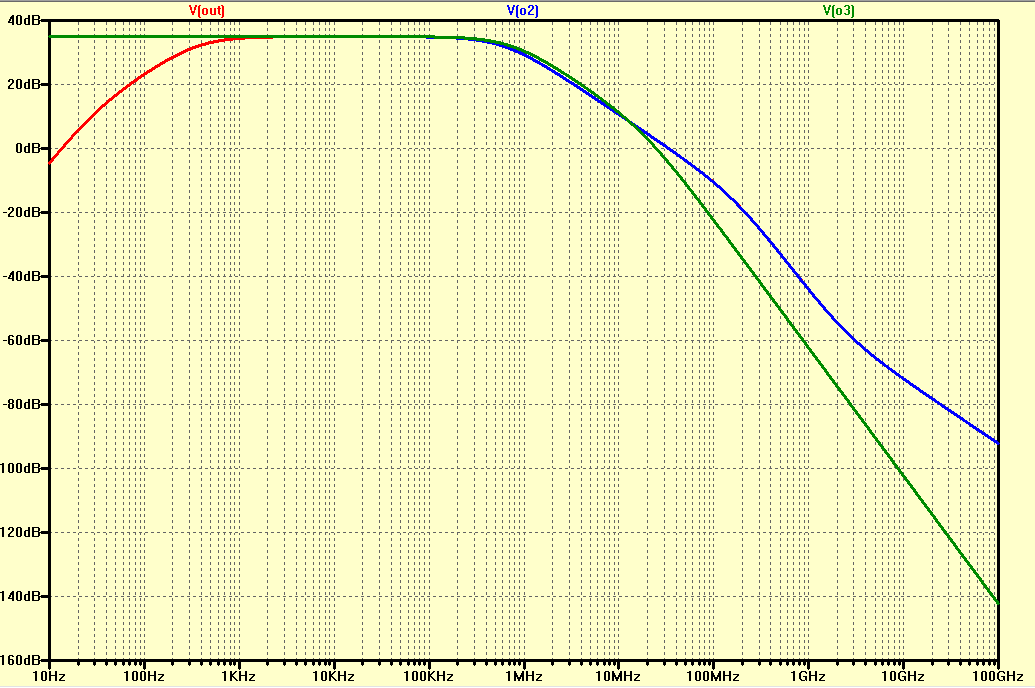 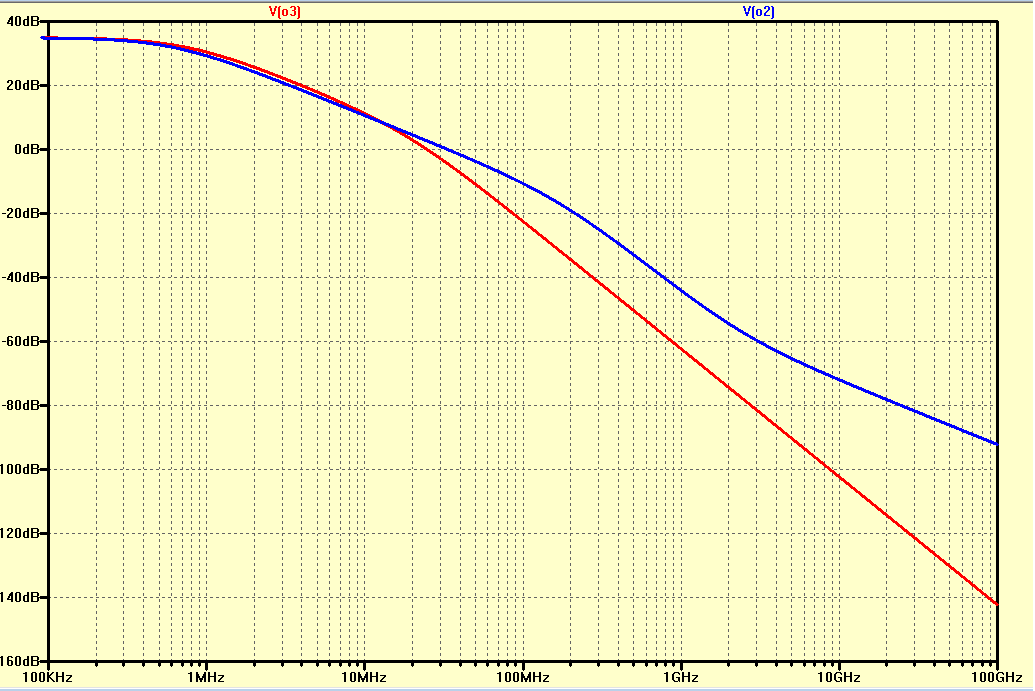 My simulator gives this result, a "little" different behavior.
So I searched different functions ( Vo versus {Vb, Vg, V2}).

For reference, here are two pictures with the use of a CCCS (linear).
Note the influence of the Ccb and Ceb capacitor.

It's almost as though the simulation is only taking into account Cwo (1pF) and ignoring Cbc and Cce in its determination of a value for Co..

Try running a simulation with Cwo removed and see if that highest frequency pole disappears altogether.

Not the answer you're looking for? Browse other questions tagged transistors active-filter or ask your own question.