I've found a problem posted as a question in one of the past exam periods. I've tried reviewing it with my peers, and we all get to different results, which makes me think my understanding is compromised. I've posted the circuit below. The problem states that Vi is a 10V triangle wave generator, the resistors are all 1KΩ and the required potential for the Zener and diode to conduct are 3V and 0.7V, respectively. We need to calculate Vo as the voltage drop output at R3, and draw the output graph. 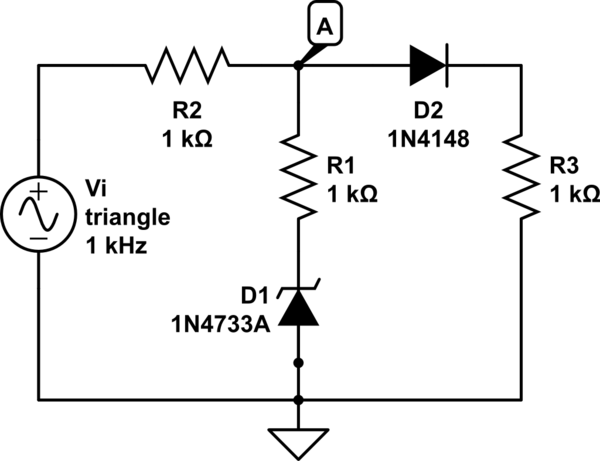 My issue lies with understanding when a diode in series actually conducts. One of my peers insists that D2, for example, conducts for Vi > 0.7V. However, I don't see how that's that case -- isn't there a voltage drop across R2? Can you help me understand the logic behind it so I can attempt my own solution? There is no similar example for me to study in the textbook.

Pardon my Senior's Moment where I got distracted on the question with 10Vpk and answered for 7Vpeak.

Except I used 2 batteries to model the simple thinking of a diode switch voltage.

This is the kind of question that makes you doubt your answer. Why would they want to do this? Just to force you to think about the threshold effects of diodes and use a simulator because the these assumptions have current requirements and the Zener currents for Vi=+10V are sub-milliamp (167uA) which means the Vz drops to 5V or even less, so your simple model is good enough to ignore the Zener for 0.1V tolerance (82 mV error with the assumptions in this circuit) so if you need more accuracy you need better Vi spec tolerances and don't use a Zener, use a band gap diode instead. (ha)

Next you think , if Point A is 4.65V and the 5.1 Zener is replaced with a battery, you have an error in this because it is now pulling up the voltage with 167 uA of current when it should be drawing about this much getting near Zener voltage. . So for brevity and 0.1V accuracy estimated, we can ignore the Zener for Vi=+10. In reality it drops C voltage by 85 mV or so .

This teaches you , that you cannot always use KVL blindly and assume the Zener is a battery voltage when expected maybe to be conducting some current .

But for this question , you can still ignore the marginal effects of the Zener on voltage at C.

The easiest way is to treat each diode, Vf or Zener voltage, Vr (or Vz @ Iz) as a 0 Ohm voltage sink with a switch when the voltage exceeds Vf or Vr and open circuit below that. 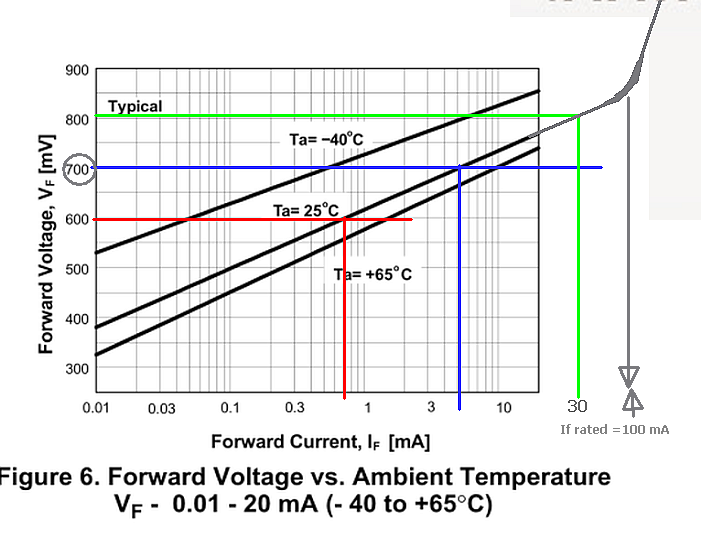 Although the reality is all diodes conduct logarithmically up to their rated continuous current as it's incremental impedance drops below the electrode bulk fixed resistance, Rs. The Power continuous rating in Watts at 85'C is inversely proportional to the diodes incremental series resistance Rs show as the curve to the right of 100mA in the graph below. It is curve on a log scale and linear slope on a linear axis

The incremental resistance, ΔRs of the diode is very high at low currents then rise to much lower resistance to be neglected for logical linear analysis. So we think of it as a voltage switch > 1mA.

It doesn't matter much whether you use a different forward threshold of Vf= 0.6, 0.65 or 0.7 as you only need to estimate the result. In the reverse, Vr has a variable large voltage rating like this part Vr=100 or a low voltage like the Zener 1N4733A = 5.1V @ 67mA . So you can think of the Zener as closed battery switch above 5.1V its reverse voltage rating but used as a positive value here. Then of course as a simple Silicon diode Vf= 0.7 V like D2.

Note that the cheap silicon diodes are also used as a disposable thermometer sensors with it's controlled NTC Negative TempCo characteristics. 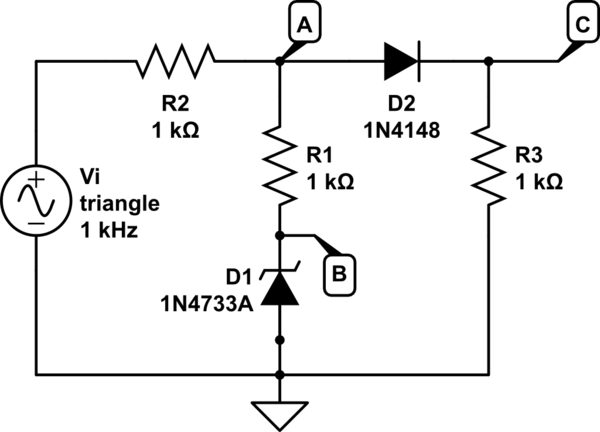 You can use 0.7 V , I might use 0.6V and it all depends on the diode current rating to determine minor variations at 1mA to 10 mA. Either is acceptable but for advanced user they want more accuracy so datasheet specs and accurate simulation with tolerances are included in the design specs. For academic purposes either value is OK.

But for real design work specs and datasheets must be followed and this simulation indicates a result of 623 mV at 3mA. 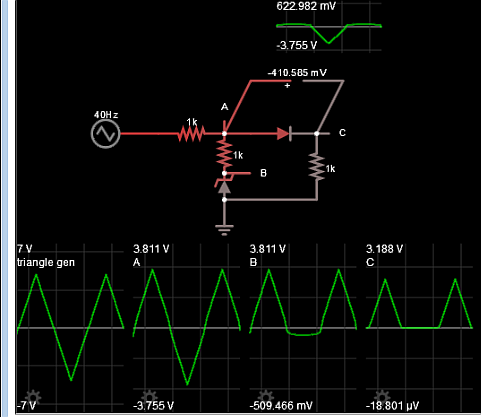 As you may be learning to analyze intuitively, the Zener circuit has no effect on the output here, as point A never reaches the Zener voltage, nor point B.

If you read this far, you deserve to playing with the interactive simulation in your browser.

I began to prepare this answer with some hesitation. Looking at the attractive (and interactive) colorful Falstad simulation and detailed explanations in the subtleties of an indisputably great professional, I wondered, "Is it possible to counteract all this with a simple human explanation based on intuition and common sense... and illustrated with hand-drawn illustrations?"

And I found the answer. Yes, it is possible... but not to counter it but rather to supplement it. This will result in an alloy of logic and intuition, reason and imagination, professionalism and teaching enthusiasm... from which everyone will benefit.

Of course, our main goal is to help (not solve) the OP's problem with some guidance to find a solution. I have convinced myself that the best way to do this is to show how we ourselves can come to a decision in several possible ways. Thus, we will show some universal comprehension techniques that OP may apply in the future to other unfamiliar circuits.

1. What is a diode? First, we need to come up with a functional idea of the diode as an element.

Voltage source. The main feature of a diode is that at a certain voltage applied to it, it begins to keep it (relatively) constant. So diodes can act as voltage stabilizers. Thus they resemble voltage sources and this led to the idea that diodes can be modeled (emulated) by equivalent voltage sources.

The problem is that they are not sources since they do not "produce" energy but rather consume it... they are passive elements like resistors. Unlike sources, their IV curves necessarily pass through the origin of the coordinate system, which means that when there is no voltage there is no current. So, if we blindly replace them by voltage sources, strange problems can appear in circuits which is very well illustrated in the @Tony Stewart's simulation.

Voltage source + switch. So, to fully imitate a (Zener) diode, you can connect a switch in series with the voltage source. An ordinary diode can act as such a switch. An example of such a 5.7 V "Zener diode" can be a protecting 0.7 V diode connected between some logic gate input (anode) and the +5 V power supply (cathode). When the input voltage exceeds 5.7 V, this "composed Zener diode" turns on and fixes the input voltage at 5.7 V (i.e., it acts as a diode clipper or limiter).

Dynamic resistor. The most accurate functional equivalent of a diode is a self-varying (dynamic) resistor that changes its resistance in the opposite direction to the current variations. Thus, according to Ohm's law, the voltage depends both on the current and resistance... and stays constant. The diode behaves as a threshold element (mentioned by @Tony Stewart) that behaves as a short connection (a piece of wire) when the threshold is reached.

2. Structure. After we have developed a functional idea of the diode as an element, let's see what diodes D1 and D2 do in the OP's circuit. At first glance, it resembles two cascaded dynamic voltage dividers. The first is composed by R2 as an upper part and the network R1-D1 as a lower part. The second divider consists of D2 (upper part) and R3 (lower part). The overal gain and accordingly, the OP's transfer graph needed, depends on the state of D1 and D2.

3. Operation. AC supplied diode circuits have different behavior during the positive and negative half-wave. That is why I have drawn two different pictures (the second one is a mirrored copy of the first). The pictures of voltage distribution and current paths are captured at times when the input voltage reaches the minimum and maximum values (i.e., these are instantaneous values). Note the lenghth of voltage bars (in red) is not exactly proportional to voltage values.

Positive half-wave. When the input voltage begins increasing above zero, both diodes are off. Both VA and VB follow VIN; VR3 (out) is zero. At 0.7 V D2 turns on and begins shifting down VA with 0.7 V (R3 "pulls down" point A). The transfer curve is linear with a ratio of K = 1/2 (determined by the voltage divider R2-R3). When VA approaches VZ = 3 V, the Zener diode D1 turns on and begins "pulling down" point B and, more lightly, point A. The curve decreases its slope - K = 1/3 (now determined by the voltage divider R2-R1||R3). So the circuit behaves as a "dynamic voltage divider" that changes its transfer ratio at some moment. It resembles diode functional converters (e.g., converting triangle to sine wave). 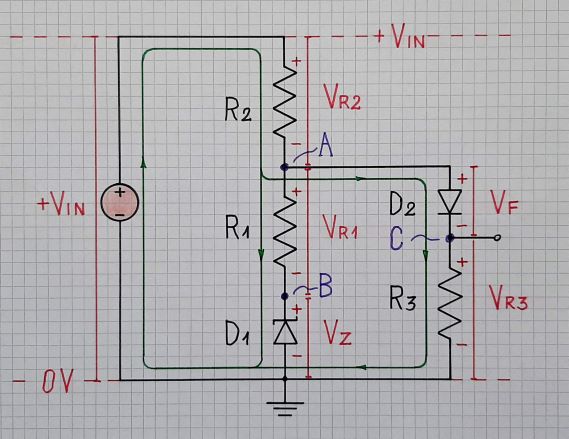 Negative half-wave. When the input voltage begins decreasing below zero, VB will be shifted down (under ground) with 0.7 V (across the Zener diode D1) and the curve slope will be determined by the R1-R2 voltage divider (K = 1/2)... and will be linear during the whole time. D2 will not conduct, so there is no output voltage at point C. 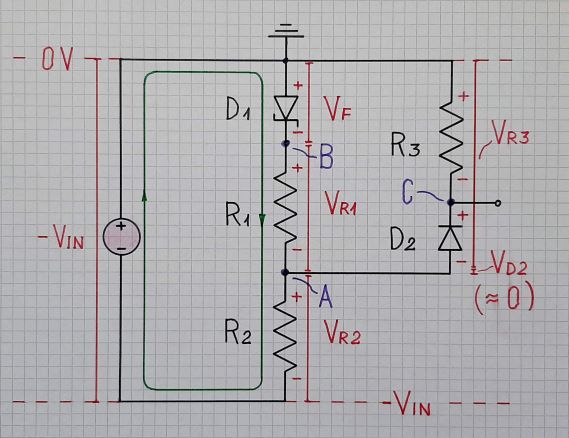 I think, after all these explanations, OP (and his/her peers) should be able to draw the transfer curve... or the output voltage in time.

Not the answer you're looking for? Browse other questions tagged diodes signal zener or ask your own question.

3
Diode circuit analysis using ideal diodes exam problem
2
what happens with diode voltage drop when connected directly to constant voltage supply?
0
What is the difference between rectifier/signal diode and zener diode?
1
Diode (Iterative analysis) with exponential model
1
Op-amp with zener diode
2
Thévenin's Theorem Example
2
What is meant when a diode is said to be forward biased?
10
Usage of General Purpose Diode in Series with Schottky Diode in HP 3312A