2) What is the use of connecting the capacitors in an "X" like fashion in between the inductors?

How does the LC network prevent any damage of the switch during the short circuit stage?

I prefer this schematic for a Z source converter because it contains the all-important diode (red circle): - 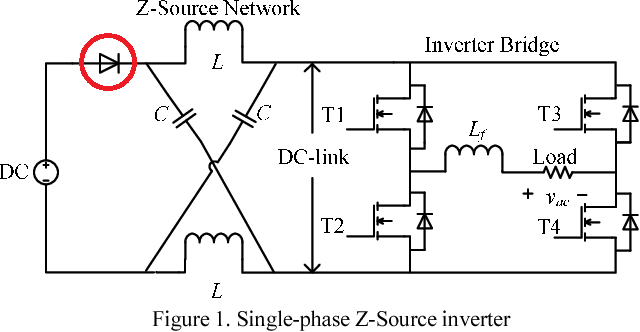 That diode is important because without it, when T1 / T2 and/or T3 / T4 turn-on to create the shoot-through condition, energy stored in the capacitors would be lost instead of being "allowed" to produce double the supply voltage. Maybe it might be easier to see it if re-drawn: - 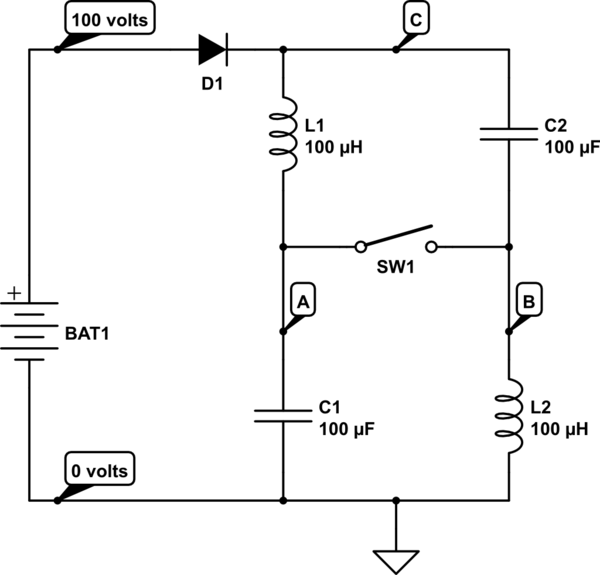 When the switch closes (representing the shoot-through condition) the capacitors are placed in series and so node C suddenly rises to 200 volts and reverse biases the diode. This means that the applied input voltage to the inductors is twice as high. As shoot-through progresses the current ramps up as per a normal booster circuit but with potentially twice the input voltage.

What is the use of connecting the capacitors in an "X" like fashion in between the inductors?

Hopefully, with the redrawn diagram you should be able to see that now.

Not the answer you're looking for? Browse other questions tagged capacitor inductor inverter passive-networks network or ask your own question.

1
Release of energy stored in Inductor and Capacitor
0
Initial Conditions and current for an RLC circuit
0
Steady-State DC Analysis: Inductors and voltage sources
1
In this parallel RLC circuit, why is there no current flowing through the ideal RLC elements until after the switch is open?
1
First order RL circuit analysis problem
0
Inverter Output Signal (Filter Input Signal) becomes distorted when LC Low pass filter is connected. Need Help please
1
Can Inductor force abrupt current change through another inductor?
0
MC34063 inverter stops switchng at low current and burns out through inductor
0
I'm trying to build an inverter circuit in LTspice using voltage controlled switches
1
Circuit for simulation