Current Sensing with Op-Amp, do I need a shunt resistor in series with the load on the output?

Hi I am building a circuit to measure current draw from a load, I opted for a voltage follower with a transistor and a shunt in between, The transistor is needed to allow higher currents to flow through the load, here is my schematic: 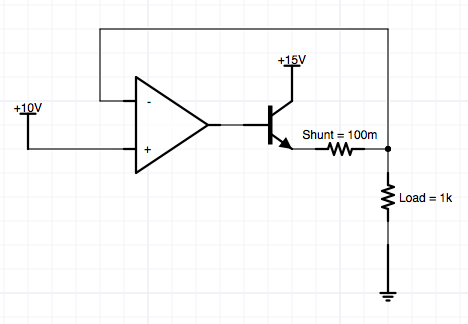 What I am not really sure is if I need to place a resistor between the Op-Amp Output and the base of the BJT, I think that the Op-Amp would compensate by itself, but idk.

So the actual question is if a resistor needed between the base of the BJT and the Op-Amp output.

This is the second stage for a DC Variable Voltage source.

This stage has three purposes:

-The first, to keep the voltage across the load equal to the input voltage.

-The third to increase me maximum current that can be supplied to the load. Since the first stage is 1.5 Amps max, I would like to make this at least 3 Amp max

What it will do is basically waste power, since the opamp will do its best to modify it's output to make the negative terminal to the postive one. So you'll still get 10V on the load, there will still be a voltage drop on the 100mΩ resistor and a slight amount of power wasted.

So you don't need it. One thing you might need is a resistor between the opamp and the transistor because you might exceed the output current on the opamp. Or if the opamp output can source a lot of current, you might exceed Ib on the transistor, so make sure neither of those situations doesn't occur. Another problem with these circuits is they can become unstable at high frequencies, especially if there is a cable adding inductance on the load, so watch out for that.

A useful thing to do with this circuit and a variable load is to use the shunt resistor for current measurement.

Not the answer you're looking for? Browse other questions tagged operational-amplifier bjt current-sensing negative-feedback or ask your own question.

5
Correct Way to Limit Op Amp Output Current
2
Bipolar transistor as a switch
0
Amplify Shunt Resistor Voltage to an Arduino Using an Op-Amp
0
Current Sensing with Non-Inverting Amplifier
1
High-side current sensing with a rail-bound instrumentation amplifier?
1
In op-amp, how do they remove Quiescent votage (bias voltage of a bjt) from the output?
0
Sensing Voltage and Current of an Adjustable Voltage Source
2
Measuring AC Current at High Voltages (up to 600VAC)
1
Current sense op-amp with integrated shunt vs expensive resistor
0
Op Amp High Side Current Sensing