Can I somehow control a PSU-powered fan using a 4-pin fan output on the motherboard? [duplicate]

Not considering the wattage of the fan, I originally plugged it into a (known working) fan terminal but it of course would not turn (and the BIOS correctly reported the RPM as 0). Connecting it directly to the PSU is simple enough, but this would result in it turning at full speed at all times.

I am curious if there is a "DIY" way that I can supply the fan with power from the PSU and control how much actually reaches the fan using the output of the motherboard (using something like an optoisolator to keep the motherboard safe).

Is there a product or combination of parts that will do this? I originally asked this on Super User, but it was deemed more appropriate here due to the involvement of DIY electronics.

EDIT: The 4-pin connectors on the motherboard are indeed keyed to force correct connection of 3-pin plugs.

The BIOS includes a Fan interface that allows you to plot desired RPM vs temperature. Each fan output can individually be set to either PWM or DC voltage level control. The motherboard auto-detects what is plugged in (4 or 3 wire) and selects the appropriate setting, but it can be changed manually if desired.

The fan was not purchased through DigiKey, and came terminated with a keyed 3-hole connector (F). It also shipped with a 2-wire (but 4-wide) molex connector (M), unterminated on the opposite end.

I did not see anything about 3-wire fan support on that page, but if user manual says so then you don't need anything else but correct wiring on 3-pin plug. The PWM control pin will not be used, and the taho output from 3-pin fan is compatible with tach input on 4-pin fan connector. Furthermore, 4-pin connector is usually keyed in a way that forces correct connection of 3-pin plug.

Note, that if motherboard does indeed support both types of fans then most likely you have to configure fan type somewhere in BIOS.

There is nothing "of course" about this. The fan should have been working at full speed all the time and motherboard should have been able to read its RPM. That's, of course, if it is configured for 4-pin.

From the link to a fan it seems it comes without a connector. So, check your wiring first.

If your problem turns out to be insufficient motherboard output wattage, then one DIY solution would be to add OpAmp in voltage follower configuration, supplied directly from PCU and controlled by voltage output from motherboard connector. Depending on motherboard driver's design you might need to add a load resistor on the control line to simulate fan motor.

Not with a 3-wire fan with a tachometer (TACH) output like the delta fan, the FG signal is for speed monitoring and it outputs a signal.

One way would be to change the voltage which could be done with a variable resistor in series, but one problem with this is approach is the remaining power will be dissipated in the resistor. And with 24W you would have to be able to dissipate Watts of power in a resistor, which is not good.

A variable DC DC converter or voltage regulator might also do the job, the fan has a working voltage of 6-12V.

The best thing to do would be to get a fan with PWM control.

share|improve this answer
answered Jan 22 at 23:01 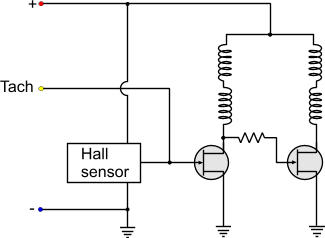 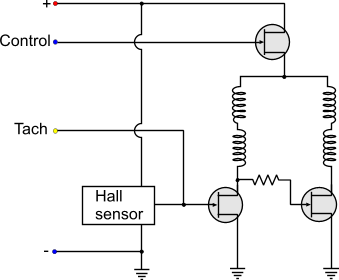 share|improve this answer
answered Jan 23 at 1:09

Not the answer you're looking for? Browse other questions tagged power-supply fan motherboard or ask your own question.

4
How can I adapt a 3-pin PC fan connector to a 4-pin connector?

2
arduino - how to read and control the speed of a 12V - four wire fan?
4
How can I adapt a 3-pin PC fan connector to a 4-pin connector?
1
Connect low-RPM motor to computer PSU
0
Use motherboard PWM to control non-PWM fans with MOSFET
0
Fan speed control - Voltage (0-5V) to PWM (0-100%) with minimum value
2
Using 12V fans with a 24V PSU
0
PWM on negative pin to positive (the common) PWM for a fan's control pin
1
4-pin PC Fan PWM control and speed monitoring
0
USB internal control to on/off a pc fan molex circuit