Are all linear regulators bad at filtering input ripple? (or really as bad as Dave suggests)?

In EEVBlog #1116, Dave discusses a method to remove power supply ripple, and goes on to show (see 5:17 to 6:15) that you cannot count on linear regulators to remove your input ripple. He gave a concrete example in the lab: at 10 kHz input ripple and MCP1700 (a CMOS LDO), as demonstrated on the 'scope, the ripple largely passes through.

While the rest of the video is meticulously explained, I feel that he present this example in a bit of a cherry-picked manner and omitted relevant details. I remember doing exactly the thing he warns against: I had a class-A headphone amplifier, which, when powered via a specific el-cheapo wall-wart at 12V, had a whistling sound on the output, caused by the switching noise of the power supply. In that occasion I lowered and cleaned the input voltage with a LM317, which completely removed the noise.

Note I'm not saying Dave is wrong - his warning is that a linear regulator, and a LDO in particular, may not solve your problems.

I have enough intuition to guess that what he talks about likely applies mostly to LDOs, since I've heard they can have stability issues and I guess the internal compensation against oscillation makes their pass element somewhat inert, so at frequencies like the 10 kHz he tests with, things can be quite bad. I don't see how they would fail the same test at 50-120 Hz, since this is a very common usage scenario which the IC designers likely thought about.

Do all linear regulators perform poorly — say, have ripple rejection less than 15dB — at some combination of frequency and load current? Assuming other conditions aren't super-bad, i.e. not talking about 125°C and/or input voltage touching the dropout zone? On a related note, is there a linear IC design, which is particularly good at rejecting input ripple all the way up to 500 kHz?

In the case of the MCP1700, Dave is certainly correct.

Here's the ripple rejection versus frequency chart from the datasheet: 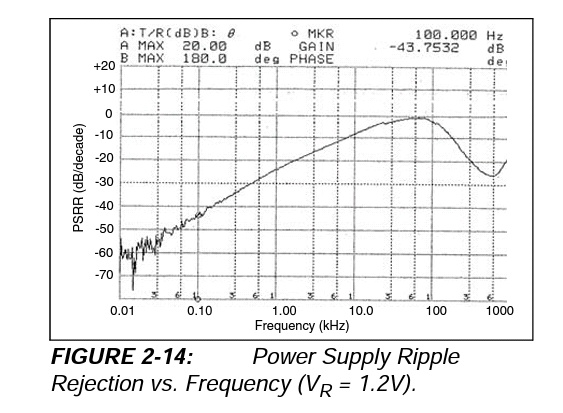 The datasheet itself claims 44dB of ripple rejection at 100Hz, which agrees with the chart.

The LM317, on the other hand, gives you better than 50dB of ripple rejection to at least 20kHz, then gets worse (though it doesn't get as bad as the MCP1700 until well over 1MHz.) 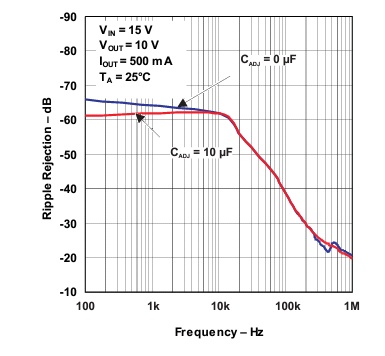 I'd conclude that just slapping in a linear regulator won't automagically fix your problems if you have ripple from a switching power supply causing interference. You need to check the datasheet of the linear regulator and see what it does given the frequency of the switching regulator.

A look at the datasheet of the LM1117 (also an LDO) also shows better than 40dB of ripple rejection to over 100kHz. 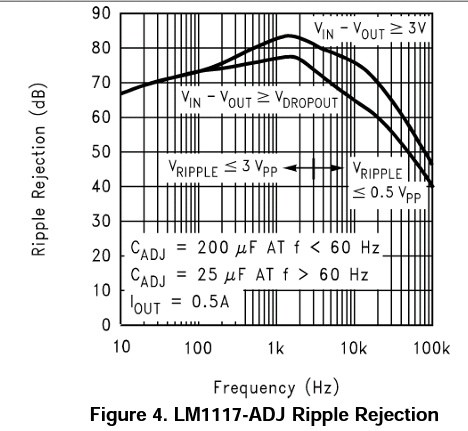 I wouldn't generalize to "LDO regulators are bad at high frequencies."

I'd just leave it at "some linear regulators are bad at high frequencies."

Dave was definitely cherry picking, but I think (I haven't watched the video) it was to make the point that you can't just pop in just any linear regulator to clean up after your switching regulator.

I've had a chance to watch the video. It is about using a capacitive multiplier to reduce ripple. The bit at the beginning is just a short introduction to explain why you might need to look for an alternative to a linear regulator to clean up ripple.

He doesn't go into any depth on why and which linear regulators might not be adequate because it is just an introduction to get to the main theme of the video.

It doesn't entirely excuse the poor performance of the MCP1700, but I think you'll generally find that very low Iq regulators tend to have much poorer high-frequency PSRR.

You would not expect an op-amp with a very low quiescent supply current (a couple uA or less) to be very useful at high frequencies, and the error amplifier in the regulator is no different (and some of the current is devoted to the reference, leaving even less for the error amplifier).

For example, the TI TPS7A05 is a 1uA Iq regulator with unusually detailed PSRR data: 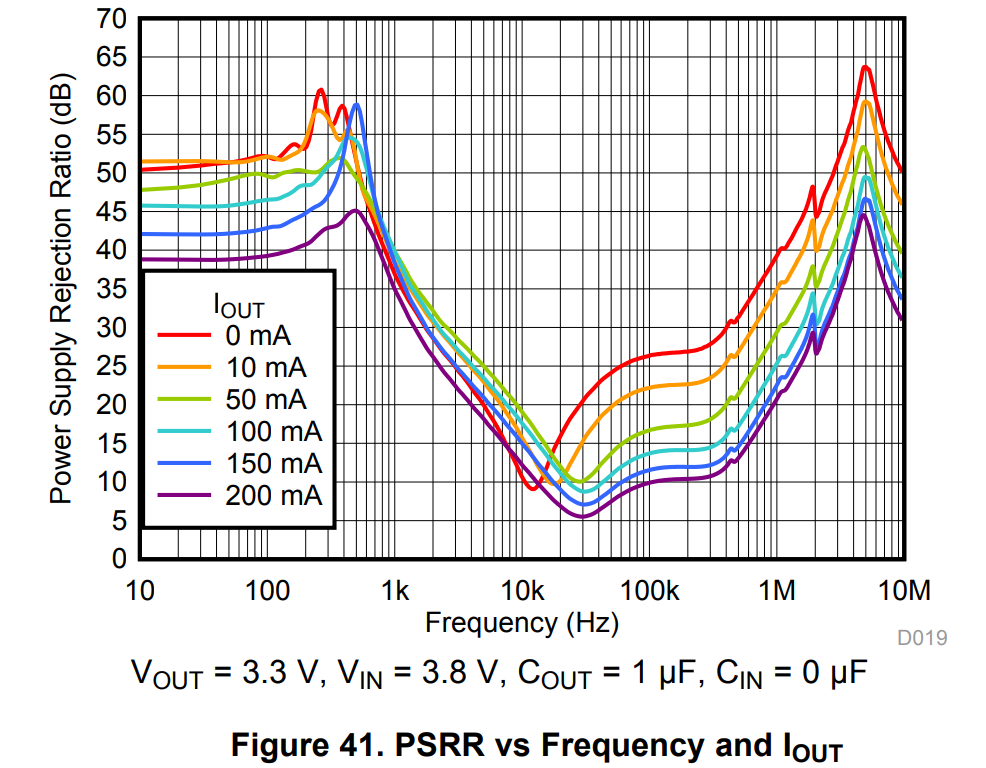 My practice is to use a large enough capacitor before the LDO to handle high frequency ripple, with a small R or L before it if necessary, and rely on the LDO to remove the low frequency variations. That means both components get used at their 'best' frequencies, and I'm not requiring either to struggle to work where they are not so well specified.

If the input ripple dips below the dropout voltage of the LDO, then that ripple will certainly find its way to the output, regardless of its ripple rejection specifications.

This is cheery picking functionality of a particular part. An ideal LDO has infinite PSRR so what is the limiting factor on real LDOs that degrades performance at high frequencies?

The second article I mention goes into great detail but essentially PSRR is determined by the voltage division ratio of the output impedance of the error amplifier and the Rds of the pass element. Think of it this way; if the circuit below was ideal the gate of the FET would be modulated instantaneously and none of the supply ripple would pass. In a real device there is an output impedance Zout is divided by the negative gain of the amplifier (on the order of 100dB) making it appear much smaller Zofb. The voltage division of this Zofb working against the Rds of the FET determines the ratio of the AC signal that we see on the output. So it is the magic of amplifiers that allows LDOs to have high PSRR ratings! 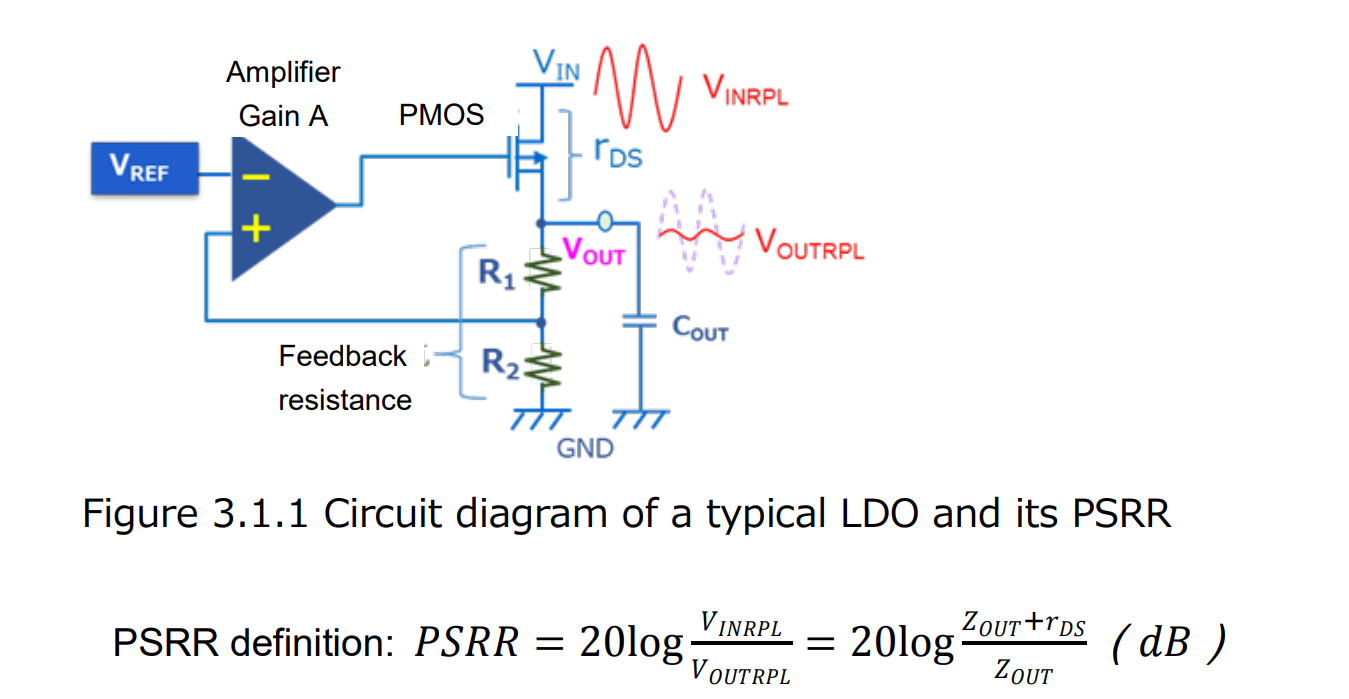 A quick skim of the linear regulator section of my Nat Semi data book turned up several ICs with 40 to 60 dB rejection above 100 KHz, so 'Dave' was cherry picking as you suspected. Just another reason to not watch videos; do real work on real circuits instead.

Not the answer you're looking for? Browse other questions tagged power-supply ldo linear-regulator ripple-current or ask your own question.