My current setup is an ESD mat and ESD wristband both connected via alligator clips to unpainted screws that are screwed into a secondary PC power supply (not mounted in a PC case.) This power supply is then connected to an outlet. Would this be a good solution to be safe from static discharge and component safety from it?

I use regular screwdrivers and some of them are from a gunsmithing set, some from an electronics set. Would these screwdrivers cause damage since they are not specified ESD safe? Wouldn’t me touching the screw drivers ground them to the same level as me?

Is this a good set up to prevent ESD damage to components?

Are ESD safe screwdrivers and tools necessary in this case?

When you say your tools are not ESD safe, do you mean they are all metal? As in all metal tweezers? Or that they have a metal working end but have plastic handles? Like screwdrivers and pliers? I would have no qualms about all metal tools since you are wearing the ESD wrist strap when you are grabbing the tool anyways.

Technically, all-metal tools aren't as safe as metal tools with dissipative handles which drain the charge in a slow and controlled manner. It mainly means that if you are charged for some reason (i.e. not wearing a strap) and you pick the tool up and touch it to a component, the charge will equalize slowly and not damage the component rather than quickly with a spark which would damage the component.

But dissipative handles on all metal tools that don't need handles like tweezers is expensive, posh, makes them hard to clean and gives them a soft component to wear out. I don't like it.

I'm going to try to explain how ESD works in general instead of answering "what if?" one-off questions for every possible scenario.

Something with a neutral charge will be defined as when something has a charge that causes it to have a voltage equal to ground. As an analog, charge, is the amount of pressurized gas in a tank.

Then you have voltage of an object (always measured relative to another object), which is basically a measure of how hard the charge is trying to push through barriers in order to equalize itself. As an analog, this is pressure of the gas in a tank.

Objects themselves can obtain a charge (and therefore an associated voltage which pushes the charge to try and equalize it) that is positive or negative with respect to ground or with respect to each other.

Or in electrical terms, just large and small capacitors and ground is an infinite capacitor which follows all the same principles as all the mumbo jumbo above. Every object is a capacitor and every object can hold a charge.

Ground will be taken as an infinite charge sink. For analogy, it is taken to be an infinite gas tank. That means that if you dump a bunch of charge into ground, it gets spread around so much that its voltage will not change. Similar to connecting a finite gas tank to an infinitely large gas tank; In the process of pressure equalization, the finite tank might change a lot or a little in pressure but the infinite gas tank will change very little (i.e. zero) since the amount of gas being moved to equalize gets spread out so much within the infinite gas tank that the pressure does not change. This is a bit pedantic since we have defined ground as our neutral, our reference, so it is always zero no matter what happens. But it's not as pedantic when talking about other objects like a large metal shelf, or small metal tweezers.

Materials are broadly divided into three categories. They all kind of look like this with R being different for different materials and with each capacitor being a localized area on the material that can hold charge: 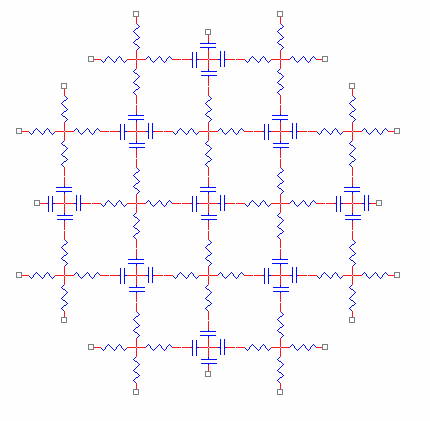 Conductive- These objects have low resistance which means charges are free to move around within a conductive material. That means that any charge at one end is free to flow through the material and out the other end. This means that they can transmit an ESD charges from one end and damage something else on the other end. But it also means that it is difficult for them to actually generate a charge via rubbing since any charge built up into them can easily escape. Not to say that you can't impose a charge into a conductor by isolating it and then touching something charged up against it which will equalize/split the charge between the two.

Since charges can move freely within a conductor a larger conductor acts like a larger capacitance relative to a smaller conductor for the purposes of the definition of "equalize" mentioned above.

Conductors are like gas tanks with an open valve.

Dissipative These objects have an intermediate resistance that still does allow charge to flow in a timely manner, but their resistance is high enough to limit the amount of current to a "safe" level. The result is that when an discharge does happen, enough voltage is dropped across the material and the current is reduced to a level that is less hazardous to the component.

And of course, since charges can move within dissipative materials in a timely manner it means that when in contact with ground (or anything else conductive or dissipative) they will equalize their charge over time, though not as quickly as a conductor will.

Dissipative materials are like a bunch of interconnected gas tanks with leaky valves.

If insulators were gas tanks, they would be like interconnected gas tanks with very slightly leaky pressure release valves that allow air to equalize very slowly but can also suddenly blow when the pressure gets too high. Since charge cannot move freely through an insulator you cannot think of an insulator as a single pressure-relief gas tank in the same way a conductor can be thought of as a single gas tank. You have to think of an insulator as a network of many very slightly leaky, small gas tanks with pressure release valves that can transfer air between each other (but with difficulty).

That is to say, that an insulator can pick up a charge and hold it locally somewhere on its surface. If it picks up too much charge locally, then the voltage gets high enough to push the stored charge around and spread it across the insulator's surface, which reduces the voltage with itself. But this takes time (similar to how charge can move through dissipative materials but more slowly than conductors), and there is also a limit since if the charge is spread out as much as it can be, and more charge is built up then the voltage just increases again. So if you build up too much charge or build up charge too quickly the voltage somewhere on the insulator will increase.

Increased voltage means the charge is pushing harder to equalize within itself, and more of our interest, into something else. So if a lot of charge is built up rapidly in a local spot in an insulator, the more readily that spot will discharge into something else. Given enough time, the charge will spread in an attempt to reduce the voltage will cause it to not so readily shock other things, but cause it to be able to shock things from areas other than where the charge was initially accumulated but with decreased readiness. It's basically like diffusion.

So hopefully this just gives you a general background to qualitatively answer all your "what if" questions. You should be able to link these together in different scenarios.

Some examples demonstrating connotations you may not have thought about:

"Won’t touching the plastic handle or any material on the screwdriver ground it?" The answer is yes, no, and kind of due to the locality of charge in an insulator.

Touching it to any material will kind of equalize the charge but only at the spot you touched it at. And it will take time (potentially a lot of time) if this other "any" material is not a conductor. Even if it was a conductor it would still take a lot of time for charge to equalize elsewhere in the plastic handle and reach the point of contact to leave the plastic handle through the conductor. Furthermore, note that that the conductor here is not necessarily grounded so you are actually charging up the conductor when equalizing charge. Both objects could still shock other objects, but with more difficulty and with reduced severity since the charge has been spread around a bit so the voltage is reduced. Then note that this conductor could also be the blade of the screw driver itself.

Other things you may not have thought about:

You already have what most manufacturing plants consider "Good enough". Keep away static generating devices. Cats, dogs, carpets,'throw-rugs', hand towels (If they are a bit moist they are static free once you touch them). Old CRT type monitor and TV sets, though most have long since been crushed for spare parts, and leaded glass.

Honestly, you seem to be on top of the essential things. Since you are electrically grounded once you touch a floating metal object it is now grounded. Be careful of plastic containers (for parts, screws, etc) that are not anti-static. A dark color usually means it is anti-static, but buy containers and bags rated as anti-static, just to be sure you cover ALL the bases. Keep conventional plastic parts bins and bags away from your static-free zone.

0
Why this Plier is advertised with conductive handle?
2
Questions about static electricity
0
Car Faraday cage
0
Is a metallic conductor within an electrostatic field necessarily subject to discharge?

2
How do I use an antistatic wrist strap and mat
1
Child-Safe setup for ESD protection environment on desk
2
ESD Anti static mat Grounding and AC volts
10
Should there really be 1 MΩ resistance between an anti-static wrist strap and a pc?
1
Questions on basic ESD safely
4
ESD - Is it safe to connect yourself to an electrical outlet?
0
Grounding Yourself When Working On Electronics
2
Install grounding cable with eyelet to outlet, no center screw
3
Can static be discharged when removing sensitive electronics from a static shielding bag while you and the bag are at the same voltage?
6
Are Nylon screws safe as PCB mounts, on PCB having a very ESD sensitive device?