Relation between diodes and laser diodes

I am currently studying Practical Electronics for Inventors, Fourth Edition, by Scherz and Monk. Chapter 2.5 Resistance, Resistivity, and Conductivity presents makes the following claim when discussing the concept of resistance:

I'm wondering what, if any, relationship there is between this explanation of diodes and the laser diode? The explanation provided is obviously very basic, but how does it, if at all, contribute to the functioning of laser diodes?

I would greatly appreciate it if people would please take the time to clarify this.

I'm wondering what, if any, relationship there is between this explanation of diodes and the laser diode?

If you read the Wikipedia page that you linked to, you'll see that a "laser diode is like an LED".

An LED (which is a kind of semiconductor junction diode) emits light because of some special quantum mechanical properties of the materials used such that when it conducts, instead of the energy dissipated by the diode drop times current generating heat, at least some of it generates photons.

A laser diode (which is a kind of LED) undergoes Light Amplification by Stimulated Emission of Radiation (LASER), because as it conducts in leaves a bunch of electrons in an excited state (called a population inversion), and when a photon smacks into such an electron the electron falls to its ground state and generates another photon in the same direction and phase as the first -- which is what the laser effect is all about.

You could possibly use a laser diode as an "ordinary" diode, but it would be unhappy. They're quite specialized devices -- but under the hood, there's a PN junction, and many of the same quantum-mechanical processes that make a plain old 1N4148 conduct current in one direction but not the other are present in a laser diode.

Bespoke Current-Voltage relationships do not provide explanations of how light emitting diodes work. It is characterization of the input / output relationship: not the lasing mechanism.

As an analogy: the relationship between my Toyota Camry's velocity (measurable output) and accelerator position (controllable input) does not explain the mechanism (Pressure-volume work) of why the vehicle moves forward.

Resistors are linear models of current produced when a voltage (battery) is applied. In contrast: Diodes are NONLINEAR voltage-current devices. This graph shows the output current as a function of the voltage across the diode (see bottom right of diagram). 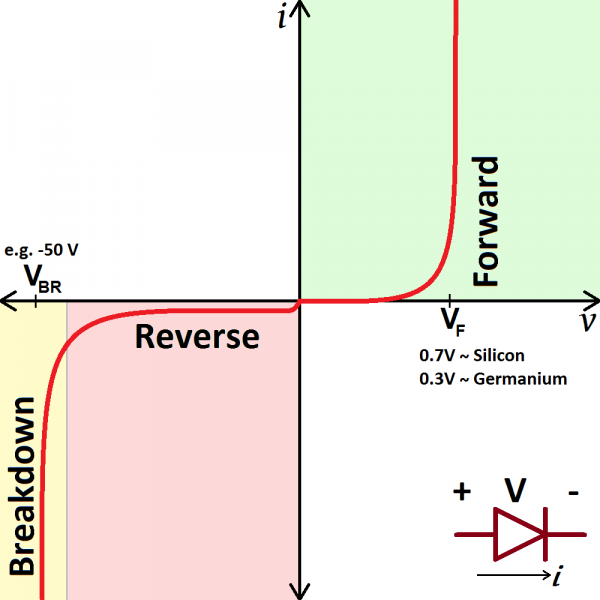 Not the answer you're looking for? Browse other questions tagged diodes ohms-law laser laser-diode or ask your own question.

4
What's the difference between a FP, gain guided and DFB laser diode?
4
High rate modulation of laser diodes
1
simulating a photo diode response- how to make use of pulsating current sources
7
What's the difference between a laser diode and ordinary LED?
2
Characteristics of a Laser Diode Below Threshold
2
General definiton of Ohm's law
0
Laser Diode Coherent OBIS
0
Current coupling in self-monitoring laser diodes
2
What does the arrow going through the battery symbol represent?
0
Is it possible to just take a normal (continuous) laser diode and pulse it? Or does this not produce the same effect as pulsed laser diodes?