What voltage are AGM battery capacity ratings supposed to be computed at?

I have an AGM battery that is rated at 12V 225Ah. Using the 50% "rule", the battery should be able to deliver 12 * 225 * 0.5 = 1350 watt hours = 1.35 KWh. However, when the battery is under load, the voltage drops to as low as 10.5V, where many power inverters are set to warn the user. I don't know what the average voltage is during a capacity test, but it slowly drops from as high as 13V (with a very light load at the beginning of the test), to around 10.5V if the load is just right such that it is heavy enough to dip the battery that much at the tail end of the load test.

So my question is, do battery manufacturers expect us to use the nominal voltage when calculating the usable capacity of that battery or the average voltage during the capacity test? I don't want to overestimate this 50% rated capacity (100% usable capacity) and overdischarge my battery. The difference is about 6.25% if I use the average voltage (around 11.25V) vs. the rated voltage (12V). For example, 11.25V (ave) * 225Ah * 50% = 1.265 KWh, not the 1.35 KWh we calculated using the 12V rating. Which is more correct? is it more correct to just use the watt hour rating by the manufacturer and not worry about voltage sag under load, as that is already accounted for by the different capacity ratings such as 10 hour, 20 hour... drain rates?

It depends. Manufacturers use the C20 (20-hour), C10 (10-hour) or C5 (5-hour) capacity ratings as a standard way to express the total amount of Ah a battery can deliver when completely discharged in a given time, under given circumstances.

Note that this value says nothing about the battery voltage, only the current delivered over time. The battery voltage during this time will vary between about 12.7 Volts (fully charged) to 10.8 Volts (empty). The detailed behaviour should be looked up in the manufacturer's datasheet.

Generally, the slower an AGM battery (or any lead acid battery) is discharged, the higher the total amount of Ah it can deliver.

I.e. the total amount of energy delivered by a battery is highly dependent on the circumstances.

I have very seldom seen a lead acid battery that provided a capacity in energy terms (kWh, Joules, etc). Usually lead acid batteries are rated by coulomb capacity (amp-hours). If just one number is given for capacity, then it is assumed to be the capacity derived from a 20 hour test. (C/20 discharge rate). So for a 225 Amp-hour battery, if the only thing the manufacturer tells you is that the capacity is 225 Amp-hours, then that means the battery should be able to deliver 11.5 Amps for 20 hours continuously when it is new. There is no default voltage endpoint defined for zero state of charge, but 10 to 11 Volts is probably what is used for the test. Depending on battery type, discharging to 0% can be very stressful for the battery and cause it to wear out extremely fast.

Unless there is a battery datasheet, you really shouldn't assume too much more about the battery.

One Trojan AGM battery I looked at (MOTIVE T105-AGM) provided the following specifications for capacity:

As you can see this is a 6V battery, and they used the C/100 capacity and nominal voltage of 6V to measure the energy. As you increase the battery discharge rate above C/100, both the average voltage and the capacity will be reduced.

This tells you that there will be a non-linear decrease in energy delivered to the load as you increase the discharge rate.

Note also that the internal resistance for the battery is only 1.9 mOhm, and the short circuit current is 3250 Amps (both from datasheet). The internal resistance cannot explain the relationship between discharge rate and Coulombic capacity. The voltage drop due to 10.85 Amps (C/20) and 1.9 mOhm is only around 20mV. At C/100 it is only around 5mV. That tiny voltage drop difference of 15 mV cannot explain why the capacity increases from 217 Ah to 230 Ah when you go from C/20 to C/100.

First of all, let's get one thing out of the way: using manufacturer's data should always be done conservatively (as you've done), since they list the specs of their batteries at the most favourable conditions — e.g. room temperature, battery is brand new, ...

This overprovisioning alone is likely to account for more than the 6.25% you're wondering about.

So my question is, do battery manufacturers expect us to use the nominal voltage when calculating the usable capacity of that battery or the average voltage during the capacity test?

They do not expect anything, since they cannot know what you're doing.

They give their specifications expecting a constant-current load. That may well be the case - suppose you want to power a device that requires 9 volts and draws 1 amp. You may choose to use a linear regulator (likely a low-dropout one) to make those 9 volts. Then you'll be pulling constant 1A from the battery, and you won't care about the voltage as long as it is above 9 volts; voilà, the Ah rating is all you need!

You may also choose to use a DC-DC converter for this task, since that would be more efficient. How much time can you power your 9V/1A circuit? It suddenly becomes much more difficult to compute, because:

The manufacturers try to be useful by giving you typical discharge curves, that look like this: 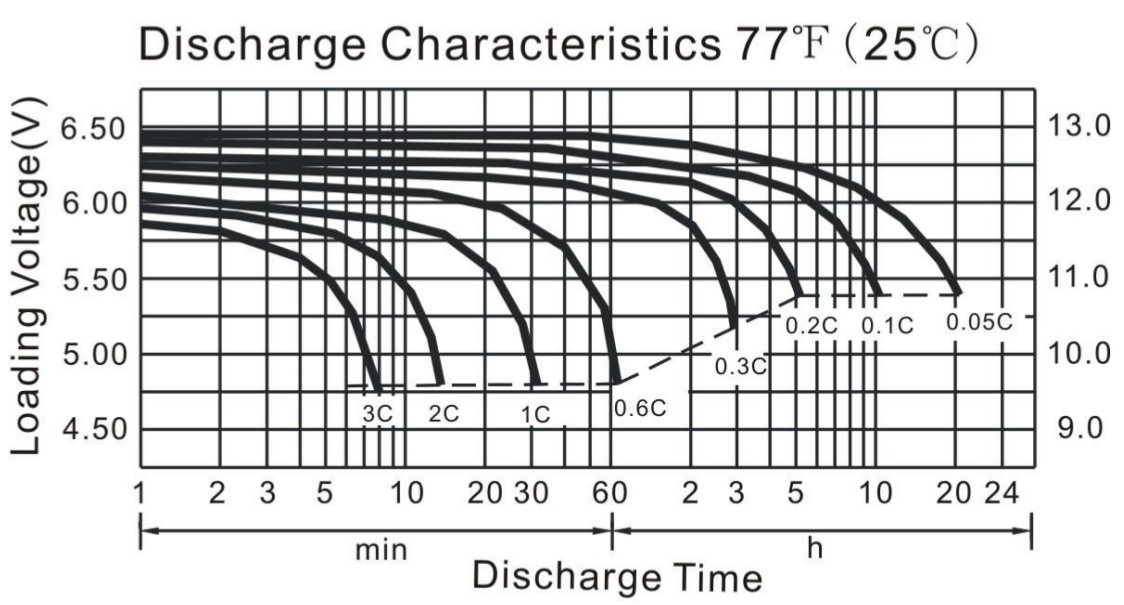 however that's not the full data you need, even though you may try to interpolate. In the end you may derive a mathematical model of the battery which fits the stated data, and then, by numerical integration, you can compute the Wh/KWh you'd get in your specific scenario.

The manufacturers don't do this for you, since there's a continuum of possible scenarios.

In the end, I find it much easier to do a real-life test with the intended load.

The (average volts × average current × hours × derating factor) Wh computation is a useful approximation that gets you in the right ballpark. It's not terribly important whether you'd pick the nominal vs average voltage; it's an approximation anyway, you should not count on it.

1
How to calculate battery capacity required for home applications?
1
Voltage drop when measuring battery capacity
3
Can I increase the no of operating hours of a battery without increasing its capacity?
7
Why do the Wh and mAh ratings of a USB battery pack appear to be inconsistent?
0
Battery Bank - How to achieve full amp-hour ratings with simultaneous series & parallel connections?
1
Lithium Ion Battery Capacity: Discharge Analysis
3
Battery ratings; am I reading this correctly?
0
Why does it take so long to trickle charge an AGM battery to the point where it matches the self discharge rate?
0
Can a 12V AGM battery be damaged by too light a load and relying exclusively on a 10.5V low voltage cutoff?