How can I stop my relay chattering as the voltage falls?

I'm powering a relay from a 12v power source, however this source does not immediately turn off, rather falls gradually for a 'fade' rather than straight off.

Unfortunately this makes my relay chatter multiple times in rapid succession open/closed just before it opens for the last time until next power on, as the voltage is just fluctuating around the critical level.

How can I avoid this? I tried some capacitors and while it helped I still wound up with it chattering at the end (Although slightly less).

You can use an op amp to operate the relay: 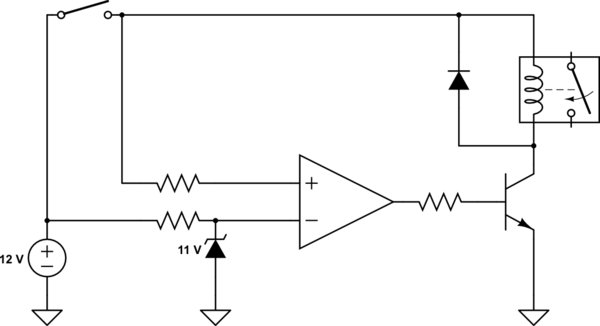 When power is turned off, voltage starts to drop. once it reached 11 V, the op amp will deactivate the transistor base and turn off the relay.

Not the answer you're looking for? Browse other questions tagged capacitor relay 12v or ask your own question.