Using a small heatsink with a high power LED (50W) 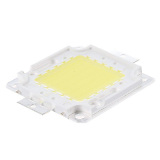 The space to integrate this component is limited. I have only 55mm*55mm*30mm in total. So the LED + Heatsink size must not be higher than that.

I found one that is just with these dimensions: 55mm*55mm*13mm 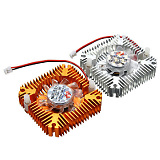 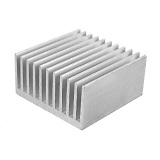 The LED will be put in a tight spot: plastic under and metal (don't know which one) on the sides.

2cm away from the back (from the heatsink) would be some wires.

I can leave the top cover of my device open in order for the heat to go away, no problem for that.

Is one of these two heatsink appropriate in my case? Which one would be better? I have no idea how much heat produces an LED like this

What is the risk of using such heatsink with a 50 Watt LED? Could the LED blow up? Burn?

Is it possible the sheath of the wires on the back melt?

If ambient temperature is 30°C and you want to keep the LED under 80°C, ignoring thermal resistance from junction to heat sink, you'll need a bit less than 1°C/W heat sink. Passive heat sinks with this thermal resistance exist but they're going to be huge and heavy (about half a kilo, and 200x70x50mm).

So you have to use a fan, like a CPU cooler.

The example heat sink with fan you link from banggood has no specs but it is way too small anyway.

This one could work but it is too big.

About 50W, and the LED should be kept reasonably not too hot (like 85°C maximum).

What is the risk of using such heatsink with a 50 Watt LED? Could the LED blow up? Burn?

With the heat sinks given as examples it'll fry in less than a minute.

Is it possible the sheath of the wires on the back melt?

The LED will probably fry first.

You have to do the thermal design first because that will set quite a lot of constraints on your whole design, like the shape of the enclosure, air flow, etc.

If you don't do the thermal design first then you end up painting yourself in a corner.

Your options are either to pick a cheap cooling solution and then design around that, or use something a lot more expensive that will fit in your current design, probably something like a 1U server cpu cooler with heat pipes and a flat turbine fan that will be very loud.

If you need flat, but can tolerate length, then a GPU cooler from an obsolete GPU could work too.

You could put the fan somewhere else and duct the air through the fins of a passive cooler similar to the one you posted, but you'll have to check its thermal resistance versus airspeed.

It's always a good idea to add a temperature control, or at least a failsafe which turns the LED off if it is too hot, in case dust or cat hair clogs the vents.

Remember the air has to flow, so the enclosure needs enough holes to let the cool air in and the hot air out... and it needs to prevent the hot exhaust air from being sucked back into the fan and recycled... I'm not sure how you intend to build this but if the LED has its back against a wall, then you're going to have to blow the air from one side of the heat sink for example.

I'm concerned that you have packed the LED in so tightly that you won't get any airflow around it. Leaving just the top open won't be enough to establish good convection...you need a way for cool air to get in at the bottom. You might be better off using the metal sides as the radiator, and thermally connect the LED to the sides with thick metal.

Is one of these two heatsink appropriate in my case? Which one would be better? I have no idea how much heat produces an LED like this

If you had the datasheet you could estimate its efficiency, but probably somewhere around 10-15% of the power becomes light and 85-90% becomes heat for a cheap COB.

The space to integrate this component is limited. I have only 55mm*55mm*30mm in total. So the LED + Heatsink size must not be higher than that.

You've picked the wrong COB for your application. Using a high efficiency COB will more than halve the input power requirements as compared to low end models, while further reducing the fraction of your input power that becomes heat. With a more appropriately chosen COB, you could probably get your thermal load closer to 15W at the same optical power radiated as a cheap generic unit. This will be much more manageable in a small space.

Not the answer you're looking for? Browse other questions tagged led heat heatsink cooling or ask your own question.