I have 20 185W panels in two strings each to a ginlong GCI-2k inverter. The panels are W facing 45deg, between two pitches with some chimneys. The prediction for latitude and moderate shading is 2000kWh but over 9 years I have generated 1450kWh fairly steadily.

From time to time I have thought about solar edge type DC/DC optimizers but the cost (£5,000) isn't justified for payback (£350p.a) as the panels are already 10yo.

Each panel has a bypass diode and the inverters are supposedly intelligently adjusting current draw to maximize power. Will this have the effect of 'automatically' bypassing panels that are shaded (so contributing zero) in order to get full current from the fully lit panels? Or will the shaded panels continue to reduce the current from all the other panels, in which case is it a good idea to make a simple monitoring and switching system to bypass panels?

EDIT - following comments below (thanks). Here are pics of sketches of switching system 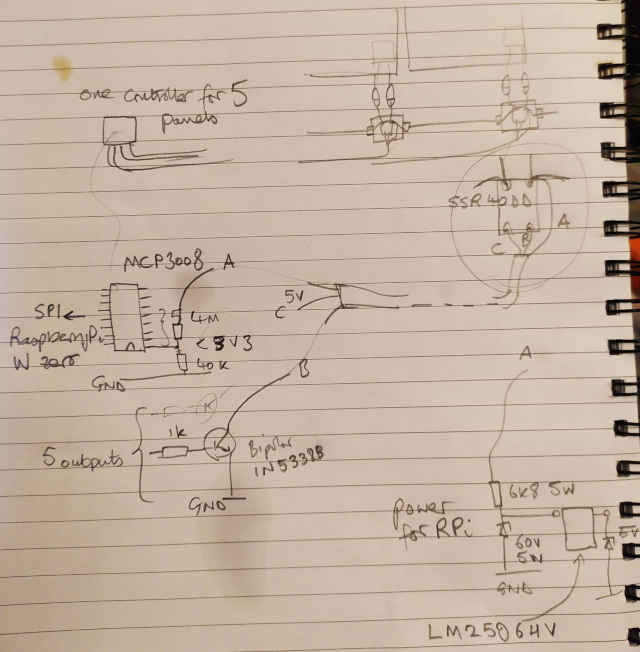 I_had seen the answer to the other question about shunt diodes but the load in that case is a battery with no current control on the solar side (presumably there would be something on the battery). I know the inverters tweak the DC_V/I but I'm not entirely sure how (there is a Voltage/Power curve set up in the inverter but I've not found any info on how it's used)

On my circuit sketches: the idea is to have a box at each panel to allow it to be bypassed (and shorted, does that matter?) using a solid state relay. There is a 3 core control cable to each box with 5V, return to switchable transistors and voltage measuring wire. For every 5 boxes there is a controller box with Raspberry Pi (because I've already done projects networking these with wifi so don't have to learn anything new) Also an A/D converter and power supply running from one of the voltage measuring wires. The relays would all open every now and then to check the voltage.

However there doesn't seem any advantage doing the complicated process if this is effectively already happening. On re-reading the answer in your link I think that is the case but I'm not completely certain.

Browse other questions tagged diodes solid-state-relay solar-energy buck-boost or ask your own question.

2
Can I and how to install a bypass diode on a solar panel?
2
Solar panel strings: when does current flow via bypass diodes where each panel has a different maximum power point?
3
How can microinverters be as efficient, or more, than power optimizers of solar arrays?
0
Questions About My Solar Home System School Project
3
Different Wattage Solar Panels for Home [different Voltage/Ampere]
3
Effect of shading on solar panel
0
Selecting proper bypass diodes for solar panel