How to constrain delay in the circuit without a clock?

Background: The image below is, in essence, a simplified schematic of the, so called asynchronous state machine (AM_fsm.v). The design does not have any clock input signal. It contains many SR latches and a lot of combinatorial clouds. (aka OR/AND/MUX gates). 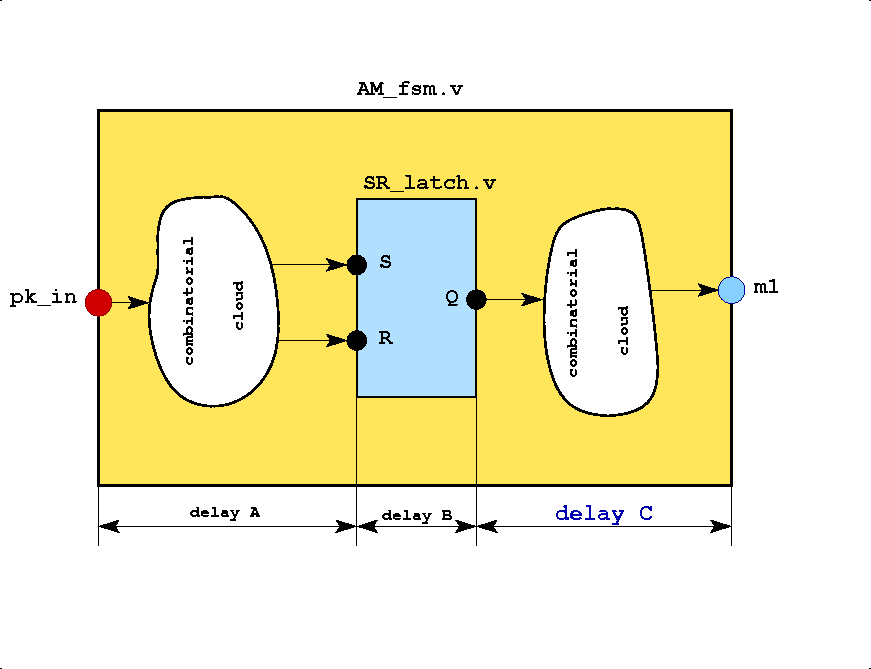 I even tried to put big load on the m1. It did help (slightly).

RESULT: Nothing from above reduced the delay_C.

Is there some other way to convince 'genus' to shorten the delay_C.

SOLUTION which works for my test case. I was able to reduce the delay_C from approx. 1200 ps (unconstrained) down to 420 ps (constrained).

Not the answer you're looking for? Browse other questions tagged fpga verilog synthesis timing-analysis or ask your own question.

1
How the delay locked loop (DLL) align the clock?
4
How do you constrain input delay for a multidimenionsal input vector?
0
How does design compiler constrain combinational paths?
1
How can I constrain an imported netlist in Vivado?
3
How to specify a minimum clock to output time in output timing constrain?
3
Introduce delay on a single bit signal w.r.t. input clock
0
How to constrain a clock signal out from a multiplexer
4
How to properly constrain generated clock and synchronizer in Altera Quartus?
0
Why the simulation time of a synthesized netlist depends on the clock period at which it is constrained?
1
IO clock pin far from design, reduce propagation delay