When transistor (bipolar transistor in common emitter amplifier) is closed (not conducting) or opened saturated (enough base current, collector current is limited by the resistance of the load), it dissipates the power well within its limits. However switching from opened to closed obviously goes over all intermediate values (it is probably not possible even theoretically to be otherwise, the question is just how fast).

Should I normally care that transistor would stay within its power limit at the intermediate values, if I truly believe that thermal issues are highly unlikely (controlled by digital input that has only two values and changes fast)?

There are no time based limits on the specification sheet. Are there any generic rules about this maybe?

Decades ago I worked on a satellite project. Lotta good stuff to learn; most of my circuits worked first time, so they let me handle integration of the entire "box" we were building.

One of my circuits was a stripped-down version of the customer-suggested relay-driver schematics; they suggested an AC_coupled positive-feedback 2-transistor circuit. I thought "We don't need that."

The heat rise in a millisecond was 1.4 milliWatts / 1.6 milliJoules/degree C, or about 0.8 degree C.

And any current imbalance in the emitter region will lead to thermal runaway.

Cure? We kludged the PCB to use the extra transistors and the positive feedback. The customer did not want to respin the PCB. To teach me a lesson.

I learned my lesson on Safe Operating Area.

That PCB/box is still in orbit today. Kludged, to avoid SOA failure.

I made the mistake; I'd striped out the switch-the-device-quickly extra components. Thus the 10 micron thick active region (the collector implant) had to dissipate the 1.4 watts, briefly, and the device developed hot spots due to slight emitter variations.

By reducing the "briefly" from milliseconds to nanoseconds, by positive feedback, the switching event became non-destructive. I needed to learn about SOA.

The 2N22xx family has a thin base and achieves 100+MHz bandwidth at moderate current.

While turning on and off, your transistor produces so-called switching losses:

As you can see, the switching losses depend strongly on your switching frequency.

If they're relevant to your application or not depends on the ratio of switching losses to conduction losses.

This figure from "Review of Switching Concepts and Power Semiconductor Devices" (no author) illustrates the power losses when a bipolar device is used as a switch: 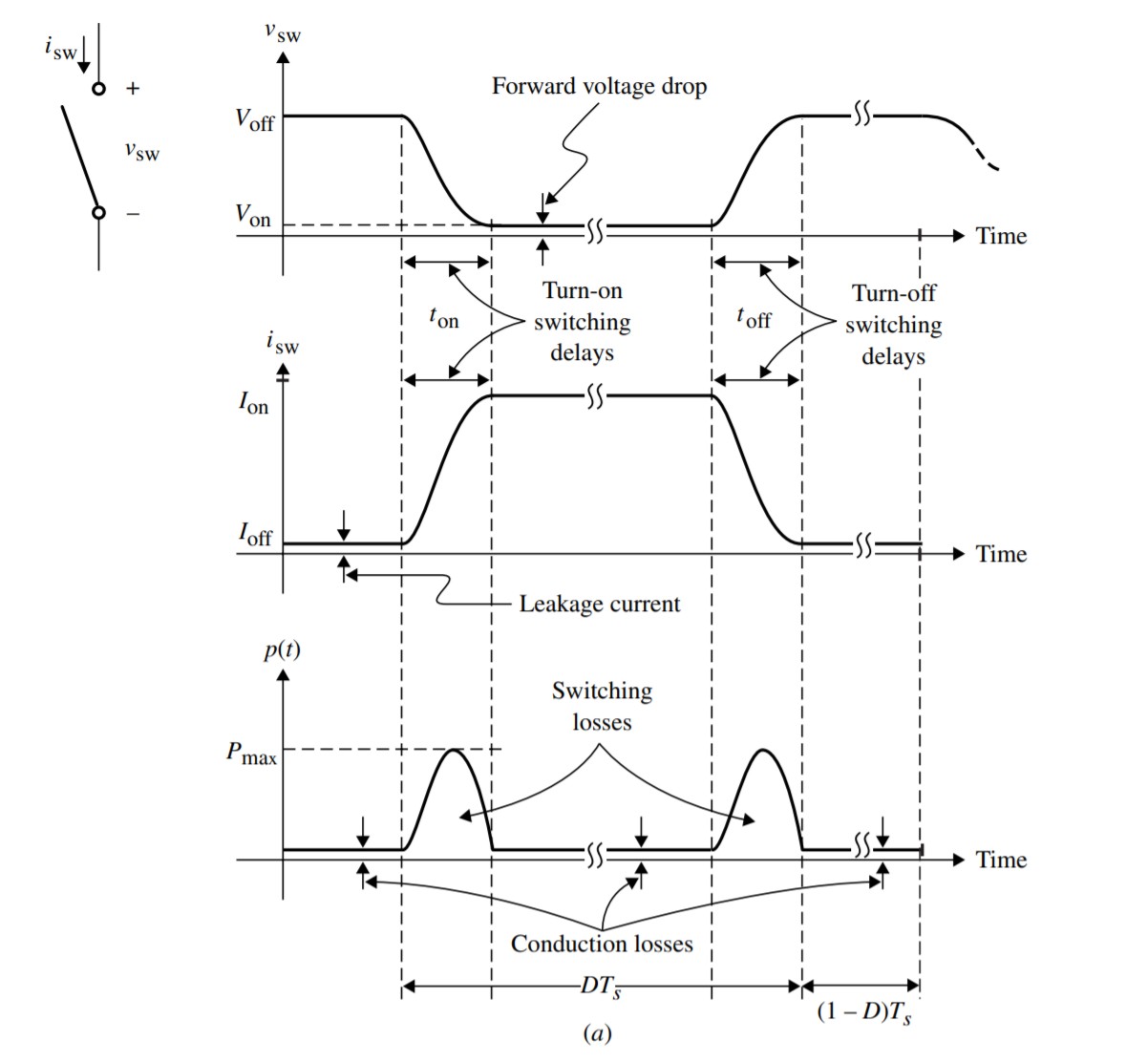 There are two considerations. One is that the average power, when multipied by the thermal resistance (junction-to-ambient if there is no heat sink, or junction-to-case if the heat sink temperature is known) gives the temperature rise of the device. This rise is added to the ambient temperature, and if the result exceeds the maximum junction temperature, the device will fail. The second is that the transistor remain in the Safe Operating Area (SOA), often plotted as a family of curves (operating temperature or pulse duration) for single non-repetitive pulses on a graph of collector current versus emitter-collector voltage. During the switching time, the transistor's simultaneous voltage and current must remain inside this region.

Not the answer you're looking for? Browse other questions tagged power transistors switching or ask your own question.