Low power LiPo cell ADC with an nMOS switch and a resistor or capacitor divider circuit?

This is my first question on this platform and am looking for advice on doing a very low power LiPo battery measurement for a wearable device. My current circuit looks like this: (See image below)

Previously, I have implemented resistor dividers of 10Mohm resistors (for MCU that can take only a max. of 3.7V as ADC input which doesn't work with a fully charged 4.2 V LiPo cell), but I didn't like the idea of them continuously draining the battery. So I am adding an nMOS which will be turned on by MCU only when it needs to measure (like every 60s or 60 min). The on resistance on nMOS can be calibrated in the MCU firmware.

However, I am considering further using a low ESR 2.2uF capacitor divider instead of resistor divider here, to minimize current consumed even further when nMOS is ON. Will capacitor divider provide similar ADC results (considering the charge time constant doesn't factor in if I wait 1 second to measure ADC). I couldn't find a similar circuit online and was wondering maybe its so because of a reason. Can you guys advice, suggest or provide feedback on using C vs R divider network for this particular idea?

Any suggestion would be appreciated here.

Based on suggestions from @DKNguyen and @BruceAbbott, I have edited my circuit below, realizing only nMOS won't work in either high or low sides. This is because, as @DKNguyen mentioned, that the source of nMOS is floating for nMOS to initially turn ON (Vgs > 0), on the lower side, the ADC pin will pull current directly from the battery (which is why I was using switch in the first place). The new circuit follows the same example solution highlighted by @stevenvh in the following link: Measure Lithium ion battery voltage (thus remaining capacity)

I am using 0.01% resistors for higher accuracy, using enhancement type MOS to minimize energy consumption when they are OFF when not in use. Also, thinking at this point, the cost of this setup and size almost equal, if not more, than cheap and small battery fuel gauges they have out there like MAX17301 which is only $3.63/unit and 1.7mm x 2.5mm only which I am seriously considering at this point. But its always great to learn more about basics.

Now my question remains, can we still use capacitor divider instead of resistor divider in the new circuit to minimize current consumption even further? 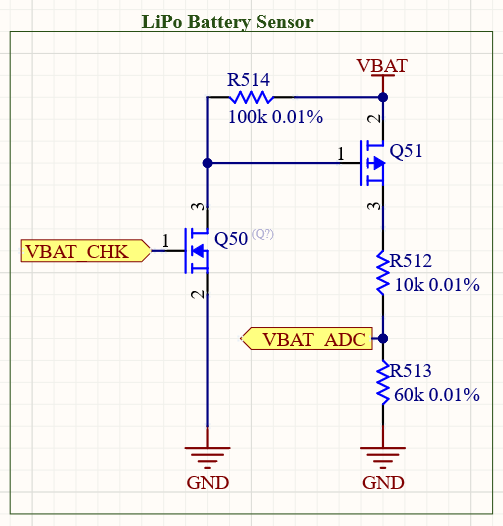