Reasoning behind equations in analysis of electrical circuit

I am currently studying the mathematics textbook Nonlinear Dynamics and Chaos by Strogatz. As part of an example, I am provided with the following electrical circuit and accompanying explanation: 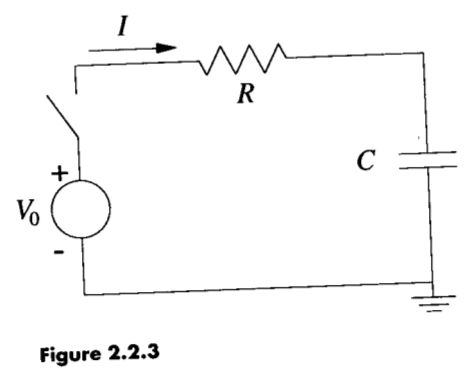 Solution: This type of circuit problem is probably familiar to you. It is governed by linear equations and can be solved analytically, but we prefer to illustrate the geometric approach.

First we write the circuit equations. As we go around the circuit, the total voltage drop must equal zero; hence \$ -V_0 + RI + Q/C = 0 \$, where \$ I \$ is the current flowing through the resistor. This current causes charge to accumulate on the capacitor at a rate \$ \dot{Q} = I \$. Hence

I have started studying electronics, but I'm still learning the basics, and haven't yet learned enough to understand the electronics reasoning for what the author has written. Specifically, I'm wondering about the following:

I would greatly appreciate it if people would please take the time to clarify these points.

I'm going to try to address the mathematical details of how the equation corresponds to the circuit, rather than talking about the bigger picture of the circuit behavior, in hope of bridging the right gaps of understanding. Note that I may use some nonstandard terminology as I have not formally studied circuit analysis.

Kirchhoff's voltage law states that the directed sum of the voltages around a circuit equal zero, but what is the reason for the terms of the equation \$ -V_0 + RI + Q/C = 0 \$ being structured as they are? Specifically, why is the voltage given a negative sign, …

Mathematically, in order to have a sum to zero, then some terms must be positive and some terms must be negative (or degenerately, they must be all zero). It doesn't actually matter whether you put minus signs in the equation, or make the variables or constants have negative values; either will work, but there will always end up being negative numbers somewhere. You should arrange them however makes the numbers you end up with convenient to work with, which usually means, for example, choosing to have \$V_0\$, \$R\$, and \$I\$ be positive numbers.

But, of course, if we arbitrarily choose the signs of the terms we will not necessarily get the right answer; not all circuits are as simple as this one where any given choice of signs will give you either a correct answer or a physically impossible one.

Now, let's consider where those specific terms come from.

why is the resistance multiplied by the current

The ideal behavior of a resistor is described by Ohm's law, \$V = IR\$. The \$V\$ in this equation is the voltage across the resistor, so we can just drop that right into our voltage sum.

In the same way as Ohm's law describes ideal resistors,

describes ideal capacitors (without having a historic scientist's name attached to it). The theory says that a capacitor will have a linear relationship between the charge on it and the voltage across it, and the constant of proportionality is known as capacitance, \$C\$. So, if we want to know the voltage, we solve for \$V\$ and get \$Q/C\$.

(Note that if the initial condition is \$Q = 0\$ then it doesn't matter which sign we give to the capacitor's term — changing the sign corresponds to reversing the capacitor in the circuit which, since it's symmetric, doesn't change anything.)

Finally, an ideal voltage source is a component that has a fixed voltage across it, so its term in the equation is just \$V_0\$, the fixed voltage. (It is negated because of the choice of signs versus current direction I mentioned earlier.) That gives us all three terms of our sum of voltages.

There's a fact/equation they didn't mention explicitly: Current is the flow of charge. As one might expect for a flow of substance, current \$I\$ flowing for time \$t\$ moves an amount of charge \$Q = It\$; or in full generality for a time-varying current,

When you have a current flowing through a capacitor, the charge on the capacitor is exactly this integral, because, physically, the individual charges cannot pass through the capacitor, instead causing a surplus and deficit of charges on the two capacitor plates (which is what the variable \$Q\$ for a capacitor refers to).

Solve this for \$ \dot{Q} \$ and you get the last step written in your quote,

Then solve this differential equation to obtain a formula for \$Q(t)\$ and you've completed the problem.

1) Supply voltage V0 must match to voltage over resistor and capacitor to complete the loop. Since Ohm's law says R=U/I, then it can be rearranged to U=RI which is the voltage over resistor. Charge of capacitor is Q=CU, so rearranged, voltage U=Q/C. Thus, applied supply voltage minus resistor voltage minus capacitor voltage must be zero at all times. Rearrange the terms to get same signs. Sometimes when making a book, you have to select a notation and stick to it, even if there seems to be little sense.

You already have an excellent answer, but maybe a little more information would be of interest. The RC low pass filter has one energy storage element (the capacitor) and one dissipative pathway (the resistor). Before the switch is closed, the input is zero volts and the cap is assumed to have no stored charge, so its voltage is zero. At t = 0, the switch closes and the input voltage jumps to some \$ V_0 \$ volts. So this system is governed by a first order ordinary differential equation with initial condition.

All systems with a single energy storage element, a single dissipative pathway and an initial condition are governed by the same differential equation. So this applies to many systems, e.g. a cup of hot coffee cooling down (Newton's law of cooling); first order radioactive decay; fluorescence decay of an excited atom and on and on. It is all over the place.

Here is my figure showing the differential equation and its solution, assuming a unit step function input at t = 0 s: 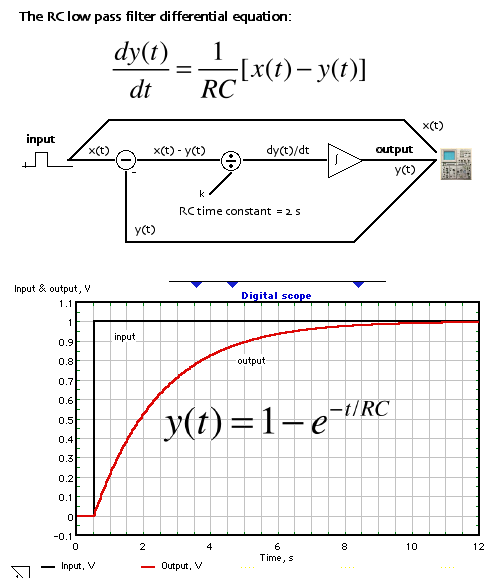 Also shown in the figure is my numerical simulation model (using Extend), with RC = 2 s and \$ V_0 \$ = 1 V. Everything works exactly as @Justme says in his answer.

Not the answer you're looking for? Browse other questions tagged voltage capacitor circuit-analysis capacitance kirchhoffs-laws or ask your own question.

7
Simple transistor & capacitor circuit question
5
What actually happens in a RC circuit?
0
Capacitor behavior on collector of a BJT?
0
Basic Capacitor Question To help Cement My Foundation Properly (LTSpice)
1
Can I treat two identical capacitors with capacitance \$C\$ in parallel as one capacitor with capacitance \$2C\$?
4
why does RC time constant happen to equal 1/e?
11
Heat lost in ideal capacitor charging
3
Why does this capacitor shorten the clock pulse?
3
LC in parallel with R circuit resonance