I'm trying to develop a kind of light detector. To do that, I'm going to use a photodiode and a bjt transistor to amplify its current. I found a circuit in this tutorial:

which explains how the phototransistors work. It is pretty simple, but I'm not able to understand two things:

I guess I'm missing something obvious, but just can't get, what exactly.

It is said that Rb is optional. But the photodiode needs bias to work in that way. How on Earth it will be biased? Maybe due to base-emitter junction, but how exactly does it work?

What if the Rl resistor would be connected to collector? I tried such circuit with this photodiode and this transistor.

I expected Rb voltage to be about 1,2V because of the 12uA current produced by the diode, but actually it was about 0.7V and the circuit was extremely unstable - it turns off and on for unexplainable reason.

Rb cannot be 1.2 V because the transistor's Base-Emitter junction draws exponentially increasing current as Vbe rises above ~0.6 V (this is the reason for the high voltage gain in Common Emitter configuration). The circuit didn't turn on for an 'unexplainable' reason, it just became very sensitive to light intensity variations above a threshold level.

This is useful when you want a circuit to turn on and off when the light level goes above or below a certain intensity, for example in a nightlight daylight sensor. However since Vbe is temperature sensitive and ambient light levels may vary, it is more commonly done with a linear light sensor followed by a comparator with adjustable threshold to set the switching point.

The transistor chosen is a PNP type (2N2905 equivalent). The example circuit requires a NPN transistor, something like a 2N2222. You can certainly get a PNP transistor to amplify, but you must use a different circuit: 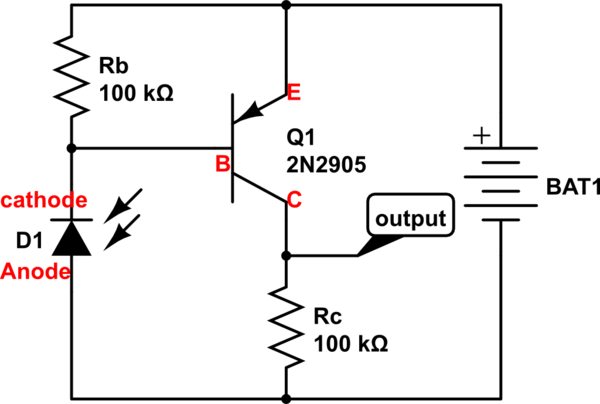 With Rc=100k, sensitivity to light may be excessive, so that even with room light, transistor Q1 is saturated...its collector voltage will be close to BAT1+. In that case, use a lower-value resistor for Rc.
Rb can be removed, if you want to be very sensitive to low light.

I've quite successfully used a phototransistor, with negative-DC-feedback to stabilize the collector voltage. This also removes some/most of the response to incandescent bulb photon flux. The DC feedback also removes SUNLIGHT variation.

Not the answer you're looking for? Browse other questions tagged transistors current amplifier photodiode or ask your own question.