This is my first time using dual-coil latching relays (Kemet EC2-5TNU), and I'm running into some strangeness when breadboarding out the below circuit: 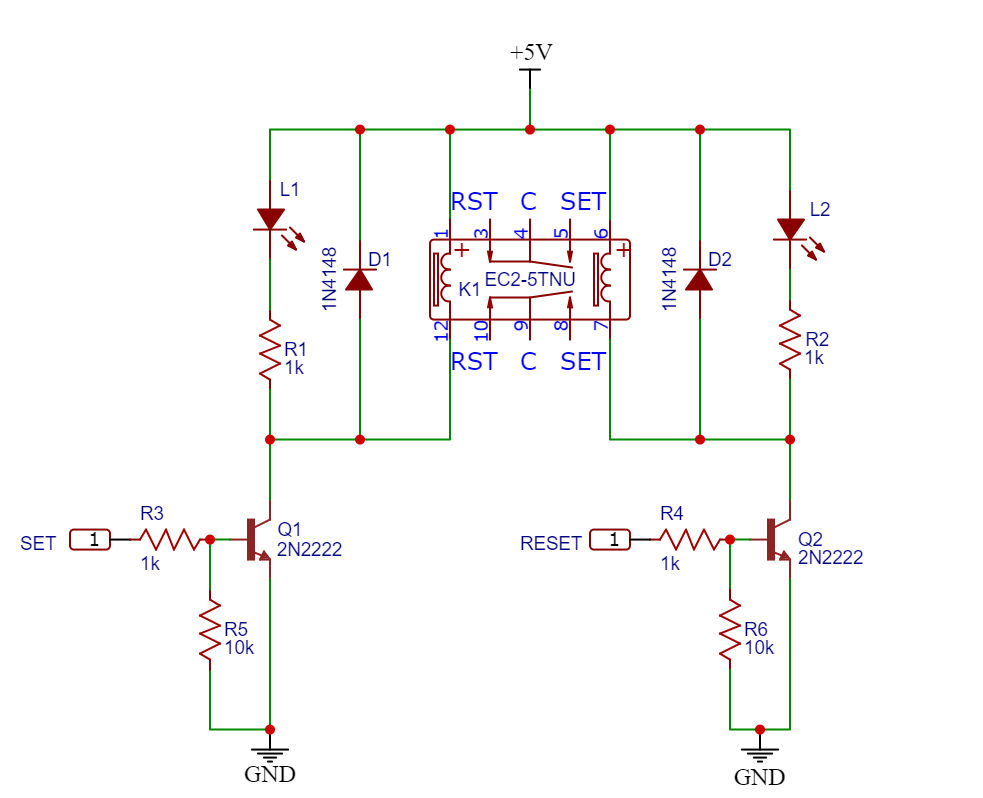 The coils switch without issue when sending a pulse to either transistor, and the LEDs simultaneously pulse without issue as well. The thing I'm seeing is when I release the voltage driving the base of either transistor...this causes the opposing LED to do a brief and dim pulse. As an example, I'll pulse the SET coil...on the trailing edge of that pulse, instantly the RESET LED will pulse dimly. And vice-versa.

I know this is probably very 101, but I just can't seem to find an explanation in my searches. I have flyback diodes in place as you can see. Is it possible (using the example above) that when the SET coil's magnetic field collapses on the trailing edge of my trigger, it's inducing something in the opposite coil somehow, such that the opposite LED is getting forward-biased for a moment? Yeah, I'm spit-balling here obviously.

I did find an extensive Omron app note that recommended putting an extra diode in series with the Set or Reset coil when doing certain configurations (Page 23 here). Those configurations didn't seem to apply, but I figured I'd at least try...and lo and behold, it did indeed fix the issue. But I'm curious as to the why? Here's the updated schematic for that: 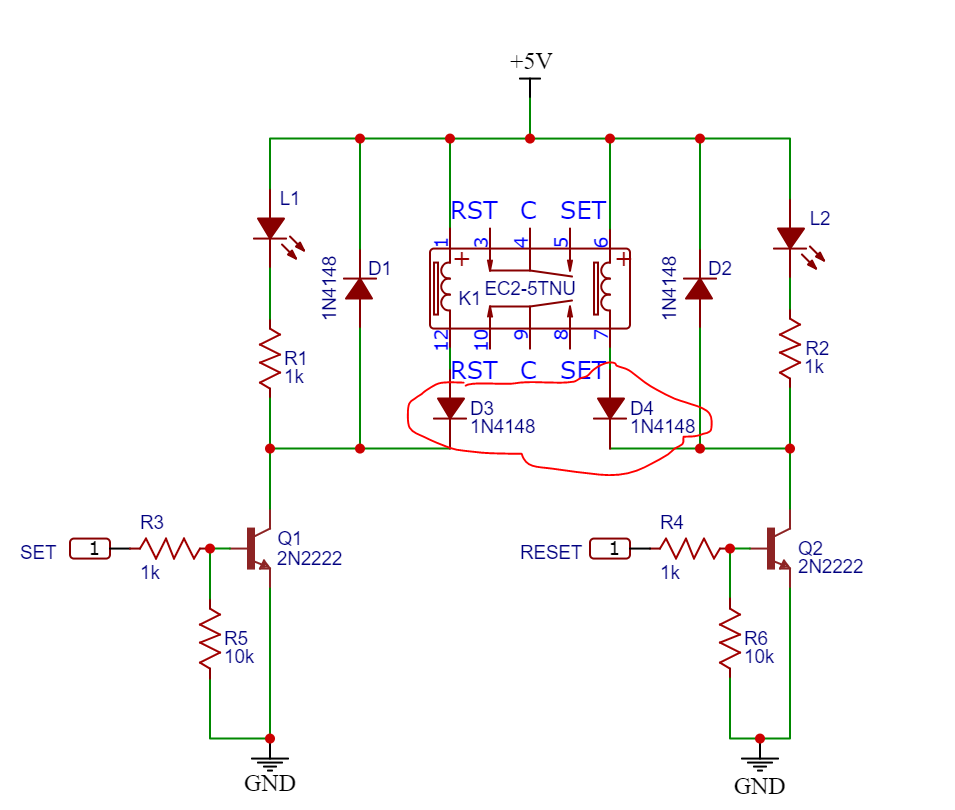 I'm scratching my head, since besides the shared VCC and ground, they're independent circuits...right? Wondering if somebody might be willing to give me a hint as to what is happening here. Is it really necessary that I have those extra diodes to use a latching relay like this, or are they just a band-aid for something I'm overlooking here? Thanks for any input!

Edit 1: After Jasen’s comments I decided to open up one of my latching relays to get a visual on it. For the record I had a whiskey and made a burnt offering to the relay gods first. Picture should be attached if anybody is curious. 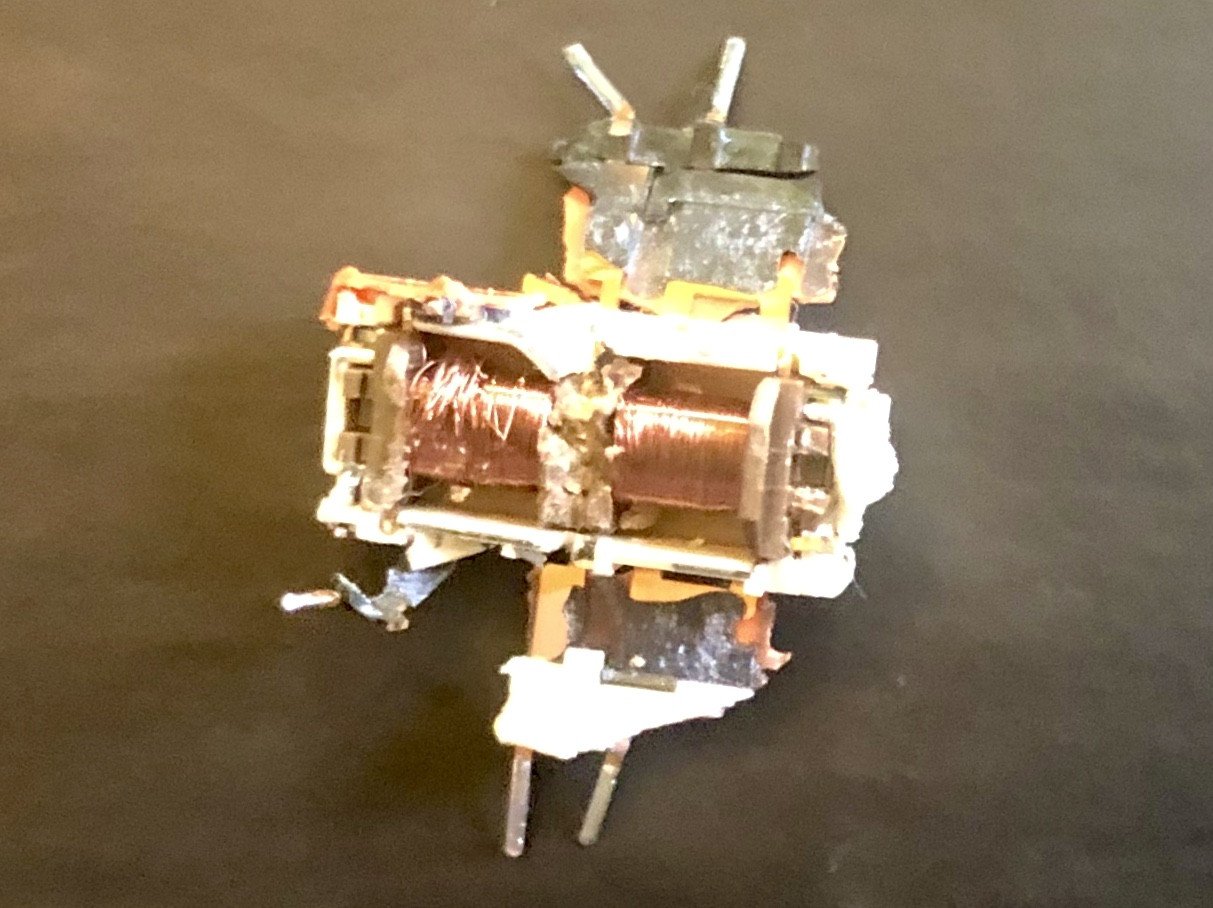 Edit 2: OK, so I scoped it with my original circuit above (without those extra 2 diodes D3 and D4)...I put the probe at the Collector of Q1, which is part of the Reset circuit...then I pulsed Q2 to trigger the Set coil. On the trailing edge of that pulse, the scope shows a dip of about -4V from the Reset coil before coming back: 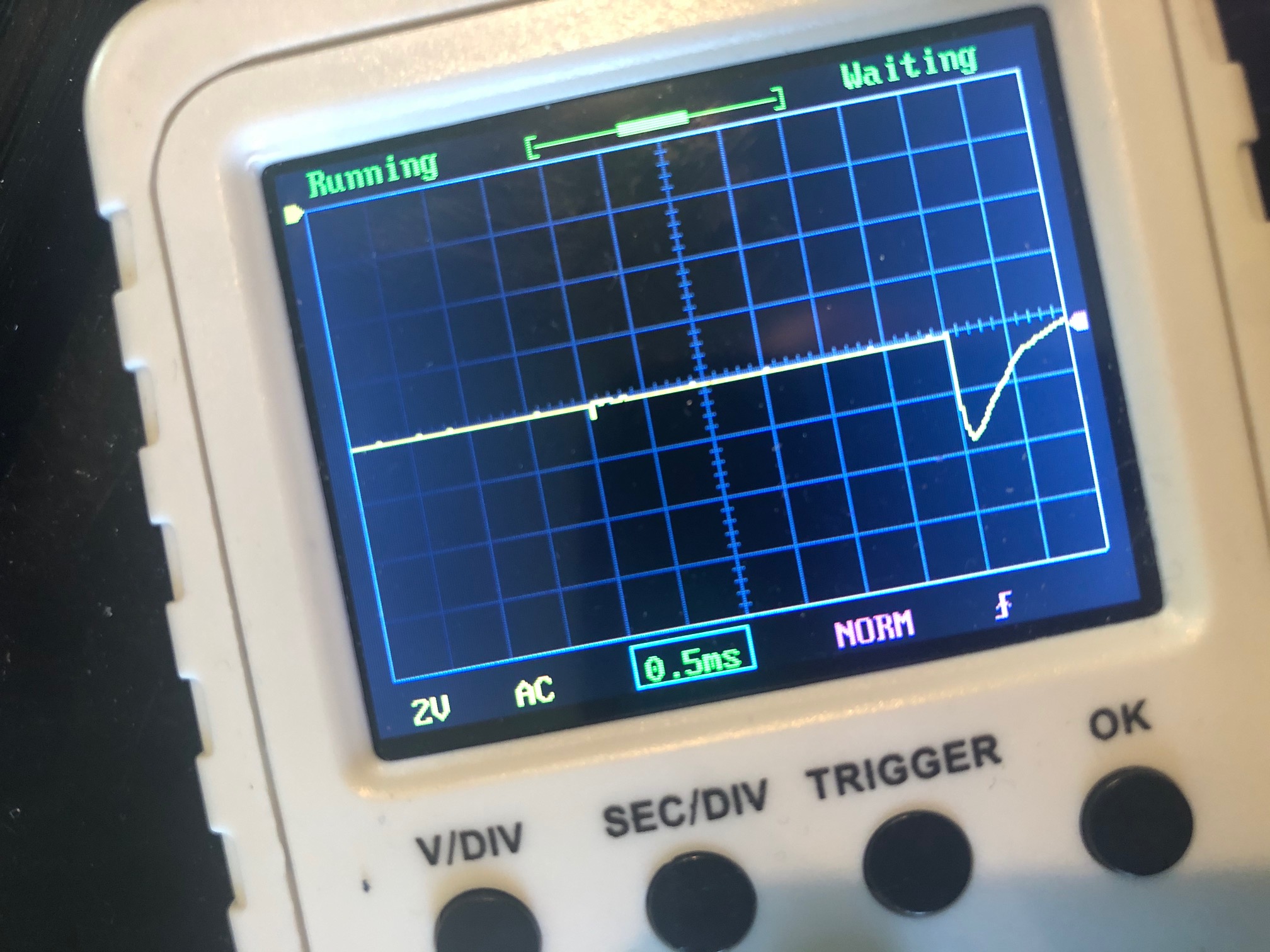 So I'm thinking the presence of this momentary negative voltage is forward-biasing the LED. And the reason the Reset LED no longer pulses with D3 in the circuit is because during that negative voltage, D3 is reverse-biased...thus the LED never sees the negative voltage and stays in its inactive state. Does that make sense?

the two windings are wrapped on the same former in opposite directions, this forms a type of transformer so you can put energy into one coil and get a little out of the other coil.

Since VL=LdI/dt increasing the diode voltage allows a faster rate of recovery. VL is the diode + zener voltage drop.

Not the answer you're looking for? Browse other questions tagged led diodes relay latching or ask your own question.