I have purchased these following components:

We are currently experiencing a shortage in electrical supply in our country. So in order to keep the property light during the night I decided to make an emergency backup light.

My question is, will it be safe to keep the battery connected to the inverter continuously, so the system is autonomous and only turns on and consumes the battery when there is load-shedding?

And I only to intervene when the battery needs to be charged. On this point is it also safe to put a 12V SLA battery charger to charger the battery and still keeping it connected to the inverter?

The LED only runs for 2 hours per day. There is no timer controlling this. The power utility (Eskom, South Africa) which implements the blackout, turns of the power lets say at 20:00pm, the utility then leaves the power off for only 2 hours. They then turn the power back on after that. The reasons for this is because the utility tries to lessen the burden on the power infrastructure by having planned power outages for 2 hours per day. Hence the relay is used to switch the light on when there is a power outage via the mains control signal and then turn the LED off when there is mains power.

12V/18Ahr SLA battery should not be discharged deeper than 50% if you want it to last a long time, so I'll consider it a 9Ah battery.

That is only 100 W, you have a 50W light, and the inverter will also add losses, so battery life will be less than two hours.

If a blackout occurs during the day, and goes on into the night, the battery could be drained before it gets dark and you actually need light. So it could be useful to add an ambient light sensor to only turn the light on at night. A PIR motion sensor to only turn it on when there are people around would also increase your battery life. You could also use a PIR sensor to turn on a powerful light, and leave a low-power light on continuously. Note that such mains powered motion/light sensors tend to use capacitive dropper mains supplies which do not go well with modified sine wave power.

The inverter will use power even if the light is off. Probably something like 5-10W if it's a cheap inverter. So if there is a blackout, the battery will drain even if the light is not used... If you don't use sensors this is less of a problem, but your charger will still have to waste power to compensate for the inverter's idle power. So, in your current schematic it would be more efficient to put the relay between the inverter and the battery.

IMO a better option would be to get rid of the inverter and use a 12V LED floodlight instead. These are common and quite cheap due to high market demand (every pimped-up truck has at least one) so look for the terms "12V led bar" or "12V led flood". You can get cheap 12V motion detectors too if you need them.

This will be more efficient as voltage will only be converted once rather than twice, there will be no inverter losses.

You will need a low-voltage cutout to make sure the battery is never over-discharged as that will severely shorten its life. You can make the cutout latching or non-latching. In your case, non-latching is probably better if you want it to work without having to babysit it. "12V battery low voltage disconnect" and sort by price on Amazon gives results.

Even if you use the inverter, it is important to check it has a low-voltage cutout too! If it does not it will kill your battery.

The charger arrangement is OK as long as the charger is designed to competently both charge and float a 12V lead acid battery.

The ability to correctly boost charge when charging from depleted state also desirable for full capacity and long battery life.

Having a low voltage battery cutout is very desirable if operation 'flattens' the battery.

Discharging a battery deeply shortens its life and loading it down to very very flat is very bad for it.

As proposed, it will function, but badly enough to have usability problems.

The inverter has got to go

The weak point is the inverter. You should be staying at native 12V (or 24V DC, if distance is a factor) for several reasons.

Why don't you want this light coming on when the power is on? Does your yard not need lighting then? I bet it does, and I bet there's another light already. That is silly, there don't need to be 2 lights unless you want to do a high/low thing. But then you mentioned an "On when power on" relay! That's a good use for that relay.

Other than that, I'd skip the relay altogether, reduce system complexity and simply allow the light to work even when the power is on. Make sure your power supply is big enough to both top up the battery and carry this load. Which, to your original question, is fine, as long as it's capable of 3-stage charging.

If carrying 12V long distances is an issue, use 24V, or put the whole package out there at the light.

It's hard to find bright, useful 12V yard lighting in the normal places you look for yard lighting. You have to look elsewhere. I've found happy choices in automotive / off-road. I use a 42W 8-degree spotlight (12V of course) that is as bright as a locomotive headlight. They also make them in 30 degree and 60 degree spot. So work out your angles and see what you really need; often, far less than you think.

The most important thing about yard lighting with LED is aiming it properly. Usually people are replacing metal-halide lights, which cast light in a sphere - with reflectors they cast light in a very wide wedge of almost 180 degrees. We had seven of them lighting up a yard; they burned 3300 watts. Seriously. And they mostly lit up the sky... trees... our neighbor's bedrooms... I redesigned the lighting system to use LED spot lighting, and cut the draw down to 300 watts simply by aiming the lights properly. Mind you, metal halide is already near 100 lumens/watt so there was no lumen efficiency gain. It's all about the aiming. 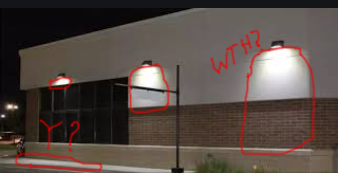 For a wall-pack light, the presence of the wall is not a surprise, so there is simply zero excuse for throwing any light at the wall. LED fixtures should be lensed so all the light misses the wall and most gets thrown beyond the here-overbright sidewalk. This involves about a 45 degree wedge of light, but that is easy for LED. These here 40W lights could be 15W and cover the yard as well.

Not the answer you're looking for? Browse other questions tagged inverter battery-operated or ask your own question.