I got this circuit and put on a breadboard, but the power source I have is 5V instead of 9, so I had to recalculate the resistors to make it work, but it doesn't. 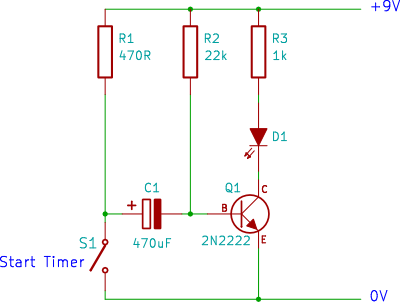 I just don't understand how this circuit works and the source website is quite bad on explaining why they are connecting the components in that way.

How and why this works?

When the switch is closed, the positive terminal of C1 is grounded. The capacitor is charged to (Vcc - 0.7V) so the base of the transistor is now at -Vcc+0.7V, which turns the LED off. The capacitor begins to charge towards +.7V with a time constant of 470uF * 22K ohms or about 10 seconds).

When it reaches about +.7V the LED turns on again. The capacitor from this point forward has a reverse polarity of about 0.7V across it.

So let's see if the numbers work with the original resistor values. Let's assume a red LED with Vf = 1.8V and Vcc = 5V.

LED current of 3mA. That should be okay for a modern LED.

So it should work just fine from +5V. The off time will not be exactly 10 seconds, but it should be somewhere roughly that neighborhood.

If you, for some reason, scaled the resistors by (say) 5/9, the circuit would probably still work, however the time would be reduced.

If you're paying attention you may have noticed a couple of things. In the original configuration the base would go to -8.3V. That's well above the absolute maximum -5V and could damage the transistor. It's "probably" okay for a hobby circuit, but only by a slim margin. If the base breaks down, as it almost certainly would with, say, a 12V supply, the transistor will be destroyed the instant the switch is closed.

Secondly, the polarized aluminum electrolytic capacitor gets a -0.7V charge. That's generally okay, contrary to popular belief, but not much more.

Spehro explained the circuit well, I will discuss troubleshooting steps. Even experienced engineers don't always design and build circuits that work the first time. Troubleshooting is a vital skill that you need to learn.

For this circuit, I would simplify it until the LED lights up.

Remove the cap to make a simpler circuit. Most likely, the LED will still be off.

If these are good, remove Q1 and tie D1 anode to ground. The LED should light up.

If the LED doesn't light, it is probably in backwards.

If the LED does light when connected directly, your transistor is probably wired wrong. (or, you fried it). Re-install the transistor and check the wiring carefully.

@Spehro Pefhany's explanations are, as usual, perfect but specific. I will consider, as usual, the "philosophy" behind circuit. Both approaches are useful and necessary to form a complete picture of the circuit... although, in this material world, the implementation is valued more than the idea...

The clever idea here is not to charge or discharge but to reverse charge the capacitor... and this is a crucial advantage of this configuration. Why?

If we make a timer either by charging or discharging the capacitor through the base-emitter junction of the transistor, it will switch at the end of the exponential curve where it has very small slope... and it will not switch sharply. In the first case, the capacitor voltage will change from zero to +VCC; in the second case - from +VCC to zero.

Here, the capacitor is reversely charged to -VCC; so its voltage tries to change from -VCC to +VCC (two times greater range). The base-emitter junction is backward biased and does not affect the voltage. But when approaching the ground voltage (more precisely, 0.7 V), the voltage rapidly changes... the base-emitter voltage sharply turns on and fixes the capacitor voltage.

I have realized this idea not only from my work with students but also from my personal experience when I tried to make simple timers for any purpose, especially in cars.

It is a called a 1-shot when something is enabled then times out for some period. In this configuration, you have to hold down the switch to disable the LED switch for some desired 1-shot period.

It must be pressed longer than about 60% of "Tau"= τ = R2*C an estimate of the exponential ramp time of the negative voltage applied to the transistor Vbe to disable the switch.

Q1 acts as a switch because R2 applies more than 5% of the collector current into the base which causes Vce voltage to drop << 1V. So when going from OFF to ON collector starts as a high resistance current source Ic/Ib=hFE then goes into a low resistance conductor between collector and emitter when Vce approaches 0V where the transistor changes its characteristics.

"Forward biasing" the base emitter, Vbe with voltage >0.6V or collector current >1mA such that the V=IR + Vf LED drop from the supply causes the tranistor to "saturate" as a switch.

So initially with the switch open using a 5V supply below, I can demonstrate with values to blink off the LED whenever the switch is held down more than 60% R2*C1. But it will turn ON immediately if released quickly.

R2=33k, C1=10uF T= 330ms so we expect ~200ms blink OFF time. Your circuit had 470uF*22kΩ =τ=10s but Transistors are designed with high gain such that unfortunately, the Veb reverse voltage is almost always -5V max, as a safe limit before stress-damage will occur. This must be avoided to prevent wounding the device or a permanent short-circuit. 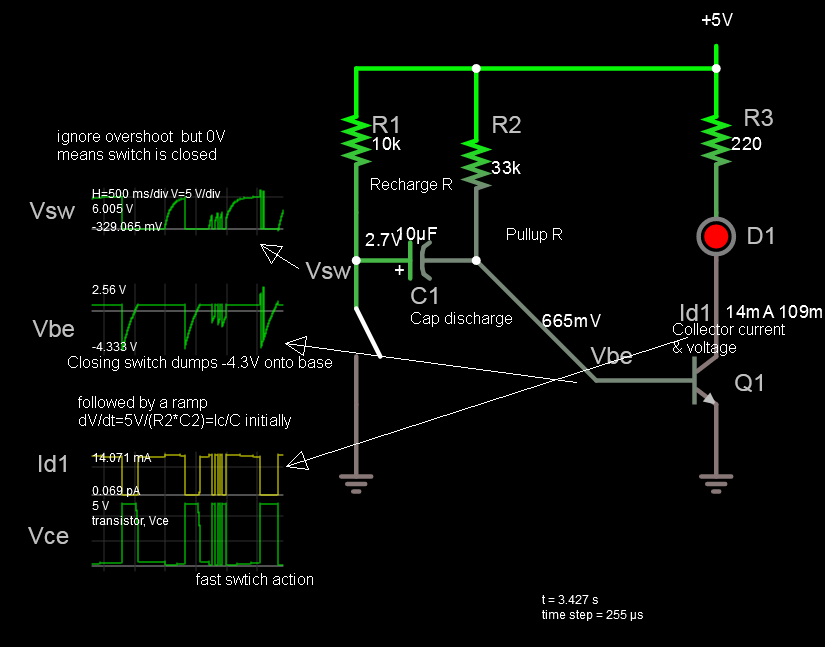 Now for longer times a FET or a CMOS logic Inverter works best.

Here the switch is edge sensitive and power on also triggers the switch ON for 10 seconds. 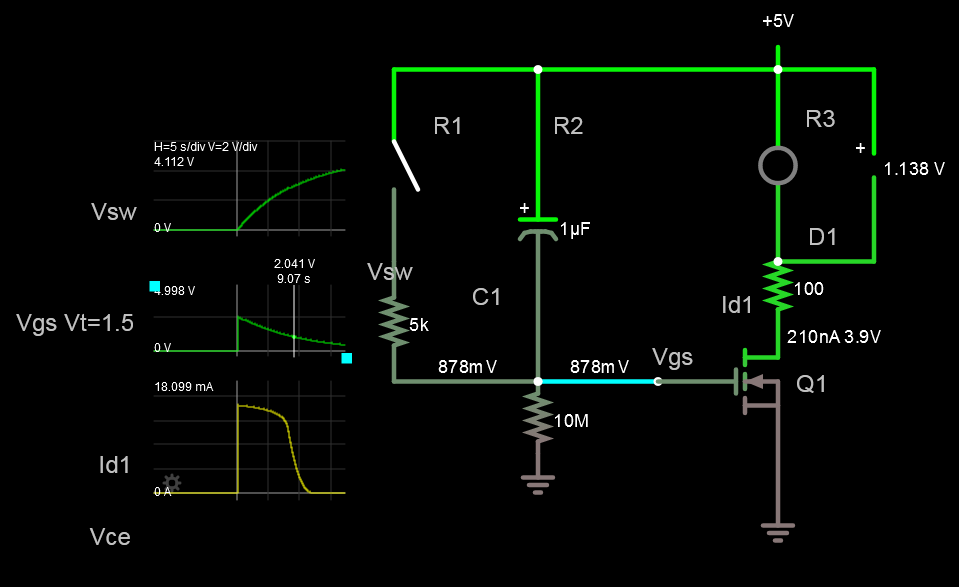 1
How to read a schematic with capacitors

5
How to explain basic transistor, diode etc. principles to High Schoolers
0
Transistor help
2
Why does 3-to-5 volt with transistor not work the way it should?
0
Understand 2 transistors (NPN & PNP) flasher circuit working
3
Original 555 timer transistor output implementation
2
How does the PNP transistor in this IR receiver circuit work?
2
Low Signal from Single Transistor Pierce Oscillator Mysteriously Turns High
0
Where does Zi = hie+1(1+hfe)RE come from in a BJT from Hybrid Model?