What are these types of logic diagrams called? 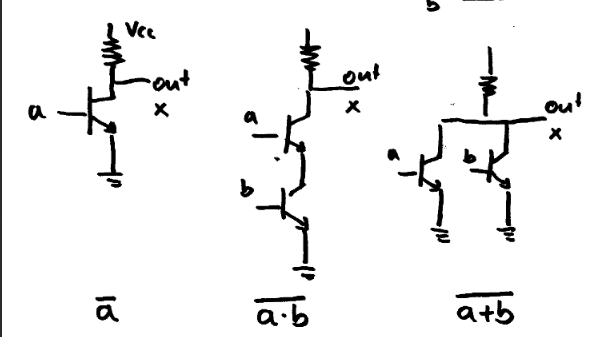 They are not quite "logic circuits" because when I look that up I get mostly the ones with logic gates drawn, not the transistors and such like these.

Also if I wanted to find a book that would teach me specifically about transistors and understand these types of circuits specifically, not digital systems in general, what should I look for? Any recommendations?

It was a simple question. Requires a simple answer...

This are schematics of simplified logic gates built using discrete components. From left to right they are NOT, NAND and NOR.

Figure 2. Logic gate symbols NOT, NAND and NOR.

The symbolic representations allow the designer to concentrate on the logic operation rather than the electronic operation of the circuit.

Table 1. Truth table for NOT.

Table 2. Truth table for NAND and NOR.

What would you like to know about transistors exactly?

The ones shown in your diagram are called NPN transistors.

They consist of three pins: base, collector and emitter.

A small current applied to the base of the transistor creates a much larger current between the collector and the emitter.

Therefore they can be used as both switches and amplifiers.

You could always just Google transistors and see the different types.

As others have said, those in the picture are in fact schematics, or schematic diagrams. They represent with symbols actual, physical components with their connections.

I'd like to add one more detail regarding the specific type of circuits represented in the pictures. They are a form of logic gates (it depends on the input signals, but that's the meaning of the captions), built with the resistor-transistor logic (RTL). Compared with complementary logic (or TTL by transistor-transistor logic), the RTL logic only uses pull-down or pull-up transistors with the other branch made by a resistor. This simplifies the circuitry, at the expense of performance (speed, area, power efficiency).

I think you are looking for Schematic Diagrams - they show the detailed connections between individual components - transistors, resistors, capacitors, etc.

If you are using digital integrated circuits, a schematic will show the gated symbols. In schematics, more complex ICs will be shown as blocks with many connections.

The sketches you show are simple schematic diagrams.

I read the original requests as the OP wanting some reasonable search terms (for Googling, for instance) to find schematic diagrams of circuits that implement logic gates.

This would appear to be analogous to "audio amplifier circuits", but this search would more likely actually provide circuits that implement amplifiers.

This sort of ambiguity can turn up any time you use a noun to modify another noun with no preposition or other phrasing to connect them.

But because circuits can be used in a modular manner within more complex circuits terms like "logic gate circuit" are much more ambiguous.

Having said all this, no I don't have a solution to this problem. Even appropriate use of prepositions and such likely would not help because these tend to be ignored by search engines.

Not the answer you're looking for? Browse other questions tagged digital-logic circuit-design or ask your own question.

5
Going from Transistors to Gates to.....IC's?
6
Why are sum-of-products implementations more popular than product-of-sums implementations?
3
What are the rules for combining transistors to form digital circuits?
4
What makes a circuit digital?
3
How to implement a function using just NAND or NOR logic gates
16
What is the lowest level of CPU programming above transistors?