minimum-working example for schematic diagram of a compressor

My son recently noticed that the lights dimmed when the refrigerator turns on. This question has been posed elsewhere [1]. The responses in [1] do not meet my needs.

In my humble opinion, to satisfactorily answer explain how come the lights dim, I must first know what is the simplest schematic diagram of a compressor. It appears that there is a circuit diagram in [2]...

The motor draws a higher current when it is switched on. That would happen even if it was not connected to anything. The high current persists for the time required for the motor to reach full speed, a fraction of a second or perhaps slightly more than a second. The fact that the load is a compressor influences the time, but probably not by enough to be important in this context. The refrigerator likely has the largest motor in the house other than the central air conditioner.

For the purpose of explaining why a motor draws a high current while starting, use the schematic shown below provides a simple explanation. The motor consists of a resistor and a generator that generators a voltage that opposes the supply voltage. The voltage is proportional to speed. When the speed is zero, the opposing voltage is zero and the current is high. As the speed increases, the opposing voltage increases and causes the motor current to decrease.

That diagram would apply best to a permanent-magnet DC motor, but it should serve well enough for an induction motor in this context.

The actual light dimming can be explained as the high current starting the motor briefly overloading the supply. Alternatively, you can include wiring resistance and a light in the schematic. 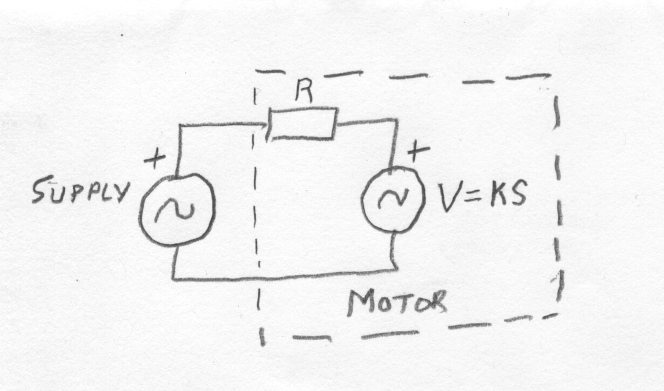 For a more comprehensive equivalent circuit, refer to my answer to: When load increases in rotor of induction motor how does stator draws more current?

The equivalent circuit for one phase of a three-phase induction motor is presented there. It contains the expression Rr(1-s)/s that is a resistance representing the mechanical load driven by the motor.

In that expression s is the motor's slip, the difference between the speed of the rotating magnetic fields and the relative speed of the rotor. When the motor is switched on, the rotor speed is zero and the speed of the magnetic fields is 1, so the slip is also 1 and the portion of the circuit representing the mechanical load has zero resistance. That means that the remainder of the circuit determines the current. That represents a low impedance, so the initial current is high.

As the motor speed increases, the value of s reduces from 1 to about 0.03. That results in a higher resistance that reduces the motor current, but absorbs most of the electrical power that is transferred to the motor from the source.

Here is another question in which my answer uses a more simplified version of the equivalent circuit for a three-phase induction motor: Why does an induction motor draw more current when the load is increased?

Here is a greatly simplified schematic and simulation. The motor starts at time = 1 second. Half a second later when the motor has started up, the load drops.

The house wiring resistance will cause the voltage to sag when a large load is applied. 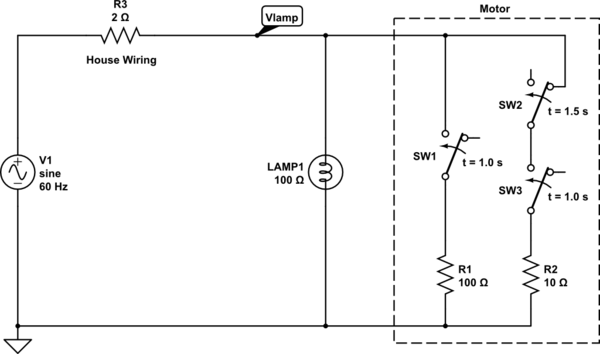 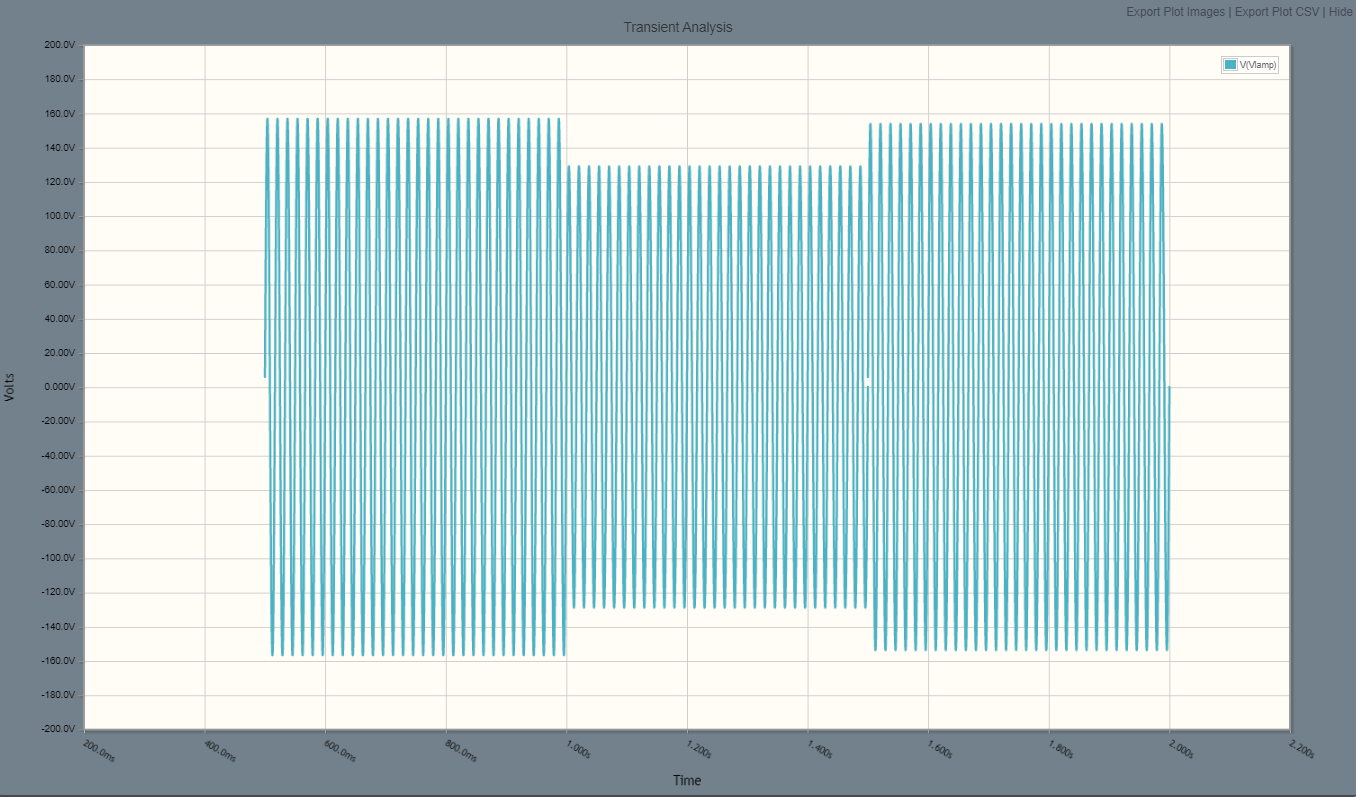 By $R_T$, I denote the total resistance across the voltage supply.

Conclusion: Power dissipated by load is smallest during the interval from $1~s < t < 1.5~s$.

A compressor has a motor and the motor is attached to a load that has torque that has to be overcome to get it to rotate because of the piston compressing on each rotation. From this site: 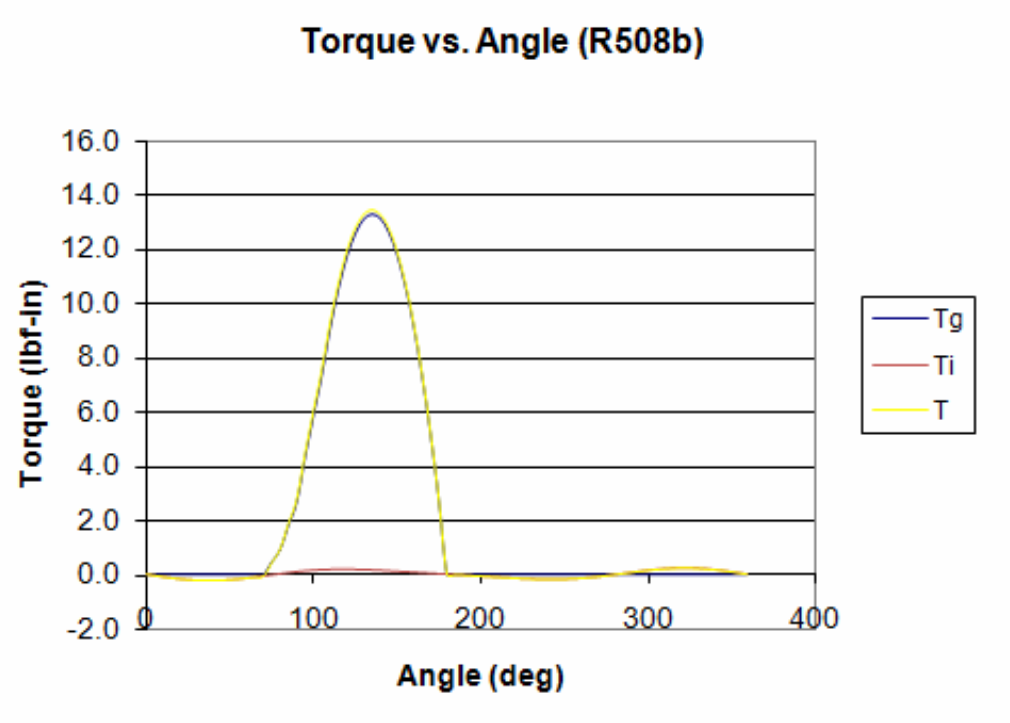 Once the motor starts rotating at a reasonable speed, the inertia of the parts helps overcome the torque as the piston compresses the refrigerant, but as it is getting up to speed there is a large current draw. That causes a voltage drop in the wiring and would possibly cause the circuit breaker to open if it continued (say if the compressor was stalled).

Lights may be more sensitive to voltage than you would expect from the voltage drop, for example a 10% drop in voltage may cause a very visible drop in light intensity.

As far as a model goes, you could model the system mechanically with SPICE. The motor current draw is strongly dependent on the RPM (because of back-EMF) so it draws maximum current when stalled. The motor torque is approximately proportional to the current draw. And the compressor could be modeled with the above torque angle curve. So as the motor-compressor combination winds up from start there would be large pulses of current that quickly increase in frequency and simultaneously get smaller as the motor gets to speed.

Note: I don't think domestic fridges have an unloader, but larger A/C units and larger air compressors typically have a valve that relieves the compression until the motor and compressor parts get moving. Maybe someone can correct me if that is wrong.

Here is an interesting video of the internals of a fridge compressor.

Usually the light dimming issue is not noticeable because the fridge is on a different circuit than the lights. The DIY SE would have more to say about those considerations.

Not the answer you're looking for? Browse other questions tagged schematics induction-motor or ask your own question.

19
Industry Practices for Schematic Design?
1
Can any one say which Schematic Software is used for this Circuit diagram
3
The usage of chip topography and diagram(schematic)?
0
Schematic Check for Color Organ
4
Schematic layout for inline and pull-up/down resistors
1
Schematic shows two outputs for Vout. Why?
2
What does this symbol in a schematic diagram mean? (wire through circle)
8
Schematic conventions for different supply rails