I have some doubts about the termal noise of a real resistor.

The equivalent model of a noisy resistor is this one (here the reference):

Here there is the model of a noisy resistive network: 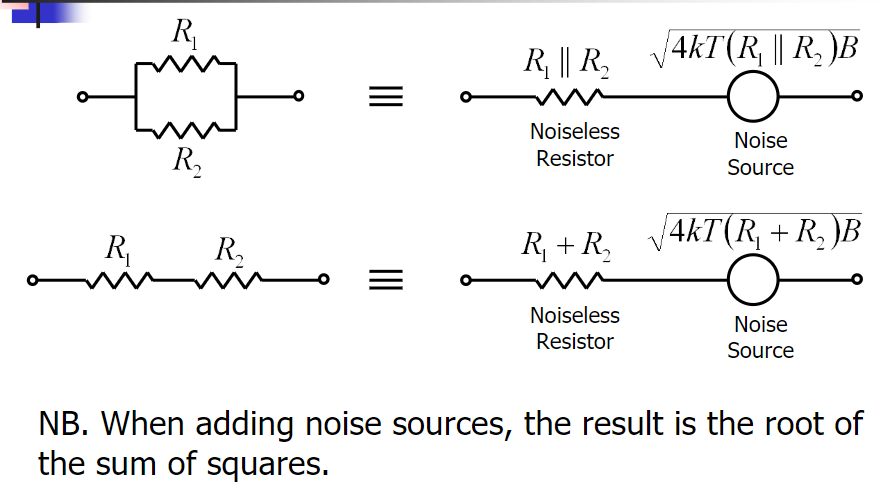 1) From the previous relationships for parallel and series resistances, we see that it is possible to add the noise powers of each resistor included in the network. But this is true, from a signal processing point of view, if and only if the Cross-correlation of those noises is 0, i.e. the noise of each resistor is uncorrelated with others. Why is it true?

2) Thermal noise is white noise (approximately), i.e. its power spectral density is constant with frequency. But this means that its autocorrelation is a dirac delta, i.e. a single pulse. It seems quite strange to me: I'd say that its behaviour is like the following one (which is also what I have found while searching "Time domain simulation of thermal noise"): 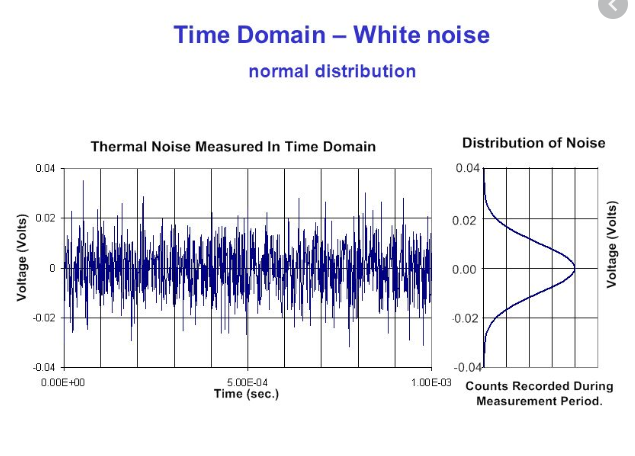 Thermal noise is also known as Johnson noise, Nyquist noise, resistance noise and variations thereof. An excellent characterization of thermal noise is due to Davenport and Root 1: “The randomness of the thermally excited motion of free electrons in a resistor gives rise to a fluctuating voltage which appears across the terminals of the resistor. This fluctuation is known as thermal noise. Since the total noise voltage is given by the sum of a very large number of electronic voltage pulses, one might expect from the central limit theorem that the total noise voltage would be a gaussian process. This can indeed be shown to be true.”

So, the noise is gaussian distributed, as shown at the right side of the OP's second figure.

Slightly more generally, thermal noise is the noise voltage produced due to thermal motion of charged particles in conducting media. For a conductor having impedance Z, only the real part of the impedance, Re{Z}, generates thermal noise. Thermal noise is zero at absolute zero and would be zero in perfect conductors, because then Re{Z} = 0. The bilateral noise power spectral density (PSD), denoted by \$S_n(f)\$ and having units of \${V^2/Hz}\$, is given as 2: 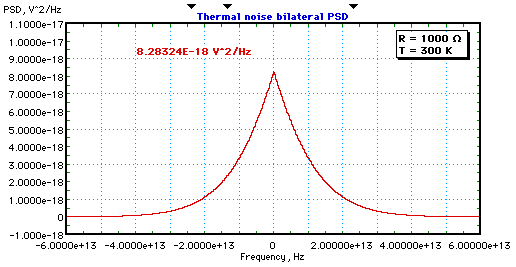 The mean thermal noise voltage is zero, in compliance with the Second Law of Thermodynamics, and the variance, which equals the mean square voltage because the noise voltage has zero mean, is 2: 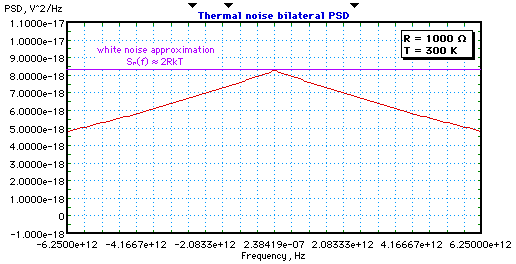 which is also shown above. The conventional unilateral noise PSD, \${G_n(f)}\$, is defined as:

(1) the resistors are physically separate. Thus the motions of electrons jumping orbits, or jumping from atom to atom, or grain to grain, will not be correlated.

(2) The 3dB frequency for electron (thermal) noise is about 200 Terahertz, because the electron jump time is a few femto-seconds.

1) Brute force calculation brings the result for you. If you take the definition of the RMS voltage and apply it to a sum, say A+B where A and B are different random voltages, you have (A+B)^2 to be integrated, That's A^2 + 2AB + B^2. The integral of a sum is the sum of integrals. But the product AB as integrated reduces to the cross-correlation function at delay=0 and that's zero if and only if A and B are independent.

2) Autocorrelation at zero delay (or R(0)) =Dirac's delta is true for the theoretical infinite bandwidth white noise because it has infinite power and the voltage can vary infinitely fast. No simulations can have such signal.

Generally R(0)= the average power (to 1 Ohm). R(T) where T is not zero should in practice finally give something if T is small enough because limited bandwidth prevents the signal to vary infinitely fast.

I guess you should read something about stochastic processes. Every elementary communication theory book at university level uses them and very likely also explains their basics in an introductory section.

Not the answer you're looking for? Browse other questions tagged resistors noise signal signal-processing thermal or ask your own question.

0
Noisy data line clears up on wiring up multiple output pins of uC to Logic Analyzer
2
Thermal noise (Johnson noise)
2
How can shot noise be dependent on dc current, not instantaneous average current?
1
Power supply noise problem in a measurement system
9
What are the calculations to do in practice to estimate beforehand the noise seen on the output of this op amp circuit?
0
Differential Pairs and GND
0
How to plot thermal noise in the time domain?
1
Total noise in an amplifier with multiple noise sources
2
Johnson Noise in Differentiator: Does the input C have an effect?