Does the electron beam go towards the deflection plate with the higher, or the lower voltage?

So I've started tearing apart an old CRT scope to learn everything about them, and right now looking at the voltages on the deflection plates. When the trace goes down, my vertical plates read (a)193v, and (b)130v. When the trace is all the way up, A is 106v, and B is 188v. When trace is in the middle, both read around 157v.

So I can tell that giving the two plates different voltages is causing the electron beam to gravitate towards one (or push away from the other.) Which way does it go? Is it being attracted towards the higher voltage, or the lower one? I can't tell which is which because I cannot see inside the tube, because of that annoying black coating inside. I really wish I could see those deflection plates. 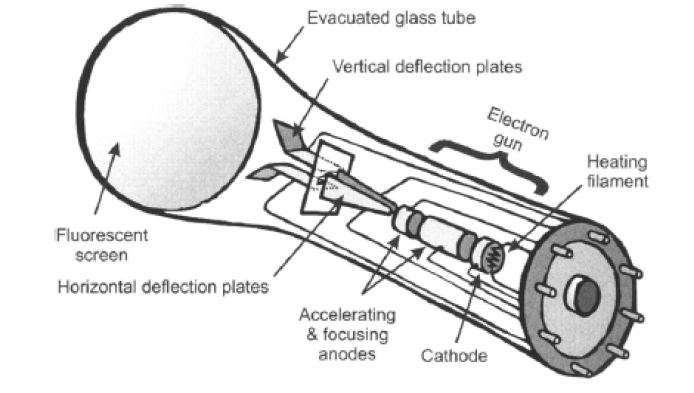 The above image is taken from a book by David Prutchi and his daughter Shanni R. Prutchi, "Exploring Quantum Physics thought Hands-on Projects," which I highly recommend to you. It's Figure 48 on page 70 of the 1st edition, 2012, by Wiley.

The starting point is the cathode, which includes a filament that boils electrons off of its surface. This is called thermal emission. The filament is often made from tungsten and coated in such a way to improve the emission of electrons into the vacuum space around the filament. There is usually a Wehnelt (basically a "cap" with a hole in it) that is charged in such a way as to "encourage" still more electrons. This is called ionic emission. Together, the entire Wehnelt system produces what is called thermionic emission of electrons. (A way of saying both thermal and also ionic emission, at the same time.)

The electrons that escape through the hole in the Wehnelt are accelerated and focused by the anodes in the picture to create a beam. Fancier systems will also use magnetic focusing (used in electron microscopes, for example) that depends upon either fringing fields in a gap or else other forms of actively changing magnetic fields.

These electrons are now accelerating rapidly towards the fluorescent screen (which is highly positively charged.)

One of the key elements here is that the vacuum itself must be below 100 milliTorr. Otherwise, the interference by atoms in the tube will prevent a bright spot from forming on the screen. Refrigeration vacuum pumps can be used here. For example, the Robinair 15600 pump is rated to achieve 20 milliTorr with their own vacuum oil. (But you can achieve 1 milliTorr if you use this exact same pump with a better "Kurt Lesker TKO 19 Ultra" vacuum oil, instead.)

The force on the electron is just the charge of the electron itself times the \$\mathscr{E}\$ field. If you take some measurements on your CRT, we could probably work out the deflection angle in more quantitative form. But that is the basic idea for electron deflection. (Keep in mind that no deflection at all will take place if the vacuum is over perhaps 500 milliTorr or 1 Torr.)

The electrons will be attracted towards the more positive plate and away from the more negative plate.

The electrons are attracted more strongly toward the more positive plate.

Not the answer you're looking for? Browse other questions tagged oscilloscope high-voltage crt or ask your own question.

2
Why would a power supply mess with my scope?
6
Not able to read SPI signal with digital oscilloscope
3
How does an electron beam move in XY mode?
2
are there 2 basic-type of CRT deflection-yoke coil?
3
How does a CRT television flyback really operate
0
Oscilloscope range affecting voltage reading
2
Why doesn’t the focusing anode diverge the electron beam again?
0
What was the point of an “alignment scope” like Kikusui 5091, and can anything be done about it's dismal horizontal bandwidth?