Misconceptions about layout of DC to DC step-down converters

I have noticed, in my opinion, some misconceptions in the layout of the majority of DC to DC step-down converters.

The voltage at point A and point B in respect to ground are (usually) the same, so the current is much lower than the output at the trace C.

So, why do many engineers use thicker trace for those nets? Am I missing something? 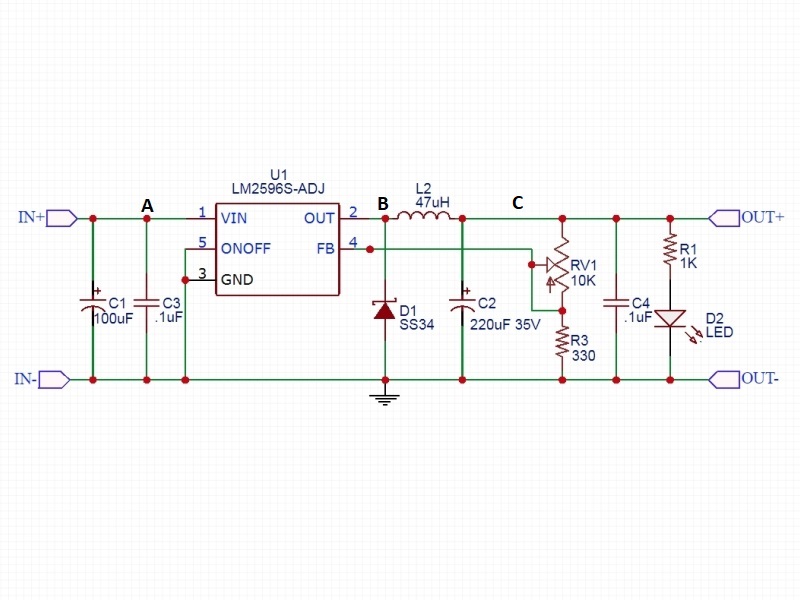 Moreover, in many PCBs especially high density boards the power components may be seperated in both sides which I think they should be on the same side. And the input loop should share the same ground path with the output loop. Is that correct?

Wider traces exhibit less resistance, but more significantly less inductance. The lower resistance and inductance helps a little bit with efficiency, and a little more with ripple, but the larger gains are in EMC. A lower inductance trace radiates less, particularly in conjunction with a solid ground plane.

Trace at point A carries high di/dt current so it should have low inductance to the decoupling capacitor to minimize voltage spikes.

\$ e = L \frac{di}{dt} \$ and in dc-dc converters di/dt is pretty high so you want to minimize L. A few amps switched in a few ns with a few nH inductance = VIN drops a lot when it switches.

I've had a case where this trace was too long, so when the top FET in the dc-dc turned on, the high di/dt combined with trace inductance created a voltage drop that was large enough to basically crash and reboot the DC-DC chip. So, when output current exceeded a threshold it would hiccup. The fix was to lower the inductance between decoupling cap and dc-dc chip.

Not the answer you're looking for? Browse other questions tagged power voltage-regulator dc-dc-converter switching converter or ask your own question.

6
Is this a good layout for a 5A buck converter?
3
Sanity check: Input and output filter for a stacked pair of DC/DC converters
1
Step up converters DC or AC?
0
BD8043S Step down convertor
0
Step down voltage regulator uncertainties
3
Extent of ground plane beneath filtered DC converter?
5
Cause for failure after short circuit Step-Down Converter Input
0
Buck converter LC output filter contribution to phase margin
4
Which has less energy loss - AC step up/step down transformers or DC to DC step up/down converters?