Why is my linear pot is causing a non-linear voltage at my ADC input?

So I have a socket that connects an expression pedal to a simple input circuit that feeds a voltage to an ADC chip that I then read from a Raspberry PI. I've checked the resistance on the expression pedal and it's definitely linear (as per spec). While I move the pedal back and forth the voltage the ADC reads stays very high for most of the travel and suddenly drops to zero.

This is the circuit at the TRS socket: 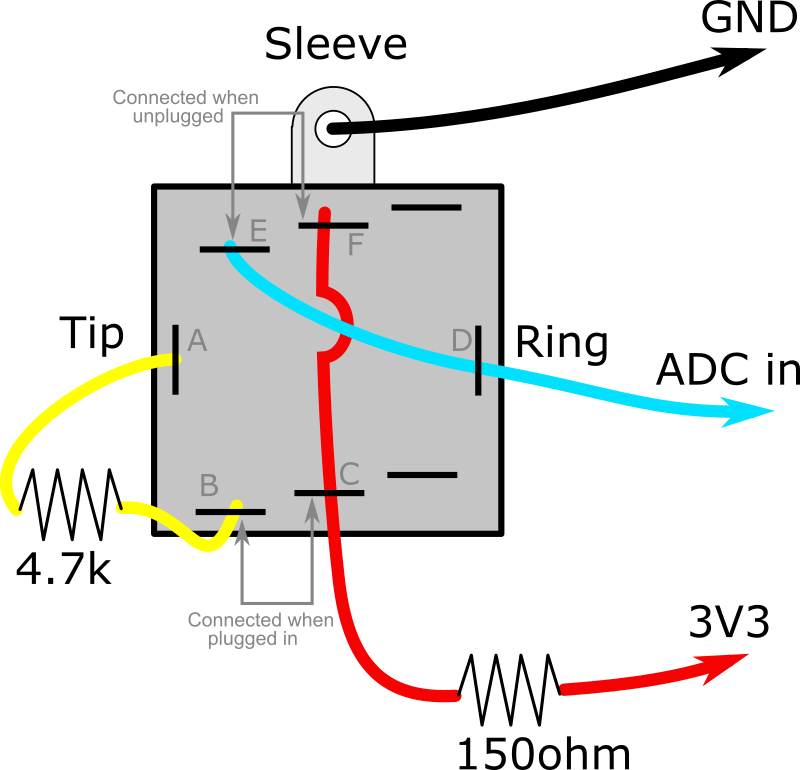 When plugged in the expression pedal forms a linear 100k potentiometer between A and D. When unplugged the 3V3 voltage passes from E to D and on to the ADC. This allows the software to know when there is no expression pedal plugged in (assuming values near 3V3 at the ADC). The 150ohm is because the plug is short circuited temporarily when plugged or unplugged and it limits the current (I blew up a Raspberry Pi before putting this in). I don't know if it's enough. But I'm not game to try unplugging in a powered up state yet.

Edit: I think what I've done wrong is swapped the tip and ring like this:

This is light of the "standard" expression pedal diagram:

I think it might work if I swap them. Will try tonight and update.

Note: Potentially there is another "hidden" resistor between R3 and R1's wiper. But that would be inside the expression pedal. And somewhat unimportant in the grand scheme of things.

I'm not going to attempt to read that mess but I think I know what JRE's getting at : you may have a circuit like this:

Which matches the symptoms you describe.

Not the answer you're looking for? Browse other questions tagged voltage-divider or ask your own question.