I'm working with the following circuit. It integrates a constant current, and when the output reachs a threshold, another circuit activates the switch, discharging the capacitor. The switch is simplemented with a transmission gate, and it is on long enough for the capacitor to discarge through the transmission's gate resistance. 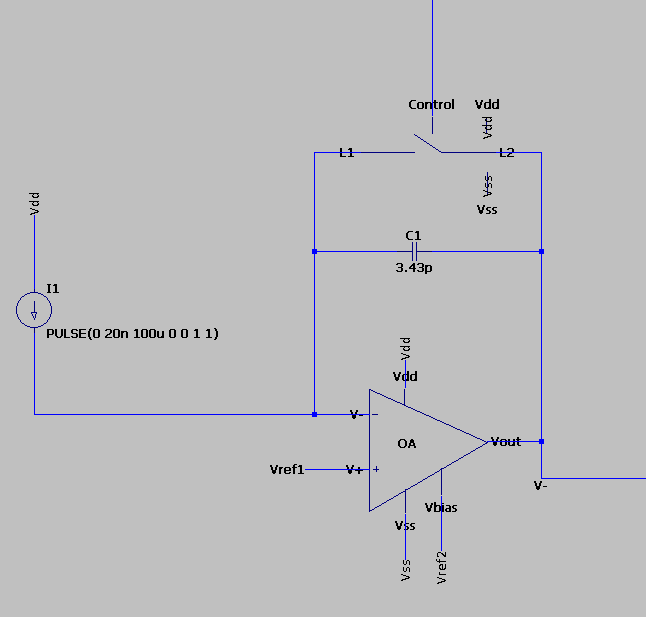 What I'm expecting, is that when the switch is on, the capacitor is discharged to 0V, thus taking the output to Vref1 (1,3V). This is what happens when I simulate with an ideal opamp

In red is the control signal, when it turns on, the capacitor voltage (cyan signal) goes to zero, making the output signal equal the voltage of the non inverting terminal, 1.3V.

However, when I replace the ideal opamp by another one designed by me (a simple two stage opamp), the signals behave unexpectedly, as shown in the following figures

The capacitor indeed discharges completley to zero, but the output signal does not change to 1.3V as expected. After the control signal goes to zero, all signals start to grow, until the ouput reachs almost Vdd (1.8V), as seen in the following figure

I suspect this is being caused by one of the parameters of the custom opamp not being ideal, but I don't know which one. I thought of the gain not being enough, but a simulation with another opamp with less gain resulted in an overshoot not so big, as it can be seen in this figure

With an opamp with less gain, the output is not settling at 1.3V as expected, but it settling at a much closer value than the opamp with higher gain. So, apparently, less gain gives a better result.

Any help is appreciated.

Here is the opamp implementation 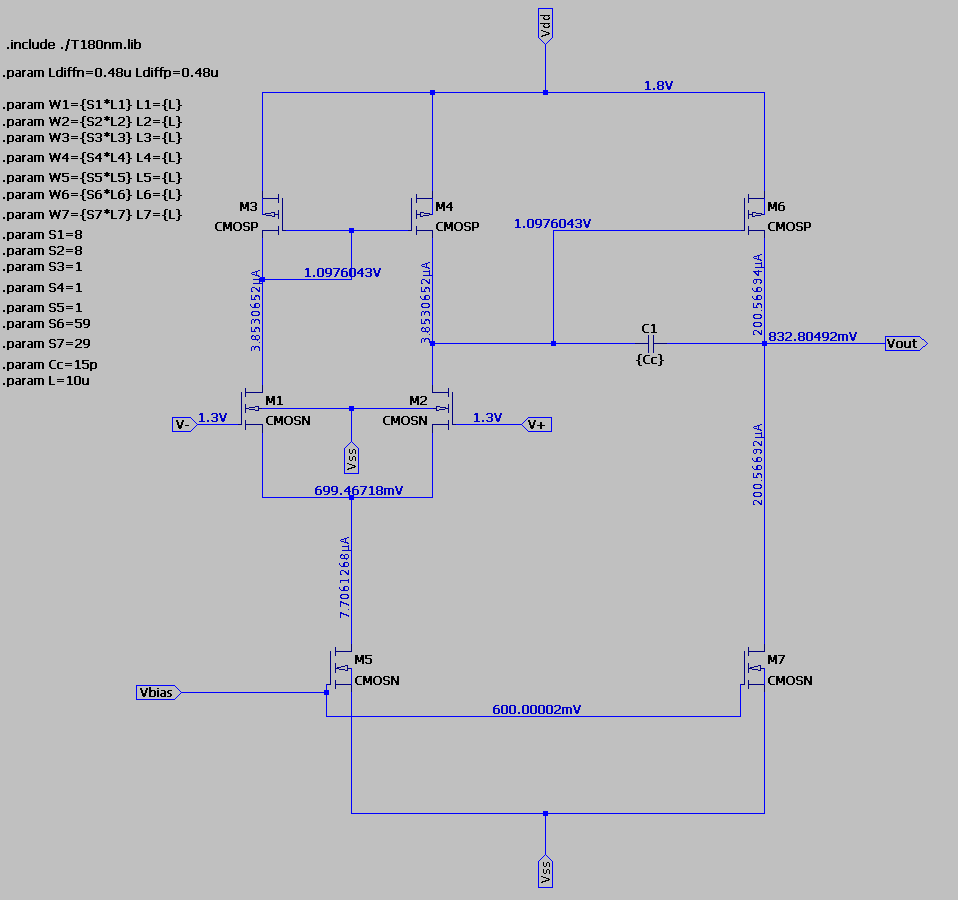 Your system is unstable because you have a pole in the right half plane, and the result is that the output grows unbounded.

Any non-ideal op-amp has a finite DC gain \$\ A_0 \$ and a finite bandwith (crossover frequency \$\ \omega_c\$ below infinity) such a non ideal op-amp can be approximated as a single pole low pass filter, with the following transfer function;

Any non-ideal op-amp also has a finite input impedance \$\ Z_{in}\$, which can be approximated by a parallel RC circuit;

And the input transfer function is;

Now let's combine it all to get the closed loop transfer function of the system;

Solving for the poles of the closed loop transfer function you will find that at least one situation where you have a pole in the right half plane (your system is unstable) is if;

This is easy to prove using simple (but painstaking) algebra, so I want bother with it here..

To sum it up; Your system is unstable because you have a pole in the right half plane.

The most simple solution would be to add a resistor in parallel with \$\ C_1\$ which is sufficiently small to make the system stable, while being sufficiently large to not cause an unacceptable error in your system. In general in order to be able to rely on the assumptions/simplifications we use when we design op-amp circuit, such as your integrator circuit, one of the things we require is that \$\ Z_{feedback}<<Z_{in}\$ which is not true for your circuit.

Not the answer you're looking for? Browse other questions tagged operational-amplifier circuit-analysis analog integrated-circuit circuit-design or ask your own question.